Conflicting reports, fake and inaccurate numbers, bizarre claims, nations in lockdown, and a virus that is acting differently now than when it began in Wuhan, China.

Many believe there is much more going on behind the scenes than we know about,  and with each new report and conflicting coverage, that belief is looking more probable every day.

Along with discussion regarding each of the aforementioned areas, as part of a reader request, we want to hear from you about what you think is going on, how dealing with this stressful time is affecting each individual while cooped up in the home or yard.

With so much coverage about COVID-19, is there something else going on that is weighing on your mind?

Reader thoughts to all the above are encouraged in the comment section below.

Let us provide clear examples of conflicting reports and numbers.

Using Avast Secure browser, which uses the Bing search engine, when searching for “COVID-19” a information box comes up which shows the “official” numbers of confirmed cases, deaths and recovered, in the U.S. A screen shot of that information box is shown below: 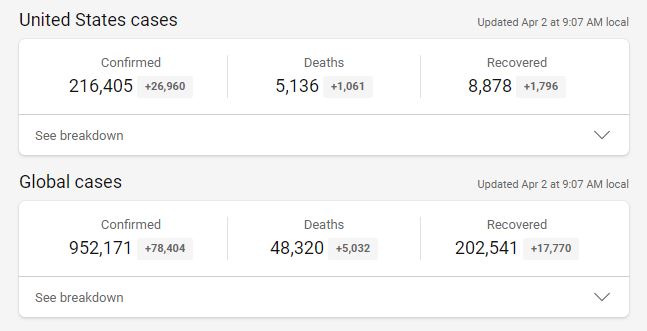 On Eve Of Small Business Bailout, Biggest US Bank Says It’s Not Ready To Accept Applications

Those are the numbers we see quoted by some establishment media outlets, while Wall Street Journal reports how Italy’s numbers, which are included in the “official” global numbers, are completely off and their death toll is far higher than what they have reported to date.

In the areas worst hit by the pandemic, Italy is undercounting thousands of deaths caused by the virus, a Wall Street Journal analysis shows, indicating that the pandemic’s human toll may end up being much greater, and infections far more widespread, than official data indicate.

It has also been reported that China has been manipulating not only their numbers of infected but also the “recovery” numbers.

But civil servants tell Caixan that businesses are actually faking these numbers. Beijing had started checking Zhejiang businesses’ electricity consumption levels, so district officials ordered the companies to start leaving their lights and machinery on all day to drive the numbers up, one civil servant said. Businesses have reportedly falsified staff attendance logs as well — they “would rather waste a small amount of money on power than irritate local officials,” Caixan writes.

In Wuhan, officials have tried to make it appear that recovery efforts are going smoothly. But when “central leaders” personally survey disinfecting regimens and food delivery, local officials “make a special effort” for them and them alone, one resident told Caixan. And in a video circulating on social media, residents can be seen shouting at visiting leaders from the apartments where they’re being quarantined — “Fake, it’s all fake.”

Even the Washington Post, has started questioning the numbers coming out of Wuhan itself, where the virus reportedly originated. Other recent reports confirm China has been rigging the numbers and covering up the truth, since the beginning.

Here in America, ANP has been informed by medical professionals that deaths that have occurred before they were tested have list cause of death as “acute respiratory failure,” and other causes due to the lack of testing or resources.

The point here is none of the numbers are accurate and there is a good chance that we will never have accurate numbers, yet the establishment media continues to cite those “official” numbers even as other headlines from the same sources, provides information that contradicts their own reports.

They expect people to not notice or to wave it away because they themselves are refusing to acknowledge just how bizarre the MSM’s reporting on this has been since the beginning.

We also have seen readers mention another tidbit of strangeness that the general public, those that still seem to trust the MSM, completely ignores.

Pastors in Florida and Louisiana are being arrested for refusing to cancel church. Also in the headlines, inmates across the U.S. are being released from prison because of coronavirus. 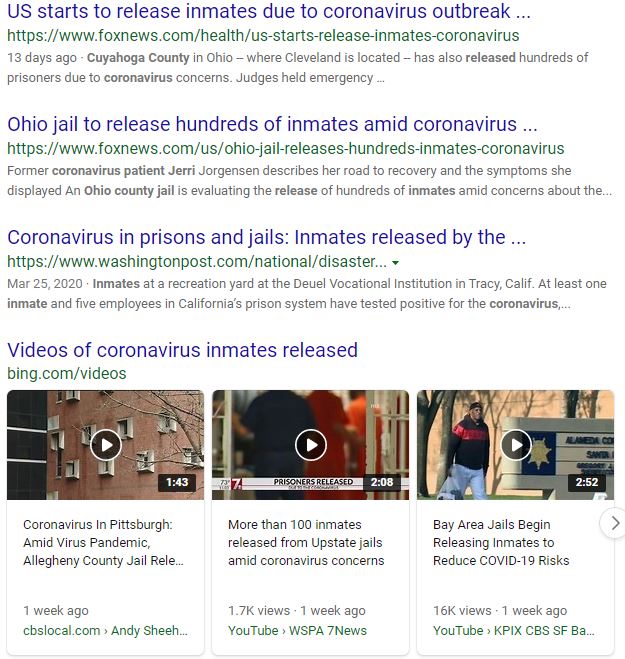 What Is America Going To Look Like With Tens Of Millions Of Unemployed Workers?

Arrest the preachers but release the criminals. There is something seriously wrong with this picture.

Other reports that conflict with the preferred media narrative include how all early reports highlighted how the elderly were more at risk than others of contracting COVID-19, yet new reports indicate that a significant percentage of those being admitted into the hospital are younger than originally reported.