For some, the ugliest aspects of their humanity, or lack of,  seems to come out during a time of crisis. For others the reality of the crisis can bring about depression, fatigue and anger before their innate spirituality comes out and then their best shines through.

After browsing through the news, the comment section, social media and different forums, we have found it all, “the good, the bad and the ugly.”

The wicked witch of Benghazi has managed to top all the ugly to date with her latest example of evil.

HILLARY CLINTON WINS THE PRIZE FOR THE UGLIEST

We’ll start with the ugly so we can end with the good since we are noting many describing how “quarantine reality” is starting to set in and a type of “fatigue” is presenting itself. Plus, ending any piece with that image above, is definitely not the last visual we want to leave readers with.

That would be cruel.

Since news of the COVID-19 coronavirus spreading to America was first reported, we have seen some horrible people saying some horrible things.

Democrat politicians calling to have the coronavirus deliberately spread at President Trump’s campaign rallies. The Liberal media politicizing COVID-19 because they want it to harm President Trump’s “winning” record. Liberals wishing that the virus would decimate “Trump states” meaning states that went to President Trump in the 2016 Presidential election. Activists expressing hopes that Trump supporters would catch the coronavirus.

There is no shortage of examples showing the nastiness, the ugly comments, the lies from the media, and the utter lack of basic humanity being shown in this time of crisis….all because to them, ORANGE. MAN. BAD.

The prize for the ugliest of ugly goes to Hillary Clinton, where once again her bitterness over losing the 2016 presidential election to President Trump is once again on full display.

In a recent tweet sharing a New York Times story titled “The U.S. Now Leads the World in confirmed Coronavirus Cases,” Clinton’s message above the story was “He did promise “America First.”

(PLEASE HELP SUPPORT ANP: With Independent Media being censored on almost every internet platform, reader donations are what keeps websites like ANP up and running.  Your donations are greatly appreciated. Thank you, Stefan & Susan.) 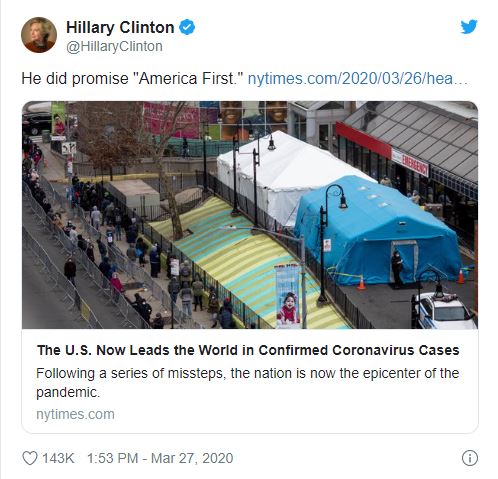 This follows a number of other tweets from Clinton that attempted to undermine the President of the United states during a time of crisis and uncertainty.

How morally deprived does a person have to be to basically celebrate America suffering, all because the woman is so bitter, ugly inside and evil?

Never have I been so happy that we dodged the bullet of a Hillary Clinton presidency.

One horrible aspect of this coronavirus spread has been seeing people taking advantage of the COVID-19 lockdowns by price gouging. Months ago, when the news first broke that the virus had spread globally, many of us tried to get people to add to their preparations, or even to start to prepare in a calm and methodical manner, rather than panic shopping, finding products that could no longer be found on the shelves of their local stores…….then we notice something horrid.

Some Amazon sellers were doubling and in some cases tripling their prices of sought-after products.

This became such an issue that Amazon actually suspended the accounts of thousands, and removed hundreds of thousands of products.

On March 1, the day after the first coronavirus death in the United States was announced, brothers Matt and Noah Colvin set out in a silver S.U.V. to pick up some hand sanitizer. Driving around Chattanooga, Tenn., they hit a Dollar Tree, then a Walmart, a Staples and a Home Depot. At each store, they cleaned out the shelves.

Over the next three days, Noah Colvin took a 1,300-mile road trip across Tennessee and into Kentucky, filling a U-Haul truck with thousands of bottles of hand sanitizer and thousands of packs of antibacterial wipes, mostly from “little hole-in-the-wall dollar stores in the backwoods,” his brother said. “The major metro areas were cleaned out.”

Matt Colvin stayed home near Chattanooga, preparing for pallets of even more wipes and sanitizer he had ordered, and starting to list them on Amazon. Mr. Colvin said he had posted 300 bottles of hand sanitizer and immediately sold them all for between $8 and $70 each, multiples higher than what he had bought them for. To him, “it was crazy money.” To many others, it was profiteering from a pandemic.

The next day, Amazon pulled his items and thousands of other listings for sanitizer, wipes and face masks. The company suspended some of the sellers behind the listings and warned many others that if they kept running up prices, they’d lose their accounts.

The worst of humanity comes out during a crisis, then again, so does the best in some.

Another aspect of the “bad” is how self-quarantining is affecting people mentally and emotionally.