America Under Occupation And At War! Former NYPD Commissioner Warns Of Martial Law & An Authoritarian Govt – Millions Of ‘Coronavirus Mary’s’ Could Be Infecting Others

While President Trump hopes to ‘reopen’ America in full by Sunday, April 12th according to this recent Daily Mail story, as we had reported on ANP back on January 27th, almost two full months ago now, all the official numbers we’ve been seeing of people being infected by the virus are about two full weeks behind ‘reality’. Due to an incubation period of up to 14 days in many people before they even show symptoms with others not showing symptoms for up to 27 days with those people putting us nearly a month behind ‘reality’,in many if not all of those cases, infected people are walking around spreading the virus to others without even knowing they have it.

So while two weeks away from now might seem like a very long time, especially for the millions of Americans across the country now under some sort of ‘lockdown’, just imagine how things are going to look in that two weeks, or a few days after those 2 weeks on April 12th, with the ‘exponential spread’ of the virus doubling the numbers of infected nearly every 3 to 6 days and nowhere near enough tests in America to test everyone who is feeling sick and who wants to be tested.

As Mike Adams had reported in this March 23rd story over at Natural News, based upon the trend of already confirmed fatalities in America, there may already be 10 million Americans or more infected with the virus. And with only 55,000+ confirmed coronavirus infections in the United States this very moment, that would mean there may be nearly 10 million infected Americans who don’t even know it, yet spreading it to others.

With an ‘R-naught’ number of approximately ‘6’, meaning every infected person can potentially spread it to 6 other people who will repeat the process over and over again, and now doctors and other health care workers becoming ill with the virus as Natural News also had reported in this new story, just imagine how many of medical workers nationwide will also fall ill in the next two weeks with that 14-day to 27-day incubation period and coronavirus finally taking hold in America with us to soon pass both Italy and China in the numbers of infections if current patterns hold up.

So while we’d love to see the lockdown end and America return to our freedom to assemble and to ‘normalcy’ as soon as possible, as even Bill Gates recently warned as was reported in this CNBC story, “It’s very tough to say to people, ‘Hey keep going to restaurants, go buy new houses, just ignore that pile of bodies over in the corner.” Even a broken clock is right two times a day!

(ANP NEEDS YOUR HELP! Due to unforseen medical expenses following Susan Duclos’ heart attacks and hospitalization, All News Pipeline will need some financial help in the days and weeks ahead. So if you like stories like this, please consider donating to ANP to help keep us in this ‘Info-war’ for America at a time of systematic censorship and widespread corruption.) 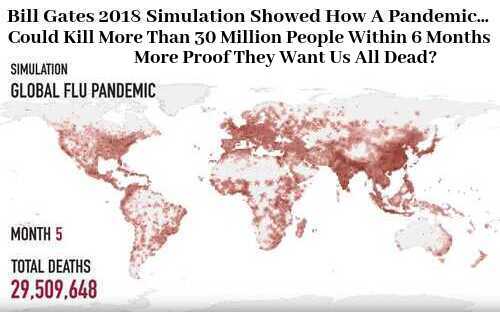 According to this new story over at the Daily Mail, former NYPD Commissioner Bernie Kerik is now warning that the NY city government of mayor Bill de Blasio wants to establish an authoritarian government in the city with the imposition of martial law ahead. Just the latest warning of corrupt government’s using this crisis as an opportunity to lock down a population and impose their own tyrannical will upon the masses, as we had reported in this March 24th ANP story, we also need to walk a very fine line and perform a balancing act to keep our civil liberties and the US Constitution intact while attempting to prevent a pandemic of mammoth proportions from taking down everything in America. From this Daily Mail story.

Former NYPD Commissioner Bernie Kerik has said Bill de Blasio of trying to ‘scare the hell out of America’ with his comments on the coronavirus pandemic and says he wants to impose ‘martial law’ on the city.

De Blasio has long been criticized by the police department and its former chiefs for his seemingly relaxed stance on crime.

On Wednesday, Kerik tweeted: ‘Bill DeBlasio is doing everything in his power to scare the hell out of the American people, impose martial law, and turn New York City into an authoritarian government.’

Gov. Andrew Cuomo has been leading the charge on state by state responses to the crisis and has spoken often and passionately of coming up with an ‘intelligent’ plan to try to stunt the virus growth but also let people return to work.

Before issuing a 100 percent shut-down of non-essential business employees, Cuomo resisted it for days. De Blasio, however, was quick to discuss issuing a ‘shelter-in-place’ order for the city of New York. He also said that martial law was on the table.

Even if he’d done it, it needed Cuomo’s permission to go ahead. Cuomo has also rebuked use the terminology ‘shelter-in-place’, saying it’s appropriate in active shooter situations or when the air quality is so low it is dangerous for people to go outside.

Yet if Covid-19 really is a Chinese bioweapon as Dr. Francis Boyle has reported numerous times, and a bioweapon that had required bio-safety-level-4 equipment to be safely handled as most of China’s own doctors were dressed in while handling patients in China, then America’s doctors, nurses and hospitals are all being set up for a major fall in the days and weeks ahead and quite possibly prior to April 12th, the day that President Trump hopes to ‘re-open’ America.