TDC Note – In a word – derivatives. I’ll bet a dollar to a dime that Austrian bank that blew up three years ago, that was tied to Deutsche Bank through derivatives, finally found it’s way home. Back in September 2019 when the Federal Reserve began the REPO Madness they were attempting to fill an un-fillable hole and beginning in January 2020 it was spreading faster than the virus and infecting banks worldwide. Now, it doesn’t matter how much monetary heroin is injected, the damage is done and it’s about get serious.

QEnifity or said another way

Coming into Monday, the Fed had a problem: it had already used up half of its entire emergency $700BN QE5 announced last weekend. 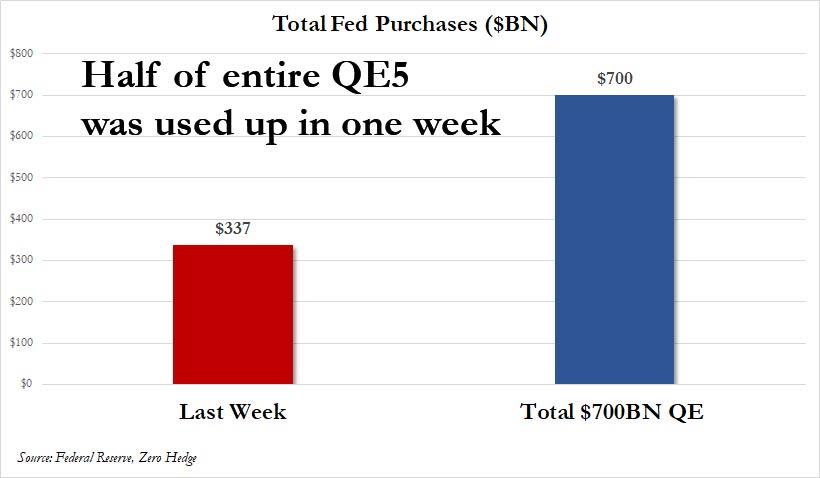 Which, together with the plunge in stocks, is why at 8am on Monday, just as we expected – given the political cover they have been provided– The Fed unveiled an unprecedented expansion to its mandate, announcing open-ended QE which also gave it the mandate to buy corporates bonds (in the primary and secondary market) to unclog the frozen corporate bond market as we just one step away from a full Fed nationalization of the market (only Fed stock purchases remain now).

Additionally, in addition to Treasuries, The Fed will buy Agency Commercial MBS all in unlimited size.

Coincidentally, this unprecedented action takes place just hours after real estate billionaire Tom Barrack (and friend of Trump) said the U.S. commercial-mortgage market is on the brink of collapse and predicted a “domino effect” of catastrophic economic consequences if banks and government don’t take prompt action to keep borrowers from defaulting.

“Loan repayment demands are likely to escalate on a systemic level, triggering a domino effect of borrower defaults that will swiftly and severely impact the broad range of stakeholders in the entire real estate market, including property and home owners, landlords, developers, hotel operators and their respective tenants and employees,” he wrote.

Barrack said the impact could dwarf that of the Great Depression… and now CMBS get their bailout.