It’s the wee hours of Friday morning, March 6, 2020 and I am tuned in to Bloomberg “Surveillance” business news host Mr. [CFR] Tom Keene.  Global equity markets are flat on their backs, crude oil prices are collapsing to multi year lows and the $US dollar looks like it’s preparing to do a swan dive into the Hudson River.  Thank god we have the likes of ole Tommy Keene and the rest of the globalist hacks from Bloomberg News and the traitorous Council on Foreign Relations to give us “lumpen” some reassurance in turbulent economic times.  As one of Tommy’s esteemed Bloomberg “experts” espoused this morning regarding the roiled global equity markets,

“We need something like [Warren] Buffet to come in and buy something for 10 or 20 billion to calm things [in the equity markets] down”.

But don’t worry folks, no matter what height the $US dollar takes its proverbial swan dive from – ole Tommy and Bloomberg and Co. will always be there to point out how money surging into the US 10 yr. bond yielding at historically low 74 basis points represents the foremost “safe haven” play in times of economic uncertainty by posting big banner headlines like this.

Watching the Big Lie play out, time-and-time again, is much like observing the hustle of a street addict conman looking for his next fix, coercing people to accept and believe the notion there is “safety” in debt obligations that the issuer has absolutely ZERO intention of ever repaying with fair value.

Now that we’ve broached the topic of “fixes”, it provides a perfect segue for some thought and discussion on topic of precious metals pricing, which in the case of gold, its price is “fixed” twice a day in London.  To say, “the fix is in” when it comes to pricing of precious metals is a colossal understatement, but stating as much makes one the object of scorn, ridicule and the labelling of one being a “conspiracy theorist” –an important adjunct of the Big Lie.

Who Are These Conspiracy Theorists?

So who are these conspiracy theorists anyway?  Generally speaking, they are people who question the notion of the magic bullet in the Kennedy assassination or the official story of 9/11-the tale of 19 cave dwelling Arabs bringing down 3 New York skyscrapers with 2 planes while simultaneously striking the Pentagon with an alleged 3rd plane – making a bulls eye strike on the accounting area of said Pentagon where all financial records were kept that might explain the unaccounted for 2.3 Trillion missing dollars from DOD that Defense Secretary Donald Rumsfeld spoke of on 9/10 – one day earlier.

These same conspiracy theorists are also the type of folk who have for years documented MASSIVE financial malfeasance and currency debasement on the part of the US Treasury’s Exchange Stabilization Fund [ESF] in conjunction with the US Federal Reserve and Bank for International Settlements [BIS].  These [scoffed at by mainstream financial media] charges have basically made claims that too much reckless money printing would ultimately lead to the demise of the US dollar as the world’s reserve currency.  Never mind the fact that none other than the Office of Director of National Intelligence posted job opening last month seeking a qualified individual to evaluate the impact of the US dollar losing its status as the world’s reserve currency.

In the descriptive of the job opening referenced above, everyone should take notice of the segment, relevance to the intelligence community:

Maintaining the U.S. dollar as the world reserve currency is vital for the national security community. It enables the U.S. to impose and enforce sanctions on entities that violate treaties or international law – results are essential to counter-proliferation and counter-terrorism activities. Sanctions are imposed when countries or their citizens develop or expand weapons programs that are considered dangerous to the international community. Having U.S. dollar transactions settle through the U.S. gives law enforcement jurisdiction to investigate, charge, and convict criminals of financial crimes such as money laundering, fraud, and terrorist financing. Since the U.S. dollar holds value through time, it is the safest currency in which to conduct international business transactions. This gives the U.S. global economic dominance. If the U.S. dollar loses its status, these national security advantages disappear, leaving the U.S. vulnerable. This project could allow the national security community to prepare for and defeat scenarios that could prevent this economic crisis.

Admission the US Dollar Has Been Weaponized

At the risk of calling the US Director of National Intelligence a conspiracy theorist, the intelligence community clearly states that maintenance of the dollar standard is a tool that allows the US to threaten and impose its will on the world community.

As for the intelligence community’s claim that the dollar holds it value, let’s examine.  Using US government data, they are saying that $US 20.67 in 1913 is worth $US 538.61 in today’s 2020 dollars.  However, if one had purchased one ounce of gold in 1913 for $US 20.67 it is worth $US 1,684.00 today.  The boyz at US intelligence are, in Joe Biden parlance, lying-dog-faced-pony-soldiers.  Demonstrably, gold is a far SUPERIOR [more honest] currency to do business in and settle international accounts: 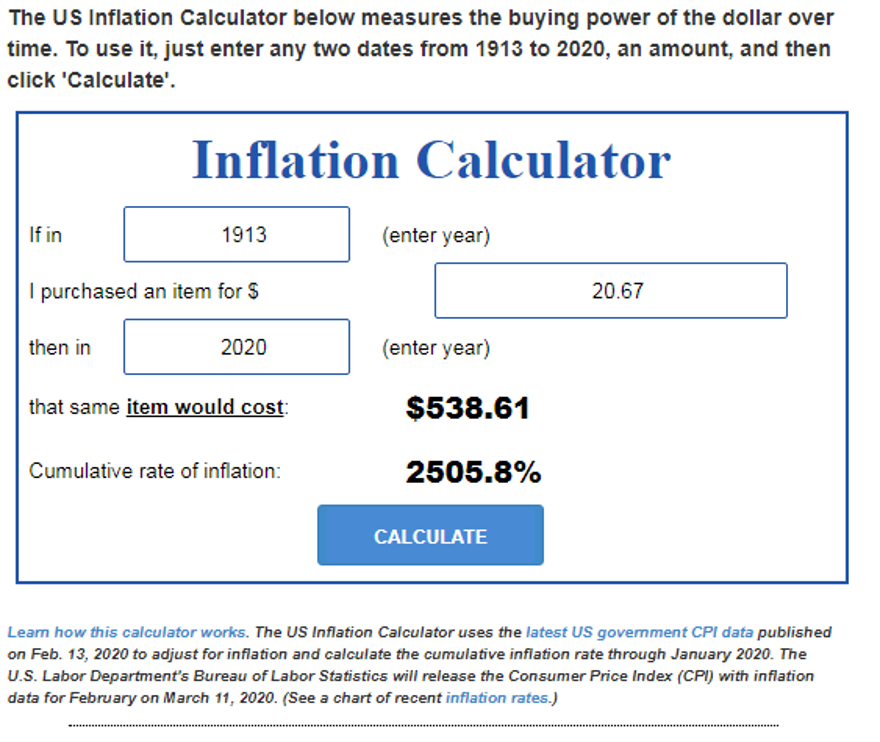 Remember the Big Lie everyone, now go buy your bonds and sell your gold.  The mainstream financial press would NEVER deceive you.