Pushing Gulags For Normal, Every-Day Americans To Be ‘Re-Educated’

– Todd Starnes: ‘When Bernie’s Goons Try To Throw You In Gulags, Engage Your 2nd Amendment Rights’ 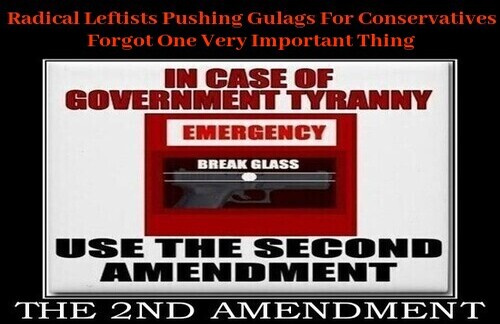 According to this new story over at The Hill, Vermont Senator Bernie Sanders has opened up a double-digit lead over all competitors in the Democrat party for the 2020 ‘D’ nominee according to this Morning Consult poll. With the Consult reporting that Sanders had actually become ‘the front runner’ for the Democrats despite the war going on within the Democrat party as Susan Duclos had reported in this February 13th ANP story, with many Democrats vowing never to vote for a socialist, 2020 is quickly setting up to be one of the most interesting and potentially volatile political years of our lifetime’s.

With Sanders racking up 29% of likely Democrat voters while Joe Biden could only manage 19% followed closely by Michael Bloomberg at 17%, the chances of the Democrats running a socialist whose political and economic policies are like nothing most Americans have ever seen before are growing every day now.

Yet with ‘the establishment’ Democrats within the DNC wanting absolutely nothing to do with Bernie and many sane Democrats running away from the Democrat party as was shared in this excellent opinion piece over at Medium written by a 20-year Democrat who ran away from the party after experiencing a President Trump rally, the chances of Bernie winning in November and unveiling gulags for Conservatives and President Trump supporters grows smaller every day.

So we’ll be taking a look within this story at the latest signs of potential trouble ahead in 2020 with everything on the line to the Democrats/globalists who sold out America for globalism with a recent warning coming to us from former Fox News commentator Todd Starnes who made far too much sense for most Democrats to understand when he stated during a speech to the Young Americans for Liberty.:

“When Bernie’s goons show up at your front door and try to throw you in a gulag, engage your Second Amendment rights and you invoke the name of that great patriot Clint Eastwood and say, ‘Go ahead and try punk. Make my day.’”

While Bernie pushes for ‘racial justice’ on his campaign website but leaves out ‘justice’ for anyone but ‘black, brown and indigenous Americans’, coming at a time when a 15-year old white American is being slapped and another man’s jaw is broken by a far-left Democrat simply for wearing MAGA hats, with one former NYPD detective beaten for just wearing a red hat, not even a MAGA hat, imagine what might be coming down the pike at us no matter who wins in November.

And now we learn that the ‘thriller’ movie “The Hunt” will be released on March 13th after having its former release date canceled because the movie depicts Conservatives being ‘hunted down’ and murdered by radical leftists. Giving Americans another reason to arm up now while we still have the 2nd Amendment in place, even America’s Founding Fathers fully understood that a day might come when the 2nd Amendment was needed to repel government tyranny.

With globalists and radical leftists threatening to burn down US cities while ‘setting America up for a bloodbath’ as William B. Stoecker had reported in this February 3rd ANP story, Conservatives, Patriots and President Trump supporters should prepare to defend America and their families and loved ones.

As Wikipedia had reported of the movie “The Hunt”, the original title of the script was Red State Vs. Blue State, a reference to the red states and blue states. Later, Universal issued a statement denying that the film had ever had it as its working title. Furthermore, the elite hunters’ reference to their quarry as “deplorables” is an allusion to the phrase “basket of deplorables”, used by Hillary Clinton during the 2016 United States presidential election campaign to refer to supporters of then-presidential candidate Donald Trump. From this story over at Citizen Free Press with the new official trailer for “The Hunt” as the 2nd video at the bottom of this story.