Self defense is a God-given right and unless “we the people” fight back, soy-boy Antifa thugs that form mobs to attack innocent people will win, every time.

Notice how Antifa members, supposedly “anti-fascists,” yet more fascist than anyone they accuse of being, never attack groups or events that have armed attendants, or bikers’ rallies, or other types of large patriot groups, or cities where it is legal to openly carry weapons?

Because they are cowards that can only terrorize people by forming mobs and harassing them, and getting violent the majority of the time. 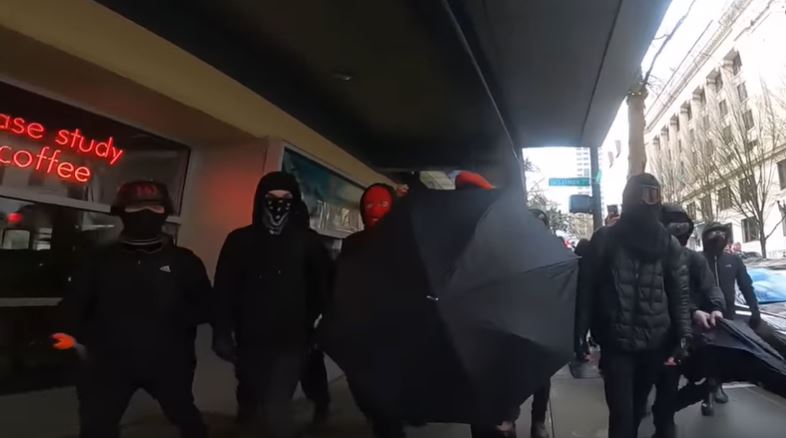 One specific city has more of a problem with Antifa groups, violence and riots than any other in the United States. That is Portland, Oregon. The reason Portland has such an issue is because the Mayor is a liberal coward, scared to death of facing off with Antifa members, and is known for forcing the police to stand down.

We have seen videos of Antifa members literally taking over the streets, harassing motorists, forcing them to detour and cursing and yelling at motorists that refuse to allow them to direct traffic. We have seen journalists attacked, even hospitalized from violent mob attacks.

Just a quick search over at YouTube for “Antifa Portland Oregon” brings up a cornucopia of videos from three years ago, two years ago, one year ago, nine months, seven months , six months….. Pretty sure you all get the point. Antifa owns Portland, Oregon because of a cowardly mayor and law enforcement that stands around and watches the majority of the time, without offering any help to the victims.

On Saturday, that happened again. A journalist from Stumptown Matters went to document an rumored rally by the Ku Klux Klan (KKK), and Antifa groups were planning a protest against the KKK.

On the Stumptown Matters’ YouTube channel the journalist explains what happens in the details of the 2 minute video.

On Saturday February 8th 2020, Stumptown Matters went into Downtown Portland Oregon to film and document the protest of a KKK rally that was reported to take place that day.

When I arrived at the scene, I learned that the KKK cancelled their event. I despise the KKK and racism in general. I was actually looking forward to siding with Antifa on this day. For they had real and legit racists to confront had the KKK followed through with their initial plans.

So ultimately I stood across the street from the Antifa Gathering and gazed upon them just to estimate the number of their turnout. which was probably 300 to 500 people. I was planning on leaving and I hadn’t even begun filming yet.

Then Luis Marquez called me out by name. I said hello and then I raised my camera to start filming the commotion. Then a masked group of 20 or more people began to spread out and cross the street from where Luis was standing and began to walk fast toward me. They had concealed objects or weapons in their hands. One of which was approaching me while shaking a can of pepper spray. I wanted no part of whatever intentions they had for me so I immediately abandoned my camera duties and sprinted to safety. I didnt want to be hurt or pepper sprayed and I didn’t want to hurt any of them either. So running was the only sensible action to me at that moment. People can call me a pussy all day long until they are blue in the face. That’s perfectly fine with me. I simply did not want to play and I got away unharmed.

My safe space happened to be the justice center where the riot police confronted me and told me that if I go back out where I was, then they wouldnt protect me. Implying once again that masked thugs run the streets of portland Oregon and if you are targeted by them, then you are the problem according to portland police.

Independent journalist Andy Ngo, who has been documenting Antifa’s terrorizing Portland citizens for years, and who had to be hospitalized for a brain injury after Antifa attacked him in 2019, explains the liquid that was sprayed on the Stumptown Matters’ journalist.

Ngo tweeted “The “orange liquid” sprayed over Brandon Brown’s face was bear mace. It’s an oil that burns & doesn’t easily wash off. Antifa have been using it as a weapon of choice in attacks against journalists they dislike. Brown did nothing to provoke this violence.” 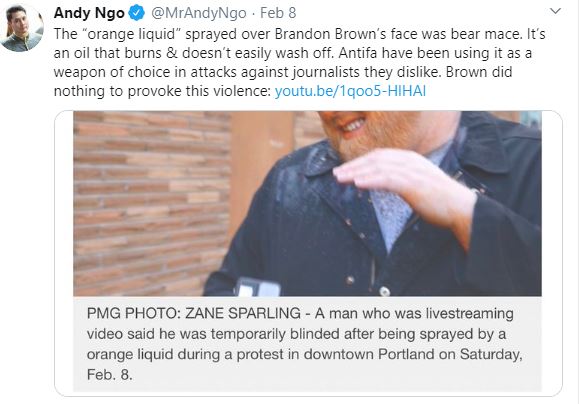