The Commodity Futures Trading Commission (CFTC), made headlines this week with their fourth attempt at passing into financial law position limits on 25 commodities derivatives and futures contracts.

The CFTC yesterday proposed commodity position limits of up to 25% of the deliverable supply of each commodity.

We’ll get into what that may mean for the COMEX silver market in a minute.

This latest CFTC move was mandated by US Congress Dodd-Frank Act law passed in the year 2010, has failed various times in passing over the last decade. The reason for why courts threw out past attempts is likely shrouded by the very real fact that major financial institutions and commercial banks have been filing lawsuits and stonewalling these ongoing position limit efforts.

Limits on market concentrations are not in the interest of those entities who consistently make large derivative gambling profits, often allegedly conspiring together at times. Some time so concentrated in their market-moving power, they can have the ability to move commodity and derivative market prices easily and thus profitably trade them while scalping often smaller, dumb money speculators on the other side of many futures contract bets.

While this latest news should theoretically cap the number of contracts that a single entity or participant on the COMEX, NYMEX might hold in an attempt to prevent speculators from causing unjustified price swings that impact US citizens and global consumers of real-world goods.

One only has to do a cursory look at the fractionally reserved COMEX silver bullion warehouse market share to see that JP Morgan has become dominant there since 2011. Now JP Morgan is the silver fractional reserve custodian of over 50% of the entire COMEX silver registered and deliverable bullion pile, see below. 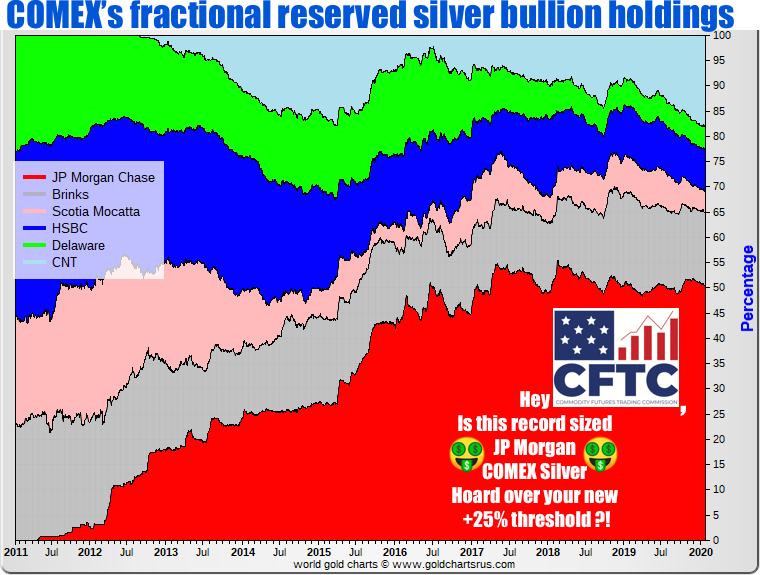 To us, it remains unknown as to what percentage share of this silver bullion is their clients and what is for their house account.

Also unknown, is this dominant physical COMEX silver warehouse position now going to be in violation or is the CFTC going to be told to pound sand yet again by the most systematically too big to fail bank of the land?

If you’ve been following the silver bullion market, you might recall that a former multi-year CFTC Commissioner Bart Chilton admitted last year in 2019 to Chris Marcus over at Arcadia Economics, that JP Morgan’s precious metals trading desk was at one point the holder of an intensely concentrated silver futures market contract position.

JP Morgan by sheer concentration dominated spot silver prices by holding over 40% of the silver futures market share after it had taken over Bear Sterns’ bankrupt silver trading desk in the spring of 2008.

That year, the spot price for silver went from over $21 oz falling to below $9 oz by late 2008 during the very bottoming of the global financial crisis. All this while at the same time the global physical and US silver bullion market was being overwhelmed by real silver bullion demand. It was common then to see multi-month delivery backorders, silver bullion dealers with no silver inventory to sell at all, and product price premiums for many silver bullion products nearly double the then quoted live silver spot price. The same spot price mainly being derived by the COMEX silver futures market, which again was supposedly back then and somehow claiming to still now be regulated by the CFTC.

Yes, I am sure we sound cynical here, but the CFTC is the same supposed regulatory agency which after 5 years of investigating the COMEX silver futures markets from the year 2008 until 2013, decided that its investigation was closed due to not finding any wrongdoings.

BTW does the @CMEGroup just tell you CBIP is extended. Y’all even have a say #CFTC?

Today we are not only going to dig into this bullion and precious metals related news, but we’re also going to look back at the very foundation of this now 45-year-old Federal Agency called most often by its acronym, the CFTC.

Hello, I am James Anderson of SD Bullion. And we are about to cover a verifiable fact regarding COMEX gold futures exchange conspiracy and the US Treasury going back to late 1974’s gold market, the year before the CFTC was put ‘in charge’ of ‘regulating’ the very derivative market (COMEX) that along with the opaque and highly leveraged LBMA gold ‘market’ majority discovers the price for physical gold bullion across the world since the middle 1970s.

Given that Presidential Candidate Michael Bloomberg and his Bloomberg LP’s financial success is much thanks in part due to the over-financialization of our US economy, I would never expect Bloomberg’s Kevin Cirilli to follow up by asking Heath Tarbert, the current Chairman of the Commodity Futures Trading Commission if the CME Group’s COMEX NYMEX Central Bank Incentive Program  is going to fall under these new CFTC speculation limits too.

Or will the CME Group just tell the CFTC that current and coming approved foreign central banks or their appointed trading desks will be exempt from these coming statues?

After all what business would a foreign central bank have in high volume discount trading COMEX NYMEX derivative contracts if not for sheer price movement reasons?

Well, let’s go to the highlights of the CFTC’s public meeting this week. I sat through 3 hours of it (damn near died hearing the inanity of all the lawyering). We’ll try and crystalize highlights in our video here.

Look to be fair.

Most of the people in that CFTC agency are well-meaning, hard-working people. We wish them the best of luck in their duties.

I’ll leave the full link to that CFTC meeting in our show notes this week if you care to hear the current 5 CFTC commissioners and various lawyers stumble over semantics regarding the largest commodity markets they have proven themselves to be incompetent in regulating as an agency just this past decade alone.

–
About one-half year ago, to hear from Dennis Kelleher, President, and CEO of Better Markets, who on June 25, 2019, sat before the U.S. Senate Committee on Agriculture, Nutrition, & Forestry in a hearing entitled, “The State of the Derivatives Market and Perspectives for CFTC Reauthorization.”

Remember the stakes here are larger than just past, present, and potentially future precious metal bullion values. Physical commodity producers and purchasers grow the food we eat, they generate the power in our homes, manufacture the vehicles we travel in, produce the fuel we need, and otherwise directly enable not just modern life, but also a rising standard of living for all US citizens and billions of people around the world.

I will leave backlinks in our Youtube video’s show notes this week, where you can track down what Better Market’s Dennis Kelleher had to say about the latest and 4th attempt by the CFTC to establish position limits in our commodity markets.

If you want to learn more about Silver, Gold, and Precious Metals be sure to pick up our free SD Bullion Guide by email right now.

Thanks for visiting us here.

Hey @Twitter: If you don’t like an article posted by @zerohedge, then why don’t you Tweet something like “We think this is bullshit” like the rest of us comrades do. Is it necessary to send them to a gulag? Say Hi to Vlad for me.

The Doc’s expertise and passion in finance, economics, and market history was developed over years of intense self-education. With his doctorate in the medical field, The Doc now seeks to help the common man restore his financial health by investing in physical gold and silver. Doc has been long gold and silver since 2001, when he entered gold at $278 and silver at $4.75. Even after seeing silver hit a 10-bagger from his initial investment in early 2011, The Doc remains a stronger silver bull than ever. He is the lead commentator on SilverDoctors.com providing insight on market breaking precious metal news.