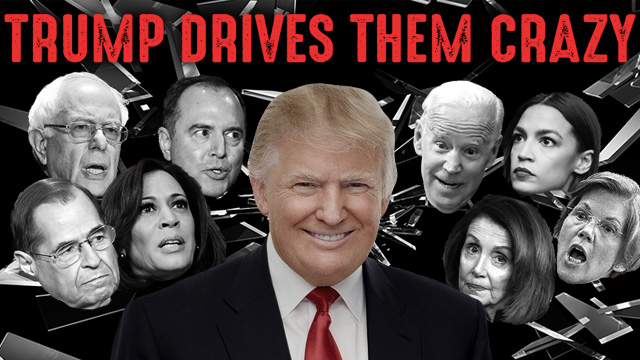 The impeachment trial of President Trump might as well be over. Not because the Senate is controlled by Republicans with the majority, but because Democrats have no case and even multiple Democrats are expected to vote to acquit, which will make Adam Schitt…..errrrrr……. Schiff and Jerry Nadler the laughingstock of the democrat party.

How bad is this whole impeachment fiasco for Democrats? Well the daily soap operas received more viewers than the trial did during the first three days of the Democrats making their case for impeachment, according to Nielsen data and reported by NewsBustersand  The Federalist. 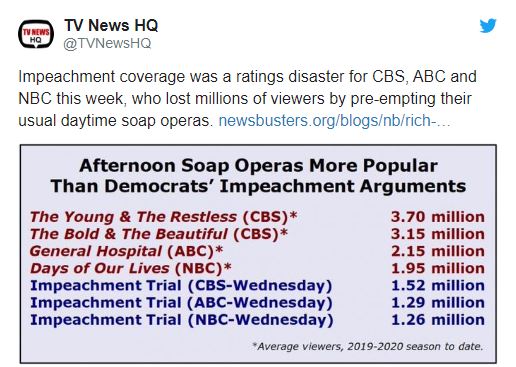 We also see Democrat operatives, such as Barack Obama’s former Chief Strategist, David Axelrod, sharing on CNN that he attended a focus group of Democrat voters at the Institute of Politics in Chicago, IL, and it was 80 minutes before anyone even mentioned impeachment, which Axelrod described as “chilling.”

While the next piece of data is not a scientific poll, but rather an “instapoll,” taken by the local DC Fox5 News channel, but with Fox recieving more viewers than other networks, it is worth mentioning. The instapoll found that by the time Democrats had finished presenting their “case” against President Trump, 63 percent of DC voters said they had watched “none”  of the trial. 22 percent said they have watched “some” of it, and 13 percent said they were “getting updates from the news.”

That was reported by the Washington Examiner on Saturday, January 25, 2020.

On Saturday, the 25th the lawyers for President Trump started their allotted 24 hours to present their case to acquit the President and as of the 26th, that same poll over at  Fox5 shows a 6 percent drop in those saying they have watched “none,” meaning 6 percent more are watching now that the Democrats are finished. Those watching “some” has also risen from 22 percent to thirty.

The point is more are watching the President’s team of lawyers than did the Democrats’ impeachment managers. 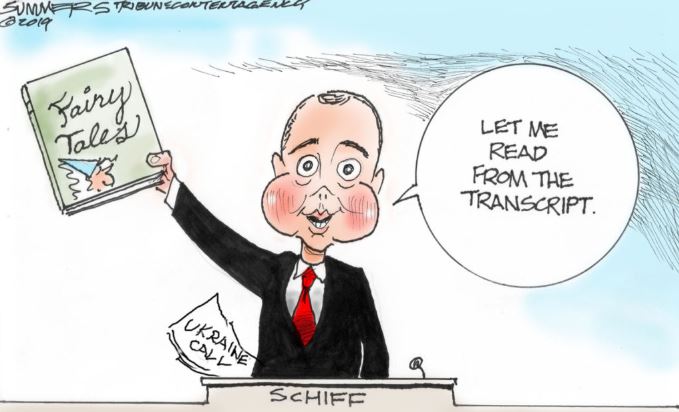 Perhaps the most telling sign of how badly the Democrats are doing is how after only day one of the president’s lawyers starting to make their case, only using 2 of their 24 hours on Saturday to save the bulk of their arguments for Monday, is how Adam Schiff is already panicking and publicly whining about how the defense if going to get the last word.