Physical gold is eternal and paper gold ephemeral. Take heed of this before the collapse of the fake gold paper market together with most paper assets.

With a paper market in gold that totally dominates gold trading and distorts the price of gold, it is easy for most people to forget what gold is all about. The history of gold is such a crucial part of understanding the importance of the yellow metal.

In the last few weeks I have had the privilege to view 3,300 year old gold from Tutankhamun’s tomb at the Saatchi Gallery in London. I have also seen 1,000 year old gold from the Cathedral in Basel. Just to remind myself where the gold price manipulation stems from, I also had a quick look at the Head-office of the BIS (Bank of International Settlement) in Basel. This is where gold intervention is official business as I discuss later in this piece.

Tutankhamun was an Egyptian pharaoh who ruled 1334-1325 BC. His tomb was discovered, nearly intact by the British archeologist Howard Carter in 1922. The tomb contained over 5,000 artefacts with many objects in gold. The two major sources of Egyptian gold at the time were found in Nubia to the South and in the Eastern desert. The Egyptian Gold was obtained by crushing the white quartz rock which was found in the desert and also panned from silt found in the river beds.

One of the most beautiful pieces found is the mask of Tutankhamun which is a solid gold death mask 0.5 meter tall and weighing over 10 kilos. It is housed in the Egyptian Museum in Cairo. 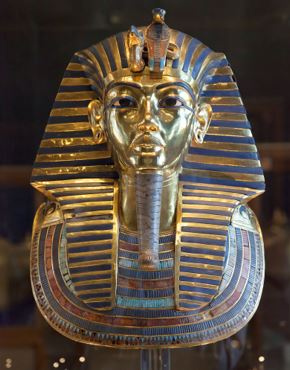 Below are some beautiful 3,300 year old pieces from the tomb in solid gold and gilded. These are currently exhibited at the Saatchi Gallery in London. 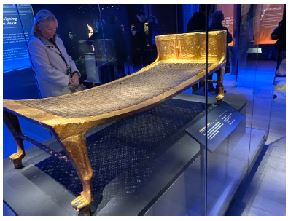 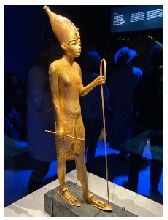 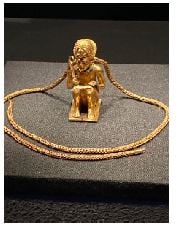 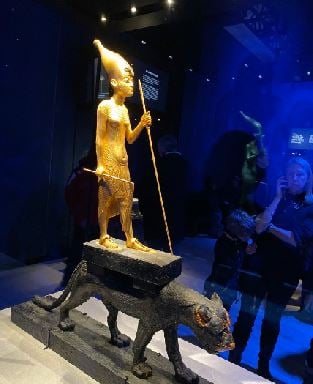 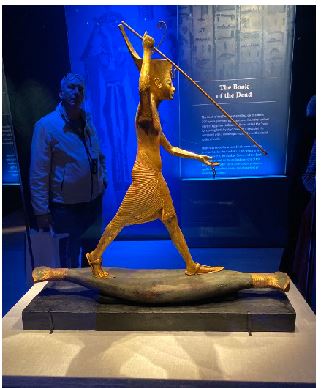 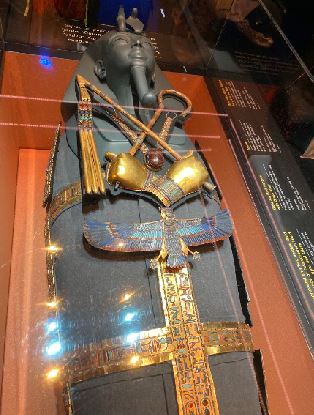 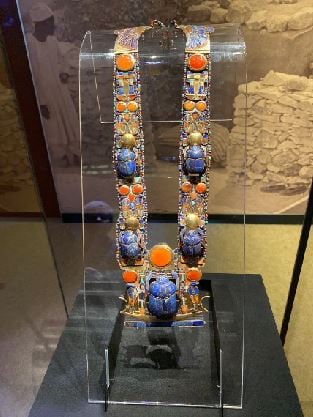 It is quite remarkable that all the gold pieces above are over 3,300 years old and in perfect condition. No other valuable material maintains its lustre like gold does. It is not difficult to understand the fascination of gold when we look at these pieces. But more importantly, it is the permanence and the rarity of gold that makes it suitable for eternal money.

If we now go 2,300 years forward from Tutankhamun in 1,300 BC to Basel around 1,000 AD we find another example of the importance of and fascination with gold.

Basel which today is Switzerland’s third largest city was at the time part of the Roman Empire under the reign of Henry II who was king of Germany, Italy and a Holy Roman Emperor. The City and Bishopric of Basel which Henry had acquired in 1006, were a bridgehead to the Kingdom of Burgundy and therefore became important to his reign.
When the Basel Cathedral was consecrated in 1019, Emperor Henry gifted the church a Golden Altar Frontal and a Golden Cross. The Altar Frontal is made of gold and oak and is 1.8 metres by 1.2 metres. For 500 years the Altar Frontal was displayed in the cathedral on all high feast days. After the reformation of 1529 it was locked up for 300 years and then sold a few times before it ended up in the Musée de Cluny in Paris. So even if this important piece lost its original function, it was never discarded or destroyed since gold is eternal wealth. 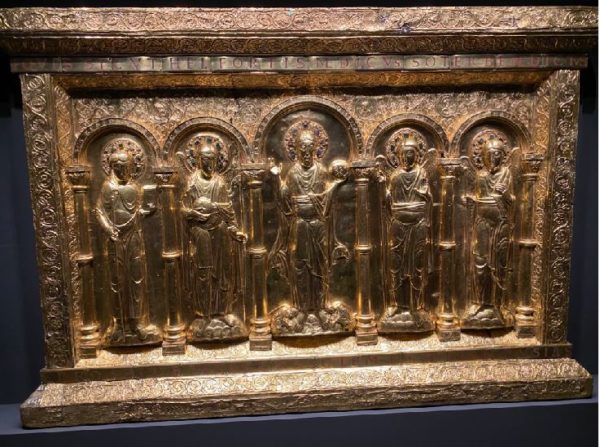 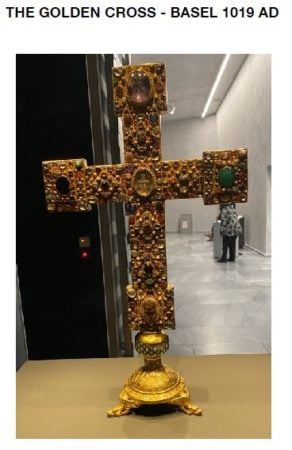 This Golden Cross or Henry’s Cross was donated to the Basel Cathedral in 1019 by Emperor Henry II. It is said to contain a splinter from the Holy Cross which made it among the most precious items one could possess in the Middle Ages.

THE TOWER OF BASEL – BIS – THE GLOBAL CENTRE FOR PAPER GOLD

Finally, when you exit the train station in Basel, you cannot miss the “Tower of Basel”. This is the head office of the BIS (Bank of international Settlement). As the picture below shows, it is a tall tower but not quite the height of the Tower of Babel which according to Genesis was meant to reach heaven. The BIS building which is the Central Bank of central banks. This is where the heads of the major central banks meet up at least 6 times per year to agree how to manipulate manage financial markets and especially gold. The gold market is one of their major areas of involvement and the BIS is actively directing gold manipulation through the bullion banks.

BASEL- FROM PHYSICAL TO PAPER GOLD IN 1,000 YEARS

So this is the sad story of the history of Basel. From an important city during the Roman Empire and a centre or commerce where most transactions were settled in physical gold, Basel has now become the main hub for directing paper gold trading.

In June 2005, William R. White of the BIS in Switzerland, said that one of the aims of central bank cooperation was to “joint efforts to influence asset prices (especially gold and foreign exchange) in circumstances where this might be thought useful.”

The BIS made a presentation to central bankers in 2008 which contained clear language of manipulation of the gold market: 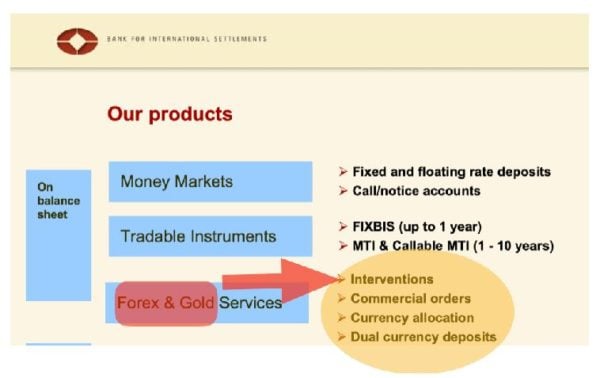 Below is a recent example of probable BIS intervention: 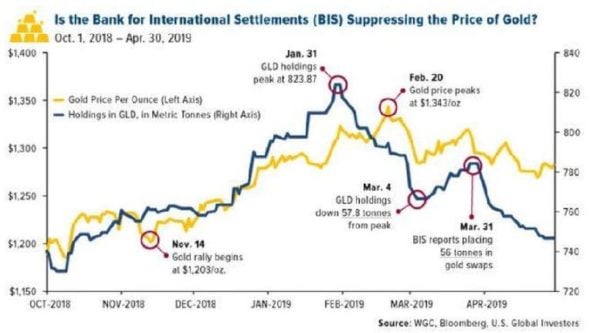 Forbes reported as follows regarding the action that the chart above shows:

“GATA’s Robert Lambourne reported on this in March of this year. As you can see in the chart below (ABOVE), gold rallied between November 2018 and February, when it peaked at around $1,343 an ounce. Ordinarily, you could expect inventory in the bullion-backed SPDR Gold Shares ETF (GLD) to continue to climb at least until then. But that’s not at all what happened. Three weeks before the price of gold peaked, the holdings in the GLD curiously began to fall, and by March 4, the ETF had lost approximately 57.8 metric tonnes. And because the GLD is the largest gold ETF in the world—its value stands at $30.2 billion, as of this week—such selling will naturally impact the price of gold. Sure enough, the yellow metal soon fell below $1,300. What gives?”

BIS – A LAW UNTO ITSELF

The BIS is a law unto itself which means that the bank and its staff is totally immune to all laws and regulations globally.

Let’s just look at some of the Articles in the BIS charter and statutes:

Article 3 above states that the BIS buildings are inviolable which means untouchable. No government representative and no police can enter the building without the permission of the BIS President or General Manager.

The paragraphs above state that no assets or deposits can be seized or frozen.

Finally, the employees of the Bank are immune from any of their actions during and after employment.

BIS AND OTHER TOP BANKERS ARE IMMUNE FROM PROSECUTION

Thus, these BIS bankers can never be prosecuted or go to jail, just as we saw with most top bankers during the 2006-9 financial crisis. So for this group, immunity clearly stretches outside the walls of the BIS.

There is no wonder why organisations like GATA’s (Gold Anti-Trust Action Committee) attempts to reveal manipulation of the gold and silver markets have been unsuccessful. It is clearly impossible to get anywhere with such an uneven playing field.

Therefore, the false markets in gold and silver will never be revealed by legal action. Instead China will be forcing the US hand. China’s gold demand since 2008 is almost 19,000 tonnes. This figure should include all Chinese gold imports as well as gold mined in China. But since the Chinese government keeps all the gold produced in China, it is questionable if their own production is really included.

The chart below shows the Silk Road demand for gold since 2005 until October 2019. The countries included are China, Russia, Turkey and India. If we extrapolate the chart to the end of 2019, the total demand is almost 36,000 tonnes. This means that around 80% of annual gold production has been absorbed by these 4 countries since 2005. So most of the gold in the world continues to travel from West to East. 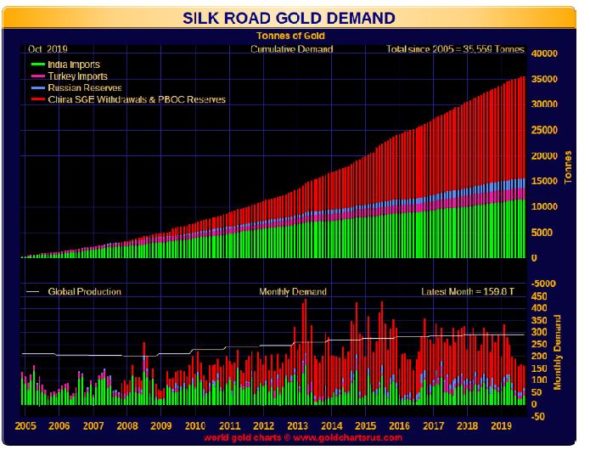 With the massive gold holding of the East, it will be difficult for the US to have any influence on the gold market as the dollar declines and China flexes its gold muscles. The US is unlikely to ever prove that they have anywhere near the 8,000 tonnes they officially declare. At some point, this will put enormous pressure on the paper gold market which is likely to implode with dire consequences for bullion banks and futures exchanges.

Stocks continue to make new highs, reacting to renewed money printing. Technically stocks are still likely to top now and could start its secular decline at any time.

There are of course different opinions without which there would be no market. The biggest online financial publisher in the world just sent out an invitation to subscribe to yet another service which predicts: “The final stage of biggest financial market explosion in US history.” In markets anything is possible short term but this seems very unlikely to me.

Gold’s correction since August 2019 is now finished and the uptrend is ready to resume. Next short term target is at least $1,700 but the old high in dollars of $1,920 should not be difficult to attain. We mustn’t forget that gold has made new highs in virtually every currency except for US dollars and Swiss francs.

Please remember what I say initially in this article:

Best protection is to own an eternal asset like physical gold.