The comment by ANP reader Roland Deschain on Wednesday on this ANP story perfectly summed up my own thoughts about ‘coronavirus’ so I’ll feature it here now to open this story.:

I told myself I was going to ignore the news about the Wuhan Coronavirus but it’s everywhere so you can’t miss it. The reports of China quarantining Wuhan City, population 10+ million are official. For reference, NYC has a population of 8.4 million. Something tells me China is downplaying the amount of those infected and the number of deaths related to it. Shutting down a city of this size over 600 sick and 9 dead doesn’t make sense.

While Wuhan’s neighbor Huanggang was also quarantined on Thursday with a 3rd Chinese city also put on lockdown as officials in China cancel many Chinese New Year celebrations with some Chinese people claiming “it feels like the end of the world”, we absolutely have to take a look within this story at the very real possibility that this coronavirus has been weaponized to do what the globalists have been unable to do through abortion or war; a mass culling, with one expert warning that this coronavirus already has the same ‘death rate’ as the Spanish flu that killed roughly 50 million people. First, from Yahoo News.

China’s deadly coronavirus may have the same death rate as Spanish flu, an expert has warned.

Deaths from the new virus rose to 17 on Wednesday with hundreds of cases now confirmed, increasing fears of widespread contagion.

The previously unknown flu-like coronavirus strain is believed to have emerged from an animal market in central Wuhan city, with cases now detected as far away as the US.

The Spanish flu pandemic of 1918 is widely regarded as “the deadliest in history”, and is believed to have infected around 500 million people worldwide, killing between 20 and 50 million.

Chinese officials have confirmed 440 cases of the new coronavirus strain – 2019-nCoV – so far, with 17 deaths.

Based on existing data, the disease is said to have a 2% death rate. This means that for every 50 people who catch the infection, one will statistically die.

ANP MAJOR UPDATE! Back in February of 2017, Nature put out this story titled “Inside the Chinese lab poised to study world’s most dangerous pathogens Maximum-security biolab is part of plan to build network of BSL-4 facilities across China”. That research lab is in Wuhan, China. Just a coincidence this is all happening now?

A laboratory in Wuhan is on the cusp of being cleared to work with the world’s most dangerous pathogens. The move is part of a plan to build between five and seven biosafety level-4 (BSL-4) labs across the Chinese mainland by 2025, and has generated much excitement, as well as some concerns.

Some scientists outside China worry about pathogens escaping, and the addition of a biological dimension to geopolitical tensions between China and other nations. But Chinese microbiologists are celebrating their entrance to the elite cadre empowered to wrestle with the world’s greatest biological threats.

“It will offer more opportunities for Chinese researchers, and our contribution on the BSL‑4-level pathogens will benefit the world,” says George Gao, director of the Chinese Academy of Sciences Key Laboratory of Pathogenic Microbiology and Immunology in Beijing. There are already two BSL-4 labs in Taiwan, but the National Bio-safety Laboratory, Wuhan, would be the first on the Chinese mainland.

With at least one case of coronavirus confirmed in America and now officials in the state of Washington confirming that patient went undiagnosed for 5 days, having contact with at least 16 people, hinting that the disease may have already spread beyond the one known case here in America, we’ve long been warned to pay very close attention to ‘ulterior motives’ when the mainstream media completely colludes on a ‘narrative’ like we’re seeing now with ‘coronavirus’, the lockdowns of huge cities and the globalists overall agenda.

So while we certainly won’t be freaking out about a new mystery disease that has so far seen only one case in the US with a still limited number of cases even in the region it was first discovered, with the mainstream media piling all over it at a time when it is being used by a totalitarian regime to lock down cities, we should at least be paying attention to it, especially considering what we’ve discovered as reported in the next section below. 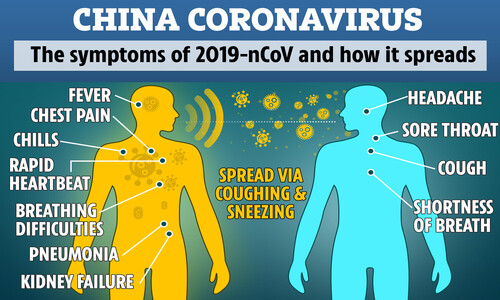 Let’s next take a look at this thread over at the Thread Reader in which you can verify for yourself that a patent for coronavirus was filed in 2015, and granted in 2018, to an Institute that is partially funded by Bill Gates and the World Health Organization. From the Thread Reader.