If a photojournalist was accused of sympathizing with the alt-right, AFP and AP would catch that in a background check or immediately release a public statement condemning them if they were informed afterwards.

But a sex offender who preyed on kids and is personally involved in extreme-left activism he is supposed to be reporting on? Hard to believe, but this is not a deal breaker for employment in news gathering at prestigious wire services tasked with framing stories copied by most major publications, including conservative ones.

A man convicted of committing a sexual offense with a 13-year-old girl is a Philadelphia-based anarchist and professional photographer, National Justice can confirm. 40-year-old Cory Vernon Clark (born Yehudah Kalman) has his work featured prominently on a number of mainstream media outlets. He is a contributing photojournalist to the Associated Press, AFP, Sipa Press and has almost 1700 pro-Antifa propaganda images on media service Getty, credited under the name Cory Clark.

Clark specializes in photographic propaganda glorifying left-wing extremists, and for the last several years has been a fixture at anarchist and communist events in Eastern Pennsylvania and Washington DC. He is one of a handful of journalists anarchist groups like Philly Antifa and Smash Racism DC allow to film them because they know he is on their side.

He was also instrumental in “doxing” people at previous National Policy Institute events going back to 2013. His high quality photographs were provided to Daryle Lamont Jenkins with the intention of identifying young men attending the conference and later harassing them. Here is an image of him outside the National Press Club in 2013 during an “Antifa” protest: 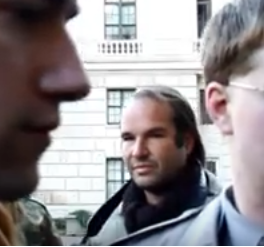 Clark’s company, Lawless Media LLC, is run jointly with his wife Dani Finger. On their website they explain that the business’ mission is to use their cameras to aid in the construction of leftist political narratives, rather than report news objectively: