Two-Week Window For Attacks Upon America Issued By DHS

Iran Sent Turkey Back To The Dark Ages In 2015

At the bottom of this story, we have embedded a Scribd document of a new terrorism advisory just issued by the Department of Homeland Security which designates the 2-week-window we’ve just entered as being a period of time when American citizens should expect ‘deadly acts’ to be carried out against us, possibly even here on US soil, by Iran or its proxies following President Donald Trump ‘taking out’ Iranian General Qassam Soleimani.

With military experts joining the DHS in warning that Iran will likely retaliate against the US at any time, with warnings that a massive cyber attack upon us might be likely because Iran specializes in cyberwarfare, back in April of 2015  the Observer published this story showing what might be ahead for America in 2020 after Iran ‘flexed its cyber-power’ by quite literally sending the nation of Turkey back to the Stone Age.

As the Observer reported, half of Turkey, 44 out of 81 provinces, and more than 40 million people, lost their power back on March 31st of 2015 for more than 12 hours with the massive outage called ‘payback’ by Iran.

That ‘payback’, a massive cyber attack that shut down the grid and practically everything including computers, airports, air traffic, traffic lights, hospitals, street lights, elevators, refrigeration, water and sewage services among the other modern day amenities that the people of Turkey no longer had access to, is one that we should all be getting prepared for here in America with a 2-week window for an expected attack wide open and running through January 18th of 2020 if not extended.

And while a 12-hour power outage doesn’t make a catastrophe, any long-term grid down scenario in the US could turn law-and-order America into a ‘Mad Max scenario’ should it last for more than a couple of days and the American people grow confused and angry as chaos begins to take hold in Americans streets where the rule of law once reigned, with any long term shutdown sure to impact the American food supply instantly.

As John C. Velisek had reported in this January 4th ANP story, with America making a strong move towards our ‘terrorist enemies’under Barack Obama and the ‘enemies of America’ clearly among us, Democrats ‘sympathy for the devil’ could lead to America’s destruction, just as the left has been pushing for anyways.

And as we’ll read in an important new SQAlert from the website of Steve Quayle that we’ve republished in the final section of our story below, Russian President Vladimir Putin recently ‘disconnecting Russia from the world wide web’ is just one of many signs before us that what has been called ‘a Revolution in military strategy’ may be used against America. A strategy that experts warn could be deployed against America ‘relatively easily’ at a time when most Americans are completely and totally dependent upon electricity for simply surviving, leading to the deaths of 90% or more of the US population in the following year to 18 months according to testimony before Congress as we’ll explore more below. 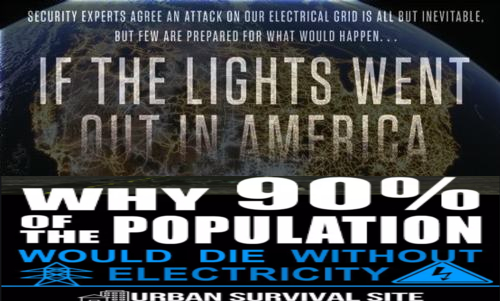 According to this new story over at the Daily Mail, Iran has just ‘upped the ante’ by threatening to attack the White House, promising a ‘crushing and powerful retaliation upon American soil’ and US military targets and as Infowars reported in this recent story, Iran also recently raised the ‘red flag of jihad’ over the dome of its holiest city, ominously symbolizing a bloody battle to come with the US.

With Iranian TV stations also broadcasting an $80 million bounty on President Trump’s head, as we had mentioned above, the most likely Iran ‘attack’ upon America in the days and weeks ahead could very well be of the ‘cyber’ nature. And while that might sound like giving America the easy way out, as Paul Bedard over at the Examiner had reported back in January of 2019, a long-term grid-down scenario caused by cyber attack or EMP could easily lead to the deaths of 90% of us or more in the following year to 18 months from disease, crime and mass starvation. From the Examiner story.

At a time when the military is starting to take the potential for an attack on the national electric grid more seriously, a newly declassified report is warning of an electronic world war launched by Russia, Iran, North Korea, and China that could wipe out North America, Europe, and Israel.

With ease and using a primitive nuclear weapon, a “New Axis” of those aggressive nations could “black out” the Western world, dismantle all electricity and electronics, end water and food supply, and lead to millions of deaths in America.

“Nine of 10 Americans are dead from starvation, disease, and societal collapse. The United States of America ceases to exist,” warned the report declassified by recently decommissioned U.S. Commission to Assess the Threat to the United States from Electromagnetic Pulse (EMP) Attack.

In “Nuclear EMP Attack Scenarios and Combined-Arms Cyber Warfare,” Pry said that the Russians have called EMP a “revolution in military affairs.”

He explained it this way to the Washington Examiner: “This new warfare uses cyber viruses, hacking, physical attacks, non-nuclear EMP weapons, and a nuclear EMP attack against electric grids and critical infrastructures. It renders modern armies, navies, and air forces obsolete. It paves the way for asymmetric warfare by small nations and terrorists.”