Decade of Living Dangerously by John Mauldin for Mauldin Economics

Welcome to the 2020s. Some weren’t sure we would make it this far, but we did. Now we face a new decade and new challenges. How we handle them will determine what kind of conversation we have in 2030.

This concern for the future is one of the things that separates humans from animals. Dogs don’t worry about tomorrow, much less next year. They live completely in the present, giving it their all (an ability I sometimes envy).

Being human, I have to think about the future. And being a writer, people want to know what I think. So today and next week I’ll outline what I expect for both the year 2020 and the decade of the 2020s. My forthcoming book will have an even more detailed vision, so consider this an appetizer.

In summary, I expect 2020 will look like a slower version of 2018 and 2019. My base case is for no recession this year, with all the usual caveats, But it’s important to know what we should pay attention to. Some key events began to unfold last year that I think will continue in 2020. Some are hard to grasp, as I said in that letter a year ago.

In a nutshell, I expect to spend this year Living Dangerously. Yes, I’m thinking of the 1982 film starring a very youthful Mel Gibson and Sigourney Weaver, based on an earlier Christopher Koch novel. It has an Asian setting and features corrupt politics, neophyte journalists, international intrigue plus a gender-bending Chinese dwarf. If you aren’t sure how all those fit together, then welcome to 2019. We are all stuck in this craziness and can only make the best of it.

Reviewing old forecasts can be humbling, but I think that mine for 2019 held up well. I outlined several risks, all of which did, in fact, pop up during the year. Fortunately, they didn’t have dire consequences… but they also aren’t over yet.

Risk, by the way, is an often-misunderstood word. It’s the possibility something bad will happen. You take risk every time you get in your car and drive somewhere. Accidents are always possible, no matter how careful you are. The fact that you didn’t crash today doesn’t mean you can throw caution to the wind tomorrow. The risk is still there.

Similarly, the fact we got through the year without Crisis X occurring doesn’t mean the risk is gone. Living dangerously tends to catch up with you.

My top concern for 2019 was a Federal Reserve policy error. The December 2018 rate hike turned out to be that cycle’s last one, though none of us knew it at the time. We saw the Fed both raising rates and shrinking its balance sheet, and markets not liking it one bit. I said they should do one or the other, not both simultaneously. I said it was going to be tough.

We are in a serious pickle. The extraordinary measures central banks took to get us out of the last crisis could make the next one even worse. They seem collectively hellbent on reducing their balance sheets. Avoiding another liquidity crisis will take some seriously active management by the FOMC and central bankers elsewhere, too. I am not confident they can do it.

That liquidity crisis I feared actually happened nine months later. The repo market seized up, causing the Fed to launch a QE-like asset purchase program that is still in progress today. As I explained last month in Prelude to Crisis, the Fed’s bad choices have compounded to the point where all the options are bad. 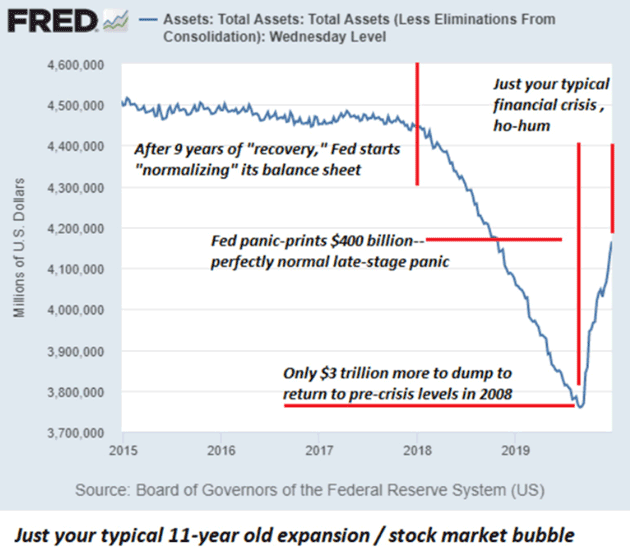 I see almost zero chance the Fed will end the repo program after the six months it presently plans, because I see zero chance the federal deficit will shrink. (Chances are high it will get even bigger.) Oh, it’s possible they pause for a short time, but then we will see another Taper Tantrum and they’ll reopen the spigots. The Fed’s QE-forever mode is helping stock and other asset prices for now. It may continue into 2020, but not forever.

Market valuations are a little bit stretched, to say the least. Last December we had a 20% correction and the CNN Greed and Fear index went to 1. A year later it was back at 97. In the meantime, the Federal Reserve reversed its balance sheet reductions, cut interest rates and generally accommodated the market’s and Trump’s desires.

If we get anything like the correction we saw a year ago, I think the Fed will respond with another interest rate cut or two, while continuing the current QE and maybe even increasing it. As Milton Friedman famously said, “Nothing is so permanent as a temporary government program.”

Another potential 2019 crisis, avoided so far but still with us, lies in the corporate bond market, especially its high-yield segment. Companies continued levering up last year and yield-hungry investors helped them do it. That might be less worrisome if they were using this borrowed money to make capital investments or otherwise generate additional value. Instead, much of it goes to buybacks that prop up share prices but don’t make the company any more valuable. It shifts the capital structure away from equity in favor of debt. It mainly helps option-holding management at the expense of shareholders. 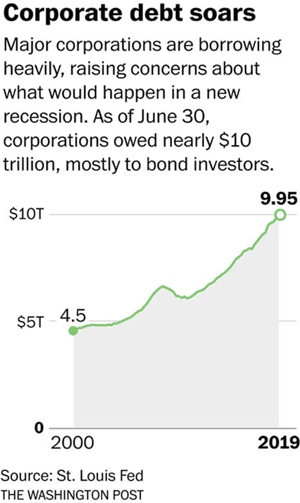 Yet another problem is this debt tends to be short-term and has to be constantly rolled over. This is the same challenge the federal government faces. Congress and the Trump administration are spending more money, forcing the Treasury to sell more paper. This rising demand for liquidity is one factor behind the repo crisis, to which the Fed is responding with QE (or whatever you call it).