Twitter blamed a computer glitch after President Trump’s retweet of a post containing the name alleged whistleblower Eric Ciaramella mysteriously disappeared from his timeline. After ‘fixing’ the issue and restoring the retweet, the user was simply banned from the platform so that nobody could see the tweet, which quickly went viral.

“Rep. Ratliffe suggested Monday that the “whistleblower” Eric Ciaramella committed perjury by making false statements in his written forms filed with the ICIG and that Adam Schiff is hiding evidence of Ciaramella’s crimes to protect him from criminal investigations,” read the tweet made by by now-banned @surfermom77, which describes herself as living in California and a “100% Trump supporter.” 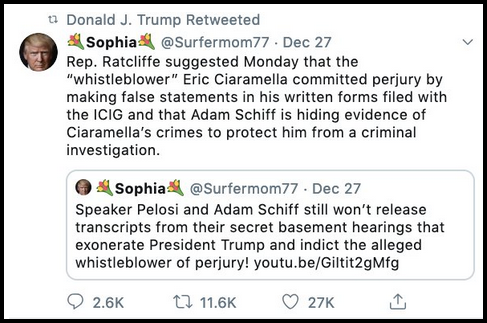 Ciaramella has been outed in several outlets as the ‘anonymous’ CIA official whose whistleblower complaint over a July 25 phone call between Trump and with his Ukrainian counterpart is at the heart of Congressional impeachment proceedings.

Trump retweeted the post around midnight Friday. By Saturday morning, it was no longer visible in his Twitter feed.

When contacted by The Guardian‘s Lois Beckett for explanation, Twitter blamed an “outage with one of our systems.”

By Sunday morning, the tweet had been restored to Trump’s timeline – however hours later the user, @Surfermom77, was banned from the platform.

Running cover for Twitter is the Washington Post, which claims “The account shows some indications of automation, including an unusually high amount of activity and profile pictures featuring stock images from the internet.”