Having learned absolutely nothing from their utter humiliation after the MSM led an internet mob to attack teenage Covington Catholic students using a deceptively edited video clip, resulting in multiple multi-million dollar lawsuits against major news organizations like Washington Post and CNN, once again liberal media’s own bias and knee-jerk reactions caused them try to destroy three young West Point cadets for what ended up being no more than a game.

Apparently this latest bit of idiocy on the part of the establishment media began after a random Twitter user, with a little over 400 followers, tweeted “Just wanted to enjoy the #ArmyNavy. Didn’t expect or want to see the White Power symbol thrown up by cadets on national television.” Along with that statement were images, shown below. 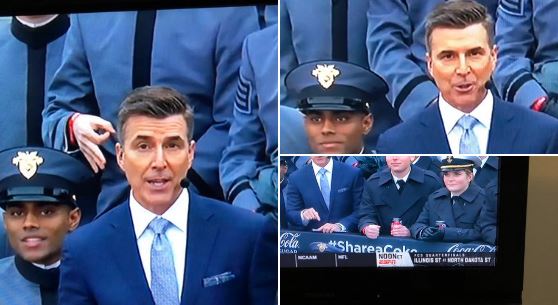 The liberal establishment media caught wind of that tweet and off they went with social media posts, and entire articles about how those West Point students were white supremacists, with many verified Twitter users attacking those students, all over the “Okay sign,” which is also used in an old game called the “Circle Game,” or “Gotcha Game.”

Completely innocent, all in fun, yet the media made such a huge deal out of it that the  Department of Army initiated an full-fledged investigation into “hand gestures on ESPN GameDay.”

The investigation concluded that the students held no “racist or white supremacist views,” and the hand gesture was, in fact, part of a well-known game.

On Page #1, Item #3 “FACTS,” the report on the investigative findings made it very clear that the “event and hand gestures drew intense social media attention and coverage from several media outlets, who carried both text and video stories discussing a similar ‘OK’ symbol being sometimes associated with white supremacists and/or white power movements and ideology.”

This is yet another example of liberals and the establishment media talking out of their butts, “reporting” on something when they do not have a clue as to what is really going on, then sticking to their false narrative aka “Fake News” even after being informed of the truth.

When people that argued from day one that the cadets were not flashing a “white power” sign, highlighted the investigation and the findings and asked when the media apologies would start, the reactions were either silence or blaming ,  President Trump… I kid you not, one Boston Sun columnist actually claimed his jumping to conclusions because of his Trump Derangement Syndrome was because of who is “still living in the White House.” 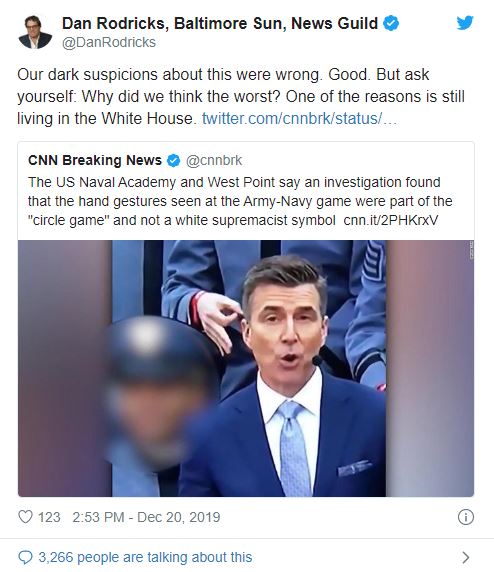 As can be seen in the screen shot above,  123 people “liked” his response, but over 3,000 are commenting, most of which calling him out for his moronic response. That is called being ratio’d and Twitchy captured some of the best comments to him.

It is not often that ANP readers will see me offering kudos to anyone that works at CNN, but credit must be given when it is due, so kudos goes out to CNN law enforcement analyst James A. Gagliano, who offered up and heartfelt apology without attempting to make excuses for himself, stating “Owe cadets in question apology for my knee-jerk reaction, questioning their actions before Academy’s investigation & fair hearing of the facts. Guilty of serving as Twitter judge w/my *hot take*, immediately presupposing something nefarious. I was wrong.”

MEDIA HELPS 4CHAN TO CONTROL THE NARRTIVE AND CO-OPT SYMBOLS

So, how did something as innocent as the “Okay” sign, which most of us grew up using meaning things were alright, OK, good, etc….. suddenly become taboo, a sign of white supremacy in the eyes of the media, ADL and liberals?