Last year, a local guy started renovating a restaurant on Main Street that has been shuttered for at least fifteen years. He’d retired from the army and started a company that made a fortune clearing landmines in faraway lands where US nation-building plans went awry. Wasn’t that a ripe business opportunity! He’s from here and loves the village and married his high school sweetheart — and would like the place to come back to life.

He’s partnered up with another guy who intends to open a bistro with a bar, a fireplace, and supposedly a boutique distillery operation in the back. That would give some people in town a reason to leave the house at 5 o’clock in the afternoon, when the day’s work is done — people like me who work alone all day. It could also give the citizens of this community a comfortable place to talk to each other about their lives and the place where we all live, and what we might do about things here. That’s called local politics. 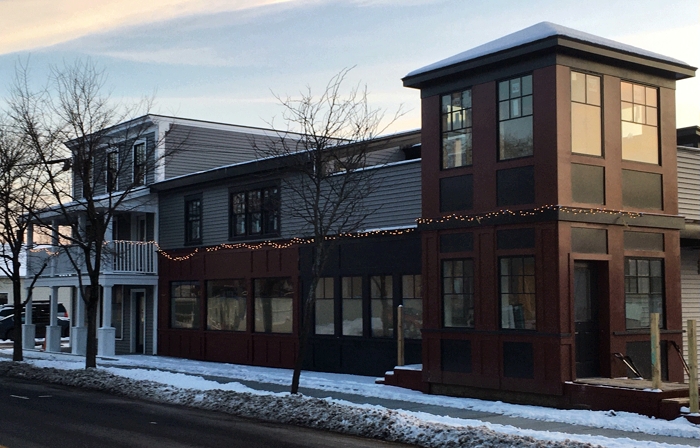 I’ll refrain from tossing off judgments about the exterior treatment for now. Draw your own conclusions. I haven’t seen the inside and there’s butcher paper taped up on the windows while they finish in there. It looks like they’ll open early in the new year. There hasn’t been a comfortable public gathering place on Main Street in a long time. There’s a “tasting room” at a local small brewery down the block, but it’s hardly bigger than a couple of broom-closets and the New York Liquor Authority has an asinine regulation that literally forbids comfortable seating in such a designated establishment. Stools only. And only a few of those. What kind of culture does that to itself?

Ours apparently. When you get down to it, the sickness at the heart of our nation these days is the result of countless bad choices, large and small, that we’ve made collectively over decades, including the ones made by our elected officialdom. The good news is that we could potentially move in the opposite direction and start making better choices. However deficient and unappetizing you think Mr. Trump is, and how crudely unorthodox his behavior, that equation is what got enough people to vote for him. The strenuous efforts to antagonize him, disable him, and get rid of him by any means necessary — including police-state tactics, bad faith inquisitions, and outright sedition — have prevented the nation as a whole from entertaining a realistic new consensus for making better choices. In fact, it has achieved just the opposite: a near civil war, edition 2.0.

All the people of America, including the flyovers, are responsible for the sad situation we’re in: this failure to reestablish a common culture of values most people can subscribe to and use it to rebuild our towns into places worth caring about. Main Street, as it has come to be, is the physical manifestation of that failure. The businesses that used to occupy the storefronts are gone, except for second-hand stores. Nobody in 1952 would have believed this could happen. And yet, there it is: the desolation is stark and heartbreaking. Even George Bailey’s “nightmare” scene in It’s a Wonderful Life depicts the supposedly evil Pottersville as a very lively place, only programmed for old-fashioned wickedness: gin mills and streetwalkers. Watch the movie and see for yourself. Pottersville is way more appealing than 99 percent of America’s small towns today, dead as they are.