(A special thanks to Maria Kneas for this story. Her book “Prepare For Persecution” can be found here.)

For years, various forms of occultism have been promoted by Hollywood, the popular music industry, video games, comic books, and magazines for children. Now the promotion of occultism and paganism has increased to the point that even Satanism and cannibalism are being openly promoted.

When it comes to overt evil and blasphemy, Satanism is the ultimate. In spite of that, in America, they are a tax-exempt religion that is recognized by the state.

A friend of mine who served in the Air Force had a commanding officer who was openly a Satanist. My friend told me that Satanists are attracted to the military because Satanism is a protected religion there. In addition, Satanists can rise in the ranks and get power over other people, and they like to have power.

Sadly, Satanism has become so mainstream that now there are books available for introducing young children to devil worship and conjuring up demons. For example, “A Children’s Book of Demons” is recommended for children as young as five. It tries to make summoning demons sound like a kid-friendly activity by saying, “summoning demons has never been so much fun.” This book is easy to obtain because it’s being sold by Amazon and Walmart.

Some Satanists are trying to change their image. For example, a Satanist “church” in Oklahoma City rented out the civic center to do a “blasphemy ritual” that was open to the public. This particular ritual was described as being a “parody of the Catholic rite of exorcism.”The purpose of the ritual was to cast out God. In other words, they openly hate God and they want to get rid of Him. This event was advertised, and the group was interviewed by ABC News. The Satanic “church” sold tickets to the event.

This Satanist group claims to be benign, and to have replaced devil worship with “a religion where God doesn’t exist but rituals are used to empower the believer.” Their leader said, “We don’t kill animals, we don’t kill children.”

If God doesn’t exist, then why would they do an “exorcism” to try to cast Him out? They don’t want Him to exist. But He does. And at some level they must know it.

Another attempt to mainstream Satanism was to have a Black Mass at Harvard University. The local Catholics protested so much that the ritual was held off campus instead of being done at Harvard. So they held it nearby instead of at Harvard itself.

Reuters called this a “parody” of the Catholic Mass. That term is misleading. This is not just mocking Catholicism. It is a serious attempt to blaspheme God. The Satanists desecrate bread that has been consecrated by a priest. This can be accomplished in two ways. The most common is to steal consecrated hosts from a Catholic Church. But the preferred way is to have an ordained Catholic or Orthodox priest who is also a Satanist.

Does this sound impossible? Not really, because people can change. For example, according to Pastor Richard Wurmbrandt, Karl Marx started out as a devout Russian Orthodox and wound up being a Satanist. You can read about this in Wurmbrandt’s books “Was Karl Marx A Satanist?” and “Marx & Satan”.

Catholics believe that Jesus Christ is literally present in the consecrated bread and wine. Satanists also believe this, which is why they desecrate the bread and wine. They are trying to hurt and humiliate the Lord Jesus Christ. Protestants don’t believe that doctrine. Therefore, they don’t believe that Jesus Christ can be harmed by Satanists, or that He needs to be protected from them by men who are loyal to Him. That issue is beyond the scope of this article. My point is to show the intention of the Satanists. The Black Mass is a way of unleashing their hatred for God, and trying to cause Him as much suffering as possible. 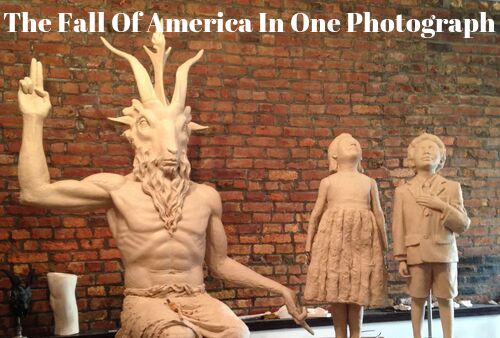 There is another significant attempt to mainstream Satanism. The Satanic Temple from New York succeeded in forcing the state of Oklahoma to allow them to put a Satanic statue in Oklahoma’s State Capitol. This statue is seven feet tall, so that group must have a lot of money.

Some of the height of the statue comes from a throne that the devil is sitting on. The back part of the throne features a huge pentagram that is above the devil’s head. The devil has big horns, but because they are in front of the throne, they don’t stand out. Because of the throne, you don’t see the shape of horns sticking up in the air by themselves.

This statue tries to make the devil look benign. He has a goat’s head with horns, but his face isn’t nasty. They have softened it. He is sitting on a throne that has a large pentagram, but the pentagram isn’t part of him. His bat’s wings looks softer than demonic pictures normally do. He is modest, as his body is covered by draped cloth.

There is a little girl on one side of him, and a little boy on the other side of him. The boy seems to be smiling. The devil’s lap is about waist high for the sculptured children, so real live children would be able to climb up into his lap and sit there.

The article about this mentions that this is a portrayal of Satan as Baphomet. However, it fails to mention that this is very different from the usual statues or drawing of Baphomet that are intended for the use of fellow occultists. That one is is naked, with the large breasts of a woman. He has a thick pentagram on his forehead. His face is so evil that I wish I had never seen a picture of it. And he has a large phallus sticking up, with two snakes twined around it.

You can find pictures of Baphomet by searching for his name online. However, if you are a visual person, then I don’t recommend doing it because it’s better not to have seriously evil images get into our heads. Personally I wish that I had never seen this thing because its face is so evil.

The statue that they are trying to put in Oklahoma is an attempt to make something horribly evil appear to be harmless. And to make it appealing to children. One article about this said that the statue is intended to be “interactive with children.”

Earlier I mentioned the Satanic group that rented out the civic center in Oklahoma City. The group’s leader said that they don’t kill animals or children. Well, maybe that group doesn’t. (But he could have been lying about that.) Whether or not he was telling the truth, there definitely are Satanic groups who kill children and animals.

I have another Christian friend who is a psychiatric nurse. She has worked with many patients who were victims of Satanic ritual abuse. Many of them were raped. Some of them were forced to watch people be murdered as blood sacrifices to the devil. And some were also forced to drink the blood of those victims.