The Gay Mafia Is Coming After Your Children

LGBT Agenda: ‘Grooming Of The Next Generation’ – From Drag Queens To Sprite Commercials

In May 2018, Gallup found that the “percentage of American adults identifying as lesbian, gay, bisexual or transgender (LGBT) increased to 4.5% in 2017, up from 4.1% in 2016,” which was confirmed in March 2019 by the Williams Institute at the UCLA School of Law, which specializes in LGBT research.

We start with the statistics because it is important to know them to understand exactly how over-represented the LGBT community is in Hollywood, where you can barely find a movie or show that doesn’t have someone identifying as a  lesbian, gay, bisexual or transgender in it.

We see TV commercials which are targeting children, and already confused teenagers, in an attempt to normalize a lifestyle practiced by less than 5 percent of the U.S. population.

Schools are implementing entirely new policies that sacrifice the privacy and rights of “straight” heterosexual children and teens in order to cater to the LGBT agenda.

Let us not forget that now Mattel is releasing “gender-neutral” Barbie Dolls.

Last but definitely not least, Drag Queens have decided to make a complete mockery of Christmas with their “A Drag Queen Christmas,” which they fully admit has adult content, yet “all ages” are welcome. 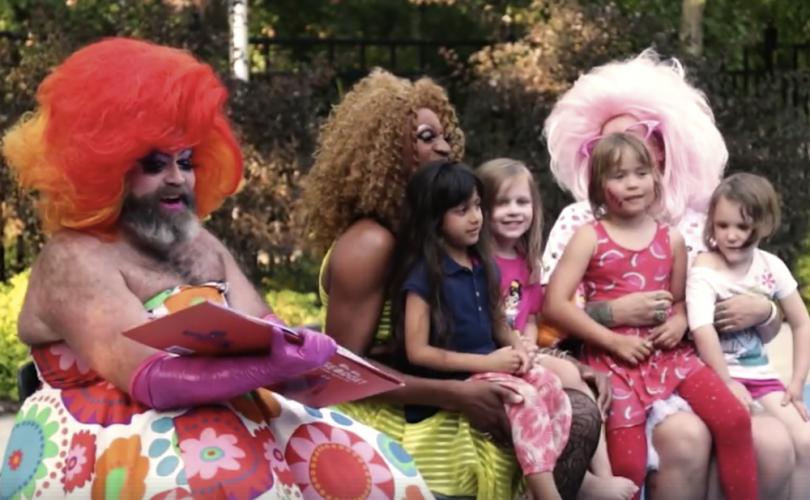 DRAG QUEEN ADMITS AGENDA OF ‘GROOMING THE NEXT GENERATION’

The video below was linked to by Fellowship Of The Minds in their article about the Drag Queen Christmas show, where a man who identifies as a drag queen is attempting to make a case for Drag Queen Story hours, where men dressed as women with over-done makeup read to children in schools and libraries across the U.S.

In his little speech as to why he feels degraded by those that do not think grown men dressed as women should be reading to children, he claims he has no “agenda,” yet then fully admits the purpose is to “groom” the next generation of children into believing that being a drag queen is totally normal.

Drag Queens have been part of Las Vegas adult entertainment shows as long as I can remember, and no one had a problem with them. People had a choice, pay to see the show or don’t. Children do not have that choice and adults around the country are speaking out about having grown men, dressed as women, interacting with children with the sole purpose of normalizing a lifestyle and/or LGBT agenda that is practiced by less than 5 percent of the U.S. population.

Tags: Agenda 21agents of the enemyhomosexuals