‘Islam doesn’t seek a ‘balance point’, it dominates and annihilates the indigenous culture over time’

‘Islam doesn’t seek a ‘balance point’, it dominates and annihilates the indigenous culture over time’ By Stefan Stanford – All News Pipeline

This One Chart Shows Why Christianity, Freedom & America Are In Peril: The ‘Law Of Islamic Saturation’ Has Enabled ‘The Most Totalitarian Political System In History’ To Thrive In America 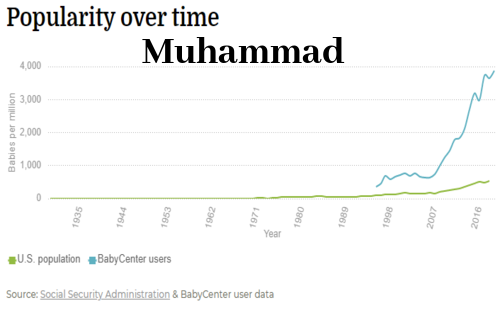 The story by Dean Garrison over at DC Dirty Laundry titled “Don’t Believe in the Planned Islamic Takeover of America? Muhammad makes list of top 10 baby names in the U.S. for first time”, which both Whatfinger News and the Liberty Daily had linked to on Thursday, was impossible to access for part of the day with DC Dirty Laundry’s website down, most likely DDOS’d offline for covering ‘inconvenient truth’.

While their story began, “If you don’t believe people like myself who constantly talk about how Muslims are not here to assimilate, but rather dominate, maybe you will start to take our argument a little more seriously in time“, it quickly transitioned to this new SFGate story detailing the parenting website BabyCenter and their list of the top 100 names in America for boys and girls in 2019.

And while America is thankfully still a free country and people are quite free to choose what they’ll name their children, and we’ve seen some ‘wild‘ names over the past several decades from ‘Diva Muffin‘ to ‘Dweezil‘ to ‘Moon Unit‘ Zappa, the trend we’re witnessing now that DC Dirty Laundry points out does not bode well for freedom or liberty in America with censorship, the mass and systematic abuse and oppression of women, slavery, ‘honor killings‘, beheadings, the mass murders of ‘disbelievers’ and the total destruction of human rights following ‘the political philosophy of Islam’ wherever it goes.

With the name ‘Muhammad‘ making the top 10 list of names for baby boys in America for the first time ever as seen in the chart from BabyCenter at the top of this story, while in Europe, people are jailed for merely criticizing Islam, we’re being shown the way America will likely go if the far-leftists have their way in 2020. So we’ll explore within this ANP story the main point argued in this November 25th Life Site story titled “How Islam Plans To Conquer The West Without Using Weapons” but first, from this DC Dirty Laundry story.

Almost all of last year’s top-10 darlings are still favorites this year, with a few exceptions.

Revealing a rise in Arabic names, Muhammad and Aaliyah made the top 10 for the first time, replacing Mason and Layla. Muhammad is considered the most popular name in the world, and UK news site Independent says it is “given to an estimated 150 million men and boys.” “

Muhammad’s been rising on BabyCenter top baby name lists around the world, so we knew it would soon break into the U.S. top 10,” Linda Murray, BabyCenter’s global editor in chief, said in a press statement.

“Muslim families often choose Muhammad for firstborn sons to honor the prophet and bring blessings to the child. The name also has multiple spellings, and that helps a name get into the top 10.”

And while we’re sure that some might call us ‘Islamo-phobic’ for writing and publishing this story, as the website Bare Naked Islam pointed out in this November 22nd story, being suspicious of the totalitarian political philosophy of Islam isn’t a ‘phobia’ at all, it’s a survival tactic! While people are certainly still free to choose their own religion in America, the deliberate attempt to impose a totalitarian political system such as Islam upon a free people absolutely MUST be met with resistance. As we’ll see in the next section below, ‘Political Islam’ has been subjugating civilizations for over 1,400 years and ‘America’ is their next target with most of Europe having already fallen.

Before we go any further, let’s take an extended look at this story over at the website ‘Political Islam’ which reports that ‘Political Islam has subjugated civilizations for 1,400 years’, a story detailing for us this totalitarian political philosophy that is absolutely necessary to understand to see what Americans are now up against. While the left will argue that Islam is just ‘a religion’, ‘Islam’ really is a completely totalitarian political philosophy that is NOT compatible with freedom!

All of the doctrine of Islam is found in three books—the Koran, Sira and Hadith, the Islamic Trilogy. If you read the Trilogy, something remarkable becomes obvious, you find that most of the doctrine is not about how to be a Muslim, but refers to the non-Muslim. The Arabic word for the non-Muslim is Kafir, sometimes translated as infidel or unbeliever.

In Islamic doctrine there is nothing positive about the Kafir. Allah hates Kafirs and plots against them. Muslims claim that Christians and Jews are accepted under Islam and are called people of the book. But the doctrine goes further and states that the only “real” Christians are those who accept Mohammed as the final prophet, agree that the Gospels are in error, and reject the divine nature of Jesus. The real Jews are those who accept Mohammed as the final prophet and consider the Torah corrupt. If a Christian or Jew does not accept this, then they are Kafirs. Pagans, polytheists, agnostics, atheists, and all others are Kafirs as well. It is important to note that Islam claims to be the final judge of all religions. This is part of its totalitarian nature.