QEnifity: $3 TRILLION In Two Months – “Best Economy In History” by Rory for The Daily Coin

The Fed should lower rates (there is almost no inflation) and loosen, making us competitive with other nations, and manufacturing will SOAR! Dollar is very strong relative to others.

Manufacturers are being held back by the strong Dollar, which is being propped up by the ridiculous policies of the Federal Reserve – Which has called interest rates and quantitative tightening wrong from the first days of Jay Powell!

The two tweets above hit the airwaves on December 2, 2019. This was announced, by President Trump, on the same day as the Wall St Journal announced the following

The New York Fed has now pumped nearly $3 trillion into unnamed trading houses on Wall Street in just over two months to ease a liquidity crisis that has yet to be credibly explained. Source

Overnight on December 2, 2019 alone the Federal Reserve Bank of New York pumped billions upon billions into the system – all of which is completely unexplained to anyone.

The Federal Reserve Bank of New York continues to pump massive liquidity amid very heavy demand by banks for year-end funding; the $97.9 billion involved overnight repurchase agreements, or repos, worth $72.9 billion and the balance via 42-day repos. Source

Is it just me or does this scream the system is breaking down at a very, very rapid rate? This would be the exact opposite of the “best economy in history”, in fact, this is as bad, if not worse, than what happened in 2008, when the Federal Reserve handed out somewhere between $16 and $23 TRILLION during the global economic meltdown. 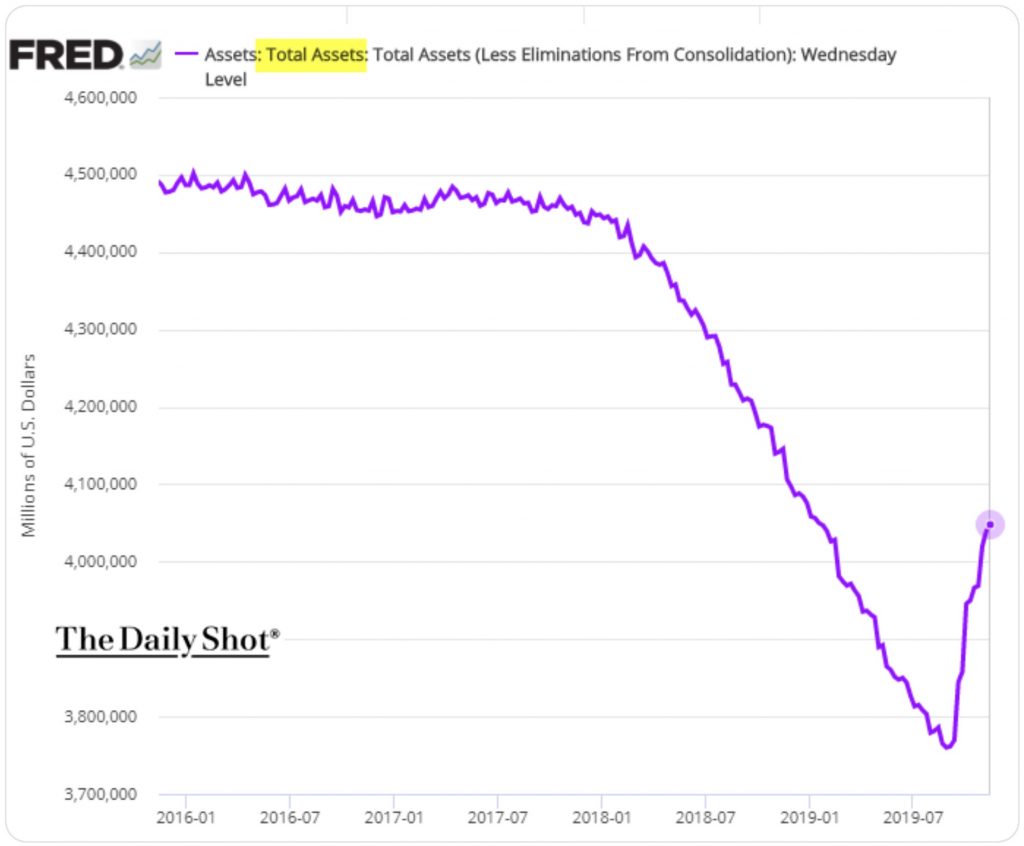 What we are seeing right now is going to surpass the numbers from a decade ago.

First, Obama claimed the economy was in “recovery” but the economy never actually grew. Now President Trump is claiming it’s the best economy ever and while we are seeing some growth, we are beginning to see the rot come to the surface. It can no longer be swept under the carpet and papered over as has been happening for the past decade. The numbers are too big, the rot too deep and the systemic problems too far reaching.

The corporate media, as much as they hate President Trump, have played along with this charade. The system is now broken and the only remaining question is how much more can be stolen? How much longer will Russia, China and India deal with this system of theft before they pull the plug and shift completely into the CIPS and MIRS systems of global payment messaging systems?  At this point it seems as if everything is in place for these nations to make the switch and leave the SWIFT system and the dollar based global trade system behind.

The dollar based system no longer benefits anyone except for those at the very top of the ponzi scheme, those within the global banking systems of JPMorgan, Goldman Sachs, HSBC, IMF, BIS, World Bank and a handful of other banks around the world. Literally, everyone else is merely a slave to these mafia organizations and the theft goes on and on unquestioned and unimpeded.