Lockdown by Michael Ballanger for The AU Report

“Gold is money; everything else is credit.” —J.P. Morgan

My first faithful dog Fido (circa 1963) and I used to play a game years ago before his eyes and hips started to go a tad “wonky,” and in that respect, we were and are quite similar. They say that dogs tend take on the appearance of their owners (or vice versa), so I guess that goes for the aging process as well. Anyway, we used to live in a neighborhood in the GTA that was once considered “working class:” That is to say, the wartime houses all looked the same (dull); were quite modest (small); and all were affordable (cheap).

However, the yards were actually disproportionate to the dwellings because my dad could flood a near-regulation-size hockey rink as long as the cops didn’t see him open up the local fire hydrant with that god-awful wrench the size of a baseball bat. In the winter, even on school nights, kids from around the neighborhood would be in the Stanley Cup finals until well after bedtime, as Dad strung up the ugliest set of lights in history to illuminate the playing surface.

As the winter wore on, the snow shoveled from the ice became the boards and after a number of mild spells where melting and refreezing occurred, those boards were the most unforgiving boards in hockey history. The nets were all made from 2x4s and fencing mesh so taut that if you really leaned into a shot, chances are it was coming right back at you twice as lethal as it was when it left your stick.

It was a mixed neighborhood with plenty of ethnic prejudice; being in an aircraft manufacturing town, it was filled with those awful immigrants from England and Ireland and Scotland that thought they actually belonged in Canada. As the legacy of the British Isles was carried across the Atlantic Ocean, the English looked down upon the Scots; the Scots and English looked down upon the Irish, and nobody but nobody tampered with anyone from Dublin. I know it wasn’t right but that was just the way it was—until you got on the ice, that is. Once on the ice, ethnicity disappeared and new battle lines were drawn and suddenly everyone wanted young Paddy from Dublin on their team and were willing to pay up. Suddenly and without reason, young Paddy was eating at your dinner table and was officially your “mate” (although Mother wondered for years after how any ten-year old boy could eat that many potatoes in one sitting).

Now, there was one kid named Harley who didn’t play hockey and as we all thought he was a little “strange” we tended to steer clear of him. Much larger than any of us, Harley took a different bus to school each morning and as we used to watch him duck to enter into the door of the bus, we would shudder to think of what would happen to us if he ever got mad (given that he probably was “mad”). One day, coming home from school, I came across an enormous black lunchbox lying unopened on the side of the road, and being of a curious nature (“nosy”), I opened it up and found a triple-decker peanut butter, jam and banana (!) sandwich staring up at me from under the Saran wrap that protected its infinite freshness. Now, peanut butter was good and a triple decker was better and a triple-decker peanut butter and jam was sublime, but throw in ripened banana slices and whoosh! Heaven. As Fido and I sat there devouring this tiny sliver of paradise (Fido kept smacking his canine lips to keep his mouth from sticking shut), around the corner appeared the visage of a large human being moving (stomping) toward us, apparently in ill humor. As he approached, a feeling of impending dread began to fill my psyche. When I finally realized who it was, I noticed a name, Harley, on the underside of the lunch box. which sent me scrambling to rewrap the half-eaten sandwich and stuff it under the apple and Mickey Mouse napkin.

Just as this leviathan of a boy reached down to grab me, the most remarkable thing occurred. Fido, having finally freed the peanut butter from the roof of his mouth, let out the most ungodly of growls and leapt in the air, his front paws landing squarely on Harley’s chest and, as if propelled by prehistoric instinct, fired poor Harley straight onto his back. Fearing for our lives the repercussions of assaulting this Neanderthal of a human, I ordered Fido to “Come!” Poised for flight, I watched in wonderment as each time Harley tried to get back on his feet, Fido would thump him back down. He never bit the kid but he never let him up either, and only when some adults came by and began to referee the altercation did Fido let up and trot back home with me, tongue wagging and supremely happy to have his teeth free from that hideous peanut butter. From that point on in my life, I called the Fido move “lockdown.” Fido the Wonder Dog was the master of “lockdown!”

What brought that little anecdote to mind was the recent action in the financial markets where the S&P 500 continues to shrug off weakening macro data, global trade and rising yields only to focus on a handful of momo stocks that are dominating the averages. Likewise, precious metals are bogged down in a range where rallies are constantly sold but also, due largely to physical demand, dips are being bought, particularly in silver.

The one word that comes to mind is, once again, “lockdown,” as it matters not the content of the headline event, with stock markets being at all-time highs; with gold and silver short positions now comfortably profitable coming off the early September highs; with year-end bonuses for the bullion bank traders firmly in the crosshairs. As we all have seen before, there is nothing more compelling than a seven-figure bonus at Hanukkah (or Christmas). Markets are in full lockdown and I find it hilarious to listen to CNBC as all of their “guest commentators” explain with great seriousness their “outlooks” and all of the minutia needed to explain why investors are choosing to ignore $80–100 billion a day (!) of REPO actions absolutely engorging the member banks with cash all for reasons about which we are supposed to “not worry.” 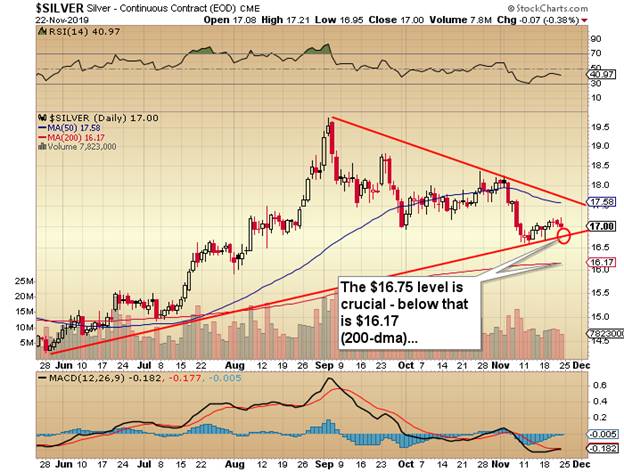 That said, the December silver contract is struggling within a downtrending triangle and absolutely must hold $16.75, the failure of which runs the risk of a quick plunge to the 200-dma (daily moving average) at $16.17. While I remain bullish, the upcoming week is going to be critical for near-term traders as we rapidly approach the First Notice Day, where gold open interest is coming down from its highest level in history. While silver is nowhere near as high, it is still in veritable lockdown unless it cracks $16.75.

Now, using Crimex #3 “Rule of Deception,” a breakdown of the $16.75 trendline could be the tape-painting exercise orchestrated by the bullion bank thieves to spook the funds and the amateur technicians into a high-volume dump, giving JPMorgan and brethren the opportunity to cover, after which they take it right back up. We shall see.

Shifting gears to stocks for a moment, I have been asked why, with the TVIX now down to under $7, I am not taking on a position. The reason is that I have become so disgusted with these constant interventions (PPT/REPO/tweets) that I feel like the mark in the rigged poker game. Anyone who can read and write can see how blatantly tilted the board has become. But I did pull up the TVIX chart and it actually looks like a very low-risk, high reward set-up. It’s a “buy.”