The recent sell-off in gold has triggered massive gold demand from India. Recall that India had been dormant since June, when the Government increased the import duty by 25% on imported kilo bars. But the lower price of world gold, combined with India’s peak seasonal gold buying period has unleashed India’s gold importation beast.

Based on premiums being paid for gold after taking into account the import duty (this is data I receive daily from a high-priced subscription service we get for my fund), Indian importation is running full-tilt. For illustrative purposes, using $1455 as a base price, inclusive of the import duty plus the ex-duty price premium, Indians are paying the equivalent of $1644/oz for gold right now. This demand for physical gold is likely responsible for preventing a much deeper sell-off in the price of gold.

Despite repeated attempts to take the price of gold lower, Indian physical demand has put a floor under the market, at least for now, and poses a potential threat to the record level of net short interest in Comex futures by the banks and hedgers: 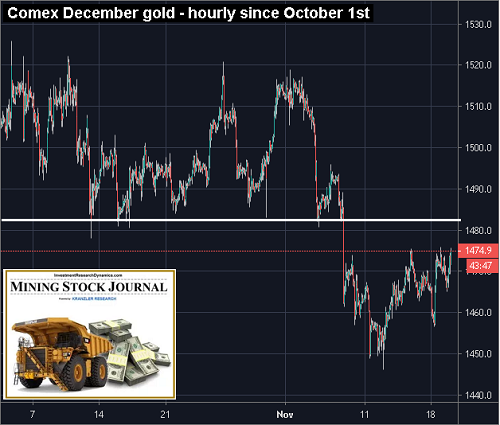 Technically I would like to see gold push up and through the low $1480 area. And the Federal Reserve may be providing the fuel for this to occur. In addition to restarting its money printing press with the high volume switch, on Tuesday the NY Fed’s John Williams advocated a policy of cutting rates aggressively to “pre-empt” the recession that’s already engulfing many sectors of the economy. Williams’ speech on Tuesday was music to the ears of gold investors and ushered in a $10 move higher.

The chart below shows the Comex gold “continuous contract” going back to the beginning of the current bull move (late 2015). Gold appears to have successfully held the $1440-1450 area of technical support. While the jury is still out on this – i.e. there’s still a good possibility of a sell-off to re-test this area – the relative positioning of the MACD shows that gold is technically oversold. Moreover, since this bull cycle commenced, gold has staged a big rally when the MACD has been as low as it is now.

With both technical and fundamental factors aligned, I believe there’s a good chance that gold will head toward at least $1550 by Christmas. The open interest in Comex gold hit another all-time high on Monday (November 18) as the shorts tried to fight gold’s big bounce Monday morning. If the gold price continues moving toward $1500, short-covering will provide added power to the move.

I spent many years working in various analytic jobs and trading on Wall Street. For nine of those years, I traded junk bonds for Bankers Trust. I have an MBA from the University of Chicago, with a concentration in accounting and finance. My goal is to help people understand and analyze what is really going on in our financial system and economy. You can follow my work and contact me via my website Investment Research Dynamics. Occasionally, I publish on Seeking Alpha too. As a co-founder and principal of Golden Returns Capital, LLC Mr. Kranzler co-manages the Precious Metals Opportunity Fund, a metals and mining stock investment fund.