Dissecting the Stock Bubble Debate: Flow Versus Value by Michael Ballanger for The AU Report

“For every action, there is an equal and opposite reaction.” —Sir Isaac Newton (Newton’s Third Law)

In nature, where everything moves freely absent human interference, her omnipotent forces are allowed to manifest themselves in manners that create a living ecosystem that supports life in the air, on land, and on and within the oceans. It is perfectly balanced to sustain itself and has done so over billions of years.

During the Cuban missile crisis of the early 1960s, elementary school children were worried that a nuclear holocaust would cause the world to come to an end, to which my late father would reply, “The world is not going to come to an end. Humanity might come to an end but the world will be just fine.”

So, as this is now Month #3 of “not QE4,” with tens of billions of dollars very recently added to the Fed’s balance sheet, I am reminded of a conversation with a young investor during which I told him that these global levels of debt are threatening the very survival of the current bull market in stocks. His reply was much along the same line of logic as my father offered back in ’62: “Debt is not going to end the bull market in stocks. It might end the global economy but the stock market will be just fine.”

That vocal perversity perfectly capsulizes the degree to which moral hazard has invaded the public psyche. There is seemingly nothing that can or will derail the stock markets and their rightful advances toward the Trumpian Heavens.

Accordingly, I have a question for you anyone and everyone that invests in U.S. financial instruments: What actually is the Federal Reserve’s “mandate”?

The recent Fed stimulus extrapolates to over $1 trillion in liquidity over the next twelve months despite a supposedly booming economy.

The importance of this question is underscored by the recent breakout of the S&P 500 to record highs, fueled 1,000% by the injection of $60 billion per month of liquidity into the banking system by the Federal Reserve bank, whose balance sheet is already overflowing at $1 trillion (yes, with a T) in “assets,” many of which are carried at “par” (100% of maturity value) despite being completely worthless.

Now, the official mandate from the website is “promote effectively the goals of maximum employment, stable prices, and moderate long term interest rates.” Nowhere is there anything about “stock prices” and yet, despite overwhelming evidence of a preoccupation—no, obsession—with the level of the S&P 500, they would argue until they are blue-in-the-face that stock prices are not part of their mandate.

I submit to you that the sheer insanity of the current sovereign debt markets implies that the central bankers, knowing full well that governments the world over are insolvent, have decided that whatever credibility they have left can only be retained as long as stocks remain buoyant. To wit, the S&P, after limping along into September after a rudderless summer, began to resemble a replay of 2018, when out of the blue, up sprang the central planners. and before you could say “printing press,” the Fed had launched REPO actions. Why they needed to “reliquefy the system” with near-full employment (BLS numbers), inflation running “below target” (2%), and long-term yields at 50-year lows is beyond my ken. With zero problems related to the Fed mandate, what was Jay Powell looking at when he pulled out the old Hank Paulsen “bazooka” and launched the singular most gold-and-silver-friendly action since the 2008 Great Financial Bailout.

There are virtually no protests (of any size) in the USA, so what exactly spooked the Fed? 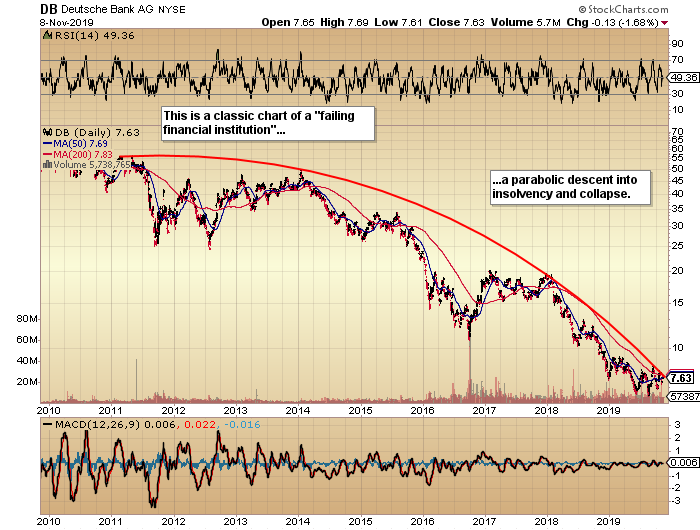 Dovetailing back to the title of this missive, it is really quite easy to identify optical anomalies in financial markets based purely on the reaction of prices in the context of sudden new liquidity. When several hundred years of financial market history is used as a backdrop against which to compare current market behaviors, what unfolds is a macabre distortion of Newton’s Third Law. If a nongovernmental, privately owned agency pumps several trillion dollars of their currency units into the “system,” they are diluting the purchasing power of that unit. These being “digital entries” referencing “cash,”the reality is that every time you cash your paycheck, you are getting less purchasing power because of the debasement of “currency” as a medium of exchange.

When one looks at a balance sheet, on the left side of the sheet under the title of “Assets” you always find “cash.” That does not mean the entity necessarily has a private vault with a stack of paper dollars held within; it is simply a bookkeeping entry, a fabrication, or better still, a “conjuring.” However, whatever you call it, it is that “conjuring” of liquidity that remains the singular most powerful driver for stocks, and it matters not from whence it came. Investors no longer bother to question the source of this added liquidity because there is no source. In the same way that a sorcerer conjures up demons with the wave of a wand or the utterance of magic words, the Fed simply uses a keyboard and a series of press releases to conjure up a trillion dollars.