CHINA, BOLIVIA AND VENEZUELA ARE PROOF THAT SOCIAL DEMOCRACY CANNOT THRIVE IN THE GLOBAL CAPITALIST ORDER

CHINA, BOLIVIA AND VENEZUELA ARE PROOF THAT SOCIAL DEMOCRACY CANNOT THRIVE IN THE GLOBAL CAPITALIST ORDER by Jeff J Brown for China Rising

TDC Note – While I agree with Jeff’s view of what has / is happening in these nations I respectfully disagree with his assessment that any government is not going to use, TV, radio, print / internet mediums to sway the populace one way or another. They always have and always will.

Pictured below: the US orchestrated coup in Bolivia is being led by White supremist, fascist, Christian fundamentalists, just the type of jackbooted brown shirts the West loves, in order to plunder and rape countries around the world. Washington, London and Paris put fascists and mass murderers in power, because they make Wall Street billions in criminal blood money. Pictured center above is one of their psychopathic henchmen, Luis Fernando Camacho, giving a Nazi salute and wearing the Nazi Iron Cross. Notice Jesus Christ is portrayed on the flag on the right. Racist inspired blood is going to flood the Native streets of Bolivia. Read this article and get goosebumps of revulsion (https://thegrayzone.com/2019/11/11/bolivia-coup-fascist-foreign-support-fernando-camacho/). 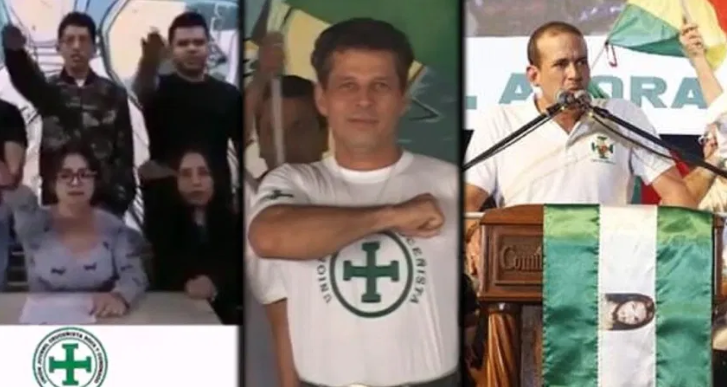 The US-orchestrated, fascist, racist overthrow of the popularly elected socialist government in Bolivia is depressing, but not surprising (https://www.rt.com/op-ed/473181-morales-bolivia-american-coup/). As a tweet shown in this article says, it’s nothing new, as this is US coup #5 in Bolivia,

Western and White Supremist Bolivian capitalists will now plunge it into another Libya, while exterminating uncounted thousands of Native Americans (https://www.rt.com/news/473494-putin-bolivia-morales-libya/), as Russian President Vladimir Putin is already warning.

Before 2006, Bolivians, like most peoples of Central and South America, were sodomized, plundered, exterminated, enslaved (mostly) Natives, watching helplessly as their natural and human resources enriched the local White elite 1% (ongoing colonial, European family lines, who started settling in the 15th century), Washington, London and Paris. In the last 13 years, Native President Evo Morales’ socialist administration has reduced extreme poverty from 38% to 15%, and overall poverty from 60% to 35% (https://www.theguardian.com/world/2019/mar/07/how-a-populist-president-helped-bolivias-poor-but-built-himself-a-palace). Socialism shrank the GINI index by an eyepopping 19% and tripled the median household income, something poorer and poorer Euranglolanders can only dream about. (https://www.thenation.com/article/economics-socialism-bolivia-evo/). Until this week, the economy was the fastest growing in the region, averaging over 4% a year (https://www.macrotrends.net/countries/BOL/bolivia/gdp-growth-rate). This will all be stolen back now, post-capitalist coup.

How did this happen? They nationalized key sectors of the economy (stolen land, oil, gas, copper, lithium) and began processing their mineral wealth into value added exports, as explained by deposed Morales here (https://www.rt.com/news/473353-evo-morales-imf-exports-oas/). This money was plowed back into infrastructure (schools, hospitals, rural roads) and social services (health care, education and retirement pensions) to improve the quality of life for the 99%, at the expense of the 1%. They did it without being plundered by IMF-World Bank gangster banksters and their corrupt loans that enrich Wall Street and each country’s local elites. Read John Perkin’s book, Confessions of an Economic Hit Man, which he is now offering for free (https://www.academia.edu/7614432/John_Perkins_Economic_Hit_Man_Summary_of_Confessions_of_an_Economic_Hit_Man_About_John_Perkins_Author_of_Confessions_of_an_Economic_Hit_Man). You can see how the global elite destroy entire economies to starve and exterminate millions of mostly dark-skinned poor, in order to plunder trillions of dollars in assets. Another scathing exposé of how Western elites legally rape the weak, in the guise of the “Liberal World Order” is Paul Blustein’s And the Money Kept Rolling In (and Out), which was being replayed again by Argentina’s neoliberal ex-president Mauricio Macri (https://www.gettextbooks.com/isbn/9781586483814/). More about this snake in a suit below.

Postwar, all of this shows how the transfer of trillions of dollars of human and natural capital are extracted and exploited by Eurangloland, so their poorer and poorer citizens can borrow printed money to buy Huawei/Apple mobile phones, Haier appliances and Lenovo/Dell computers on credit, all manufactured in communist-socialist China, while their elite owners become even bigger trillionaires and billionaires. When the current Western capitalist hyperbubble implodes in the near future, these same citizens will be driven even further into lower standards of living, but not communist-socialist Chinese, North Koreans, Laos, Vietnamese, Cubans, Eritreans and Iranians.

This brings us to the crux of my article. Western Europe, Bolivia, Venezuela, Ecuador, Brazil, Argentina, Mozambique, Angola and all other countries that practice social democracy simply cannot thrive in the global capitalist order, without one key ingredient, and it may not be what you think.

Yes, you can nationalize core industries and second, repatriate stolen land to build agriculture, infrastructure, development and industrialization. The prior was done by Europe and every other social democracy after World War II. The latter was done by China, North Korea, Venezuela, Iran, Cuba, Laos, Vietnam and many others, or former Soviet states like the “Stans” and Belarus, which just kept the land in public hands.

Today, after 75 years of relentless Big Lie Propaganda and neoliberal treachery, almost all of Europe’s key industries have been de-nationalized and much of its public assets have been privatized for profit, in the name of “free market” dogma.

So, land and industry are not enough. Even being armed to the teeth, like Venezuelans is not enough. The US and Europe cannot invade or overthrow the people’s will there, like they do most everywhere else, Bolivia being a prime example. If NATO tried to go in, it would get its butt whipped by many thousands of neighborhood militias https://en.wikipedia.org/wiki/Colectivo_(Venezuela) ). When friends like Rory Hall at The Daily Coin(https://thedailycoin.org/) ardently support gun rights in the United States, I can see his point.  Because Venezuela is locked and loaded, it is successfully drawing a line in the geopolitical sands. This is thanks to murdered former president Hugo Chavez (https://www.strategic-culture.org/news/2016/03/14/murder-chavez-cia-and-dea-cover-their-tracks/), who understood Mao Zedong’s rejoinder that revolution must be defended by the barrel of a gun. Thus, Venezuelans will not be occupied by NATO.

But, the West is killing and starving tens of thousands of Venezuelans every year with genocidal economic sanctions and stealing billions of dollars in overseas assets. Sanctions and piracy are nothing more than warfare and crimes against humanity, making a mockery of the United Nations charter.

So, how can social democracies thrive in the face of global capitalist terrorism? The secret to survive and hopefully thrive is to nationalize the media. Venezuela’s media is owned by the same White supremist local elites who are destroying the country, with the help of the CIA and its thousands of faux NGOs. Ditto Bolivia (https://www.telesurenglish.net/news/bolivia-created-over-four-thousand-accounts-to-legitimize-coup-20191113-0011.html). We can see the suffering, slaughter and chaos, as a result.

The following story illustrates the point. When neoliberal thug Macri got elected president of Argentina in 2015, only to destroy the economy with tens of billions of corrupt IMF-World Bank loans that went straight into his and the local elites’ pockets, and on to Wall Street, I asked my friend, Moti Nissani (https://chinarising.puntopress.com/search/?q=moti%20nissani), who lives there, how the people could be duped into voting for such a blatant gangster.