I must begin this story today asking for your prayers for Susan Duclos as Saturday, she suffered a massive heart attack that will still require two more operations on Monday following successful surgery on Saturday. While we are incredibly grateful for the wonderful First Responders of Garrett County, Maryland who rushed Susan like the wind to the hospital and the incredibly fantastic people at the West Virginia cardiac center who are treating her, it could be a difficult road ahead for Susan, though, as you all know, she is a fighter!

A very sad ‘sign of the times‘ we’re now living in, as we’ll explore in this ANP story, ‘signs of the times‘ are everywhere as we hear in the 1st video at the bottom of this story, a very important interview that Doug Hagmann did with Steve Quayle and Celeste Bishop-Solum of Shepherd’s Heart titled “At The Brink Of The Days Of Unrest“. The 2nd and final video at the bottom of the story is also a must-watch titled “Everything We Know Is About To Change 2020/2021“.

As Steve and Celeste warn us within the 1st video below, America is rapidly being pushed towards the ‘end of the age‘, not the ‘end of the world‘ as Steve explains but the end of the times we’ve been living in, with America in a death spiral with no real political or military solutions to the problems the world faces and potentially tremendous chaos ahead.

And like clockwork, days later Zero Hedge put out this new story titled “We Now Have Mass Public Unrest In France, Spain, Algeria, Iraq, Lebanon, Egypt, Hong Kong, Venezuela, Chile, Ecuador And Bolivia” within which they lay out for us the ‘ages and ages of rage‘ the world is now going through with many warning the same happening in America is on the horizon.

Ages And Ages Of Rage

Indeed, consider that we now have mass public unrest (on and off) in: France, Spain, and that 24% AfD vote in Germany, and Brexit in the UK; Algeria; Iraq: Lebanon; Egypt; Russia; Hong Kong; Venezuela; Chile; Ecuador; and Bolivia. Plus deepening polarisation in the US – and one could add the middle-class disruption of Extinction Rebellion in Australia, Canada, and others.

In short, there isn’t a continent that isn’t seeing unrest in some form, and as Branko Milanovic notes today, one wonders if this isn’t all a little 1968-ish.

Of course, one can’t usually join dots that simply, but if this is 1968-redux then consider the historical echoes. The Prague Spring was violently crushed by Soviet Tanks and the West was powerless to prevent it. Meanwhile, student uprisings in the West produced social reforms and a policy swing to the Left. Along with the Vietnam War, that contributed to the end of the USD peg to gold and the first phase of the global Bretton Woods order – and then to very high inflation in the 1970s, which was ultimately ended by the Volcker Fed and the current phase of deflationary neoliberal globalisation that is once again pushing people out onto the streets. 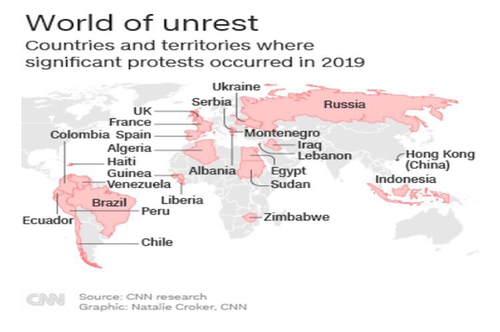 As we see in the map above taken from this Zero Hedge story, all across the planet unrest is breaking out over economic or geo-political strife yet as Michael Snyder reported in this story at The Most Important News titled “Civil Unrest Is Erupting All Over The World, But Just Wait Until The United States Joins The Party“,  America is also being pushed rapidly towards the edge with the ongoing Democratic impeachment attempt nothing less than a ‘coup‘ with CNN fantasizing about a ‘President Nancy Pelosi‘, just as we had warned might be the Democrats plan back on October 19th in this ANP story titled “The Blueprint For Democrats To Complete Their Overthrow Of America Is Already Written As Retired Admiral Calls For President Trump To Be ‘Removed’ From Office, ‘The Sooner, The Better'”.

And with Texas Congressman Louie Gohmert now warning on the Congressional floor that the impeachment coup could lead America to Civil War with anger growing among Conservatives and the right loading up for bear, Snyder’s warnings of what might happen in America may be closer to coming true than any of us believe. A brief excerpt from Snyder’s story below explains why no matter what way impeachment goes, tens of millions of Americans are going to be furious.

The impeachment process is bringing a focal point to the deep anger that has been building on both sides of the political spectrum for many years. Now that this process has begun, there is no going back, and both sides believe that there is only one result that will bring justice.

For the left, any result that does not remove Donald Trump from office will be a bitter disappointment. The Democrats in the House of Representatives are going to draft articles of impeachment, and they believe that they already have the votes they need to send those articles of impeachment to the U.S. Senate.

If the Republican-controlled Senate does not vote to convict Trump and remove him from office, this will greatly upset the left, and could result in an explosion of anger in our city streets.

On the other hand, if the Republican-controlled Senate does vote to convict Trump and remove him from office, tens of millions of hardcore Trump supporters are going to be absolutely livid. There would be an explosion of righteous anger on the right, and it would almost certainly spill into our city streets.

Of course it is likely that both sides will start protesting well before there is a final result, but once the final vote in the Senate happens that is when things are likely to get very interesting.

The Democrats should have never gone down this road, because one way or another this process is going to tear us apart.

If our founders could see us today they would be rolling over in their graves, because this is not what they intended.

With even President Trump warning via tweet that his impeachment could lead to another Civil War in America and nearly 7 out of every 10 Americans agreeing with him, we should all be completely prepared for whatever is ‘unleashed‘ in the days ahead with a new decade just over 60 days away and more and more warning signs of danger ahead. 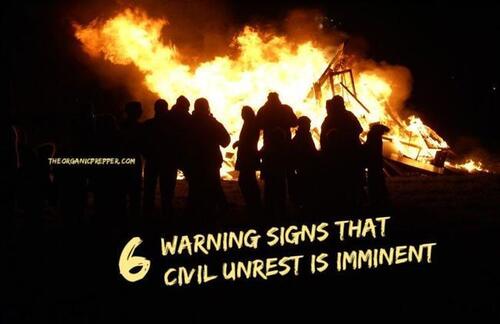 As the Organic Prepper had reported in this October story titled “6 Warning Signs That Civil Unrest Is Imminent“, being fully aware of our surroundings is crucial with unhinged leftists already unleashing violent attacks against President Trump supporters, often simply for them wearing a MAGA hat, and with tensions even brewing hotter now as Congressman Gohmert warned, there may never be a more important time than now to be fully prepared.

With host Stefan Molyneux, topics range from philosophy to economics to art to how to achieve real freedom in the modern world. Passionate, articulate, funny and irreverent, Freedomain Radio shines a bold light on old topics - and invents a few new ones to boot! Freedomain Radio is the largest and most popular philosophy show on the web, with over 100 million downloads and is 100% funded by viewers like you. Please support the show by signing up for a monthly subscription or making a one time donation at: http://www.freedomainradio.com/donate