– When The Impeachment Debacle Fails, The Communist Coup Plotters MUST PAY For Their Sedition!

It is time for Americans to be honest with themselves. The media, in its rush for impeachment, are lying to us. They pushed the Russian collusion hoax for two and a half years and ended up with nothing. Having already set up the Ukrainian hoax with the assistance of Pencil neck Schiff, they moved to another location using the same liars and talking points that didn’t work with Russia. It won’t with Ukraine either.

The media is more decadent and immoral than the political class. They claim a moral superiority that is a sham. In 2018, they performed as public relations for the progressive socialist Democrats rather than do any actual reporting. They have become the propaganda arm of the progressive socialists and have stopped doing real reporting and any due diligence many years ago. They are nothing more than ventriloquist dummies spewing the talking points of their masters in the Democratic Party.

The President has survived a non-stop years-long campaign from the media and the progressive socialist (COMMUNIST!) wing of the Democrat Party to remove him from office. There is no question that the Democrats and media will go to any lengths of impeaching President Trump against the wishes of the American people. They understand that they must abuse power to regain power. It has become clear that they talk of the Constitution but refuse to follow it without any sense of fairness.

Thursday morning they held a sham vote in steps not used since the Soviet NKVD show trails of Stalin. The progressive socialist’s rubber-stamped what Adam Schiff has been doing for the past month, allowing secret hearings, and rules that decimate the rights of both the President and the American people to see the results. If the case is open and shut for impeachment, allow the American people to see the depositions. Going to the sycophantic press to claim you are fighting for the Constitution and patriotism is a farce. The only step missing so far is the guilty findings of the family of those who refuted the system. (Although they have made a statement in the past about Trump’s family that could quickly turn in that direction.)

Perceiving that President Trump is a rival for the American voter and is instrumental in the rejection of socialism being foisted on the American people, a show trial seems appropriate to those who thirst for power.

There will come a time when the lies being told in the media will collapse. From the Russia hoax to the faux, impeachment will be forced into the daylight. There will be apologies from the press; they will claim they were only providing information. Not mentioned is that the only information they provided was progressive socialist talking points spoon-fed to them by the leftists who search for a way to get back the power they feel they deserve. 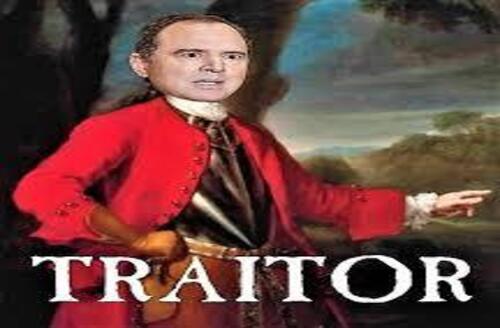 Adam Schiff is a fraud

Adam Schiff has made himself a “fact witness” in the investigation, and, as such, it is illegal for him to be the lead investigator or prosecutor in the sham that has been flashed over the airwaves. He is not an independent investigator and has been proven to have lied many times in the past. He lied about incontrovertible evidence in the Russia hoax for almost two years. The “whistleblower,” a Democrat informant who is up to his neck in a conflict of interest, was supposedly the impetus for the impeachment.

Schiff is doing nothing more than expanding the “insurance policy” that was to take President Trump out when he became President. With the assistance of the media, the leaks that have emerged from the secret depositions have all been detrimental and reported breathlessly. It is interesting that the media is not clamoring for the full transcripts to be released.

It was always Schiff’s scheme to falsely accuse the President of obstruction of justice based on a phone call that was not compelling. An abuse of power charge is also not forthcoming from the evidence in the phone call transcript made up of second and third-hand hearsay. The progressive socialist Democrats never expected the President to release the transcript of the phone call. So now they are caught running a false impeachment scam to cover their tracks.