While many in the independent media have been reporting upon the health risks that have come along with the fast-tracking of 5G into America, the topic has largely been avoided by the mainstream media, making this September story by Sharyl Attkisson at Fox Newsthat much more of an anomaly as it points out some absolutely critical health news from industry experts largely censored by the rest of the msm.

With what the wireless industry calls ‘4-G on steroids‘ already being rolled out across big US cities with promises of ‘faster than ever internet speeds‘ that will allow people to connect even more devices to their networks, their story took a fair and balanced approach to 5G, reporting that some are calling it ‘super cool‘ while also warning that many scientific experts believe 5G will deliver massive health problems to Americans.

Quoting the pre-eminent scientific expert on the subject, Professor Martin Pall, the Fox News story reported that Doctor Pall is so concerned about cell phone radiation and EMF and electrico-magnetic fields that he refuses to even hold a mobile phone. In fact, he doesn’t engage in any wireless communication. He says he uses a wired mouse on his wired computer, has a shield over the screen that reduces EMF, and even wears special EMF-resistant fabric.

Also reporting in their story that Dr. Pall’s concerns are backed up by dozens of peer-reviewed scientific studies,  with Dr. Pall’s own credentials including a Physics degree from Johns Hopkins University as well as a Ph.D. in biochemistry and genetics at the California Institute of Technology, Dr. Pall’s words of warning should be listened to closely by those who think that 5G will be harmless.:

“I’ve got both the life sciences and the physics,” says Pall. “It’s the way in which these two interact, which is crucial for understanding how EMF impact the cells of our bodies.”

According to Pall, scientific studies show EMF impacts all of the cells in our bodies and can produce “neuropsychiatric effects,” reproductive problems, anxiety, sleeplessness, headaches and oxidative stress, which he says is involved in essentially all chronic diseases.

“So I’m, I’m deeply concerned about the situation.”

Pall isn’t alone in his worries. Consumer groups and activists are speaking out across the U.S. and the world. At least three expert medical groups have linked certain kinds of EMFs to cancer, particularly childhood leukemia. They are: the U.S. National Institute of Environmental Health Sciences; a working group under the World Health Organization (the International Agency for Research on Cancer), and the European Commission Scientific Committee on Emerging and Newly Identified Health Risks— which studied cell phones in particular.

And as we read in the crucial new SQ alert that we’ve republished in the next section below, one man gives his personal testimony of the biological consequences of 5G on his own physical being, warning that he feels we’re witnessing nothing less than a satanic weapons system being unveiled in America. So in the final section of our story, we’ll take the advice of Dr. Pall and look at a number of different ways that we can protect our families and ourselves from Wifi and 5G with it now being fast-tracked across America. 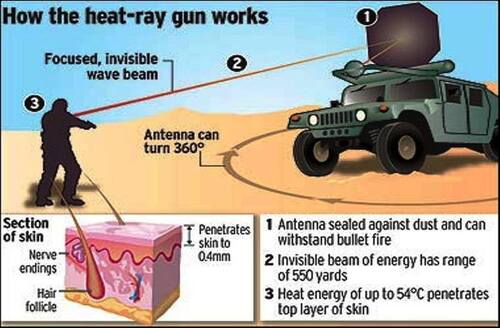 According to this February story over at Scientists For Wired Technology, a website dedicated to exposing the dangers of 5G, 5G will be using the same frequencies as the US Military’s pain-inflicting active denial system which shoots out an invisible beam of energy which can penetrate and burn people’s skin, causing them to immediately cease whatever activity they are doing.

Reporting within their story that 5G technology is being exposed to the same kind of waves day in and day out, only at a lower power than the ADS, as we read in this must-read new SQ alert below from Steve Quayle’s website, one man who has already had experience with 5G is issuing a loud and clear warning about what he believes this really is.

ONE MAN’S PERSONAL TESTIMONY, OF THE BIOLOGICAL CONSEQUENCES OF 5G, ON HIS PHYSICAL BEING:

This is a satanic weapons system. What I feel now others will in the future. It’s very painful please warn others: Okay, I live in HUD apartments in Carson City Nevada. Recently they installed a new WiFi system, apparently by government mandate according the the managers. I have been sensitive to WiFi signals as has my wife and one of our daughters. This is why we got rid of WiFi. This new signal is stronger than anything I’ve experienced and is quite painful. I can’t bear to be in my own apartment with my family for more than a short time.

It’s also in a government building I clean. The signal is becoming more pervasive and I believe it’s 5G though I am certain. My own increase in sensitivity is probably the result of long term exposure from working. The primary symptoms are blurred vision, sinus pain, cognitive difficulties, confusion, aggression, crushing headaches and leg problems. My wife and neighbor are also experiencing pain in the chest and abnormal heart beats. Sleeping there yields no rest and constant ringing in the ears as well as feeling like your eyeballs are fried. By contrast, having been out camping the symptoms fade as long as I’m outside the WiFi fields.

I have been to ER for CT because it felt like I was having a stroke but there is no visible sign of brain abnormalities. We have tested for carbon monoxide and there is none. Many people are naturally less sensitive, I presume, but I also believe that their constant use of pain killers and drugs may be a mitigating factor. Now subjectively I must say that the energy feels very much like an unclean spirit. Kind of nauseating. Those who have discerning of spirits will know what I mean if they’ve felt it.

The danger, I believe, with this ever expanding network, is not only in the absolute control over every detail of life provided by IOT, but that there are segments of the population who will exhibit bizarre and aggressive behavior inexplicably. The seductive and addictive nature of this tech will positively ostracize those who dare take this poison bottle from the baby that is society. I wish to testify as a warning. I sincerely believe this is a weapon system against which conventional arms are and will be of no effect. Without a mind, you’re nothing. When people finally do begin to succumb they may well be misdiagnosed. Whether this is some plot or simply the result of profit driven dog eat dog human behavior is of little consequence. The frog that didn’t feel the hot water is now screaming a warning. D.P.

And ‘D.P.‘ isn’t alone in his warning. As we’ll hear from Dr. Martin Pall in the first video at the bottom of this story, the dangers of 5G and WiFi are being totally ignored by the msm. And as we see in the following excerpt we’ve republished directly below from this story at Health Impact News, this ‘weapon‘ could easily be used stealthly against the American people.

This article will focus on the question of how this technology could be used as a silent weapon against people who don’t conform to the plans of the U.S. Government.

The public position will be that these technologies, if developed into weapons, will be used against terrorists and those who pose a threat to national security.

However, because these are “stealth” technologies where the person being targeted would not even know they were being targeted, they could potentially also be used against people who object to mandatory vaccination, medical kidnapping, the nationalization of our private health data, the use of toxic chemicals in food, mandatory indoctrination of children in the public education system, mainstream media brainwashing, the collection of information about our religious and political beliefs, the denial of the right to assemble in peaceful protests against the overreaching power of national and state government, to name just a few.

As we had reported in this August 27th ANP story titled “On Guard If You Live In One Of These US Cities Or Areas! Map Shows Where Monstrous Health Problems May Soon Arrive As 5G Is Fast-Tracked Across America – 5G Rollout Goes Forward Despite Health Concerns Expressed By Experts Around The World“, one of the scariest thoughts in the world to us are what our young children are being exposed to in this world we’re now living in, especially the very youngest of all and most innocent and most easily harmed by the effects of wireless radiation, newborn children.