Over the weekend, U.S. forces conducted a raid that resulted in the death of Abu Bakr al-Baghdadi,  leader of the terrorist group ISIS, responsible for thousands of deaths across the middle east.

According to multiple reports, and a statement by President Trump, the ISIS leaders ended up blowing himself and three of his own children up to prevent his capture.

Normal Americans would be thinking “good riddance to bad rubbish,” considering ISIS was known for beheading journalists, killing Christians throughout the middle east and terrorizing entire nations, but the liberal media in America, rather than celebrating the death of a monster, has once again shown their propensity to glorify terrorists and terrorism.

We’ll starts with Washington Post who is being roundly criticized for their multiple edits to their headline in an article regarding the death of the ISIS leader.

Make no mistake, this was a self-induced injury for Wapo, as their original headline accurately described Baghdadi as “Islamic State’s ‘terrorist-in-chief,'” before changing it to a headline that “sugar coated the terror inflicted by Abu Bakr al-Baghdadi,” as reported by USA Today.

The new headline called Baghdadi an “austere religious leader.” Social media went nuts on them for that change as the Twitter hashtag “#WaPoDeathNotices” immediately started trending with users making up fictional fawning headlines for “death notices” written by Wapo for other  monsters, such as Hitler, Nero, Genghis Kahn, Charles Manson, Mussolini and more.

In the midst of the brutal backlash against Washington Post, the paper then made a third edit to their headline, which now reads “Abu Bakr al-Baghdadi, extremist leader of Islamic State, dies at 48.”

Had they simply left their original, completely accurate headline alone, Wapo may not have been mocked as badly, although as some have noted the entire obituary was “weird,” and “absurd,” as they described Baghdadi as a  religious scholar, and ended their piece with his call to arms to join ISIS and conquer the west. 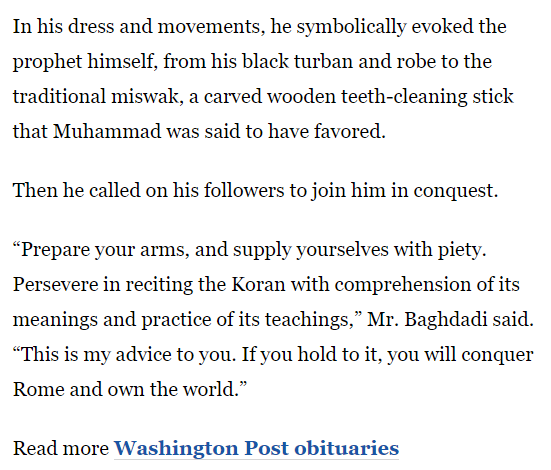 While many might say, “It is one article, one mistake,” a loook into other liberal establishment media personalities and articles, we see a pattern emerging of not only glorifying Baghdadi, who reigned over a terror group that is known for rape, torture, crucifixions, and outright genocide, but of others attempting to excuse Wapo, such as CNN’s Brian Stelter, who tries to claim that example like this are “occasional terrible screwups.”

The support of a CNN talking head for Wapo’s glorification of a terrorist is not all that surprising since CNN itself is full of pundits that have been known to defend domestic terror groups such as Antifa, claiming that their constant violence against those that disagree with their ideology simply shows that “no organization is perfect,” as another CNN pundit Chris “Fredo” Cuomo rushes to defend Antifa’s attacks against police, journalist and peaceful protesters.

BLOOMBERG JOINS WAPO IN THE “FAWN OVER TERRORIST’ CLUB

As Twitchy noted on Sunday, after Wapo’s PR disaster, Bloomberg Politics decided join the “fawn over terrorists” club, with their own piece titled “Who Was Islamic State Leader Abu Bakr Al-Baghdadi?”