Welfare State now complete as takers outdo producers in the fact that government issues more benefits than it takes in from taxes by Ken Schortgen, Jr for Shotgun Economics

When former President Lyndon Bains Johnson in 1964 issued his proclamation that the government was ready to go full bore in a ‘War on Poverty’, very few realized it would be the beginning of the end for the American system, economy, and culture.  And sadly this transition would only take about 55 years as on Oct. 24 we have finally reached the point where the government spends more on welfare than it does receiving tax revenues.

The takers in America have now outdone the producers. 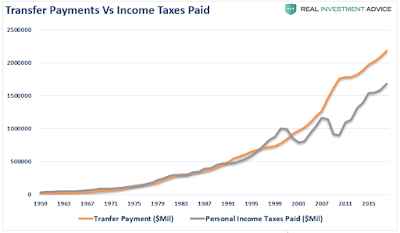 Without government largesse, many individuals would literally be living on the street. The chart above shows all the government “welfare” programs and current levels to date. While unemployment insurance has hit record lows following the financial crisis, social security, medicaid, veterans’ benefits, and other social benefits have continued to rise and have surged sharply over the last few months.

With 1/5 of incomes dependent on government transfers, it is not surprising that the economy continues to struggle as recycled tax dollars used for consumption purposes have virtually no impact on the overall economy.

In fact, in the ongoing saga of the demise of the American economy U.S. households are now getting more in cash handouts from the government than they are paying in taxes for the first time since the Great Depression. This, of course, at a time when the current administration is more enthralled with trying to find some universe where cutting taxes actually increases tax revenues as a percent of GDP rather than actually cutting spending.

In 2018, households received $2.2 trillion in some form of government transfer payments, which was more than the $1.7 trillion paid in personal income taxes. – Real Investment Advice

Welcome to the nanny state of Socialism… and thy name is America.