Tick Tock! Walls Closing In On Deep State – Media, Democrats So Panicked They Are Already Spinning Like Mad 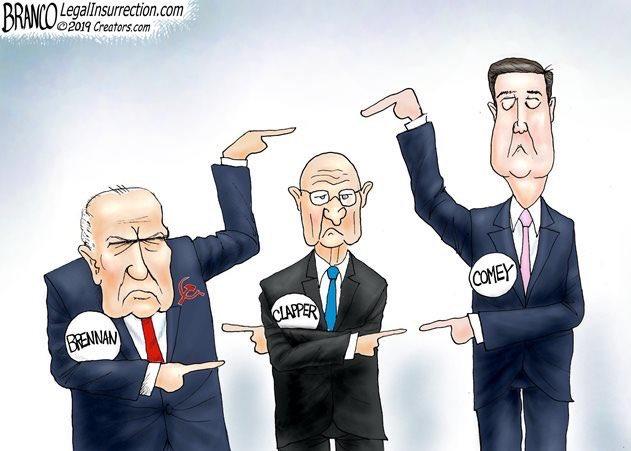 It appears that the public is about to get the answers we have all be waiting so impatiently for in regards to the multiple investigations being conducted into the actions of top level intelligence community officials leading up to, and after, the 2016 presidential election.

On Thursday the DOJ Inspector General, Michael Horowitz informed congress that the declassification process in regards to his his upcoming report from his lengthy investigation into potential Foreign Intelligence Surveillance Act (FISA) abuses ahead of the 2016 presidential election, was not only nearing completion but that his final report would be “released publicly with few redactions,”  and that once the classifications are concluded he will begin the process of finalizing his final report for release and he does “not anticipate the time for that review to be lengthy.

According to Fox News “Horowitz noted that he did not anticipate a need to prepare or issue “separate classified and public versions of the report.”

This means that Congress and the public will see the same report, so politicians cannot preemptively “spin” a narrative before the public gets to see it. Once the final report is handed to Attorney General Bill Barr, if past reports are anything to go by, he will be releasing it to Congress simultaneously as he does to the public. 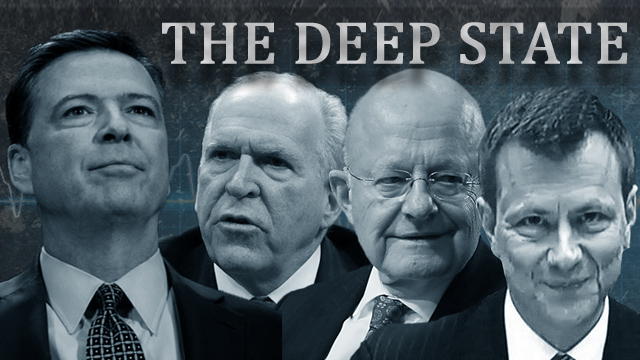 U.S. Attorney John Durham was tapped by AG Barr to conduct a thorough review into the origins of the Russia investigation, which led to the appointment of a special counsel. Durham has been working in coordination with the DOJ IG, since much of the investigations overlapped.

Within hours of the news breaking that the IG report is near completion and will ready for release soon, news broke that Durham’s “review” status had been officially changed to a “criminal” investigation, meaning the investigators now have the ability to subpoena witnesses, file charges, and impanel fact-finding grand juries.

According to multiple reports the change in status from review to criminal investigation will be explained by the IG’s report into the FISA abuses.

U.S. Attorney John Durham’s probe into the origins of the Russia investigation has become a criminal inquiry, two sources told Fox News on Thursday – and an upcoming report on alleged FBI surveillance abuses against the Trump campaign will shed light on why, one source said. Justice Department Inspector General Michael Horowitz said Thursday his report would be available to the public soon, with “few” redactions.

Recent previous reports have shown that the timeline of the Durham investigation, reviewing the actions of senior level intelligence community members under Obama leading to the 2016 election, was expanded to include a period after the 2016 election, up until the appointment of the special counsel, based on “new evidence” that was obtained after Barr and Durham met with Italian intelligence officials.

While the DOJ IG investigation lasted over 18 months, Durham was appointed to investigate the origins of the Russia investigation in May 2019, but the nature of the overlapping reviews, and with Durham working in conjunction with the IG, having access to all the materials, including over one million documents and more than 100 witness interviews, gave him a running start into his review, which explains why he is further along that most people expected.

In preparation for the IG report and the fallout from the changed status of the Durham Investigation, the liberal establishment media, led by the New York Times, and Democrats, are already attempting to discredit both investigations by implying that ‘alarms’ are being raised that the Durham investigation is “political payback,” on behalf of President Trump.

As Deputy Director of Communications – Rapid Response for @realdonaldtrump’s 2020 campaign, Matt Wolking, points out, “Without a shred of evidence, the NYT is feeding the conspiracy theory that Barr and Durham are engaged in a political witch hunt. The greatest political scandal in the history of our country could soon be exposed and the media is laying the groundwork to defend the perpetrators.” 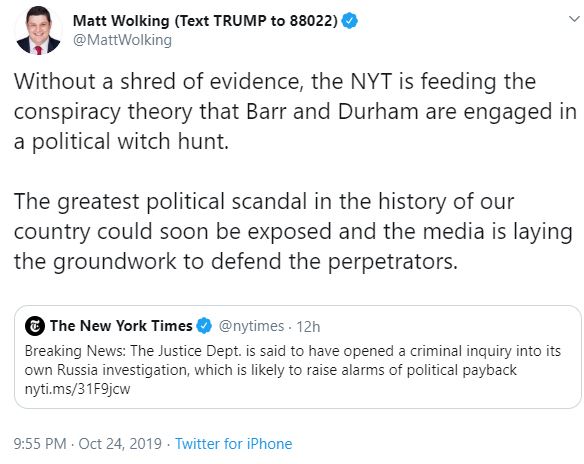 It didn’t take long at all after the NYT promoted their article with the preferred narrative before Democrats and other liberal media outlets latched on to that narrative.