In late August two actors, Eric McCormack and Debra Messing from ‘Will & Grace’ were slammed by critics on both sides of the political aisle for demanding the names of attendees to a fundraiser held in Beverly Hill for President Trump in order to “blacklist” those donors.

After learning of the scheduled event, McCormack sent out social media post asking The Hollywood Reporter, who published a piece about the event, “Hey, @THR, kindly report on everyone attending this event, so the rest of us can be clear about who we don’t wanna work with. Thx.”

That was followed up by McCormack’s co-star Debra Messing, who posted “Please print a list of all attendees please. The public has a right to know.”

Both McCormack and Messing started backtracking after massive online backlash, claiming they were not attempting to create a blacklist against Hollywood Trump donors, but their initial demands were very clear. 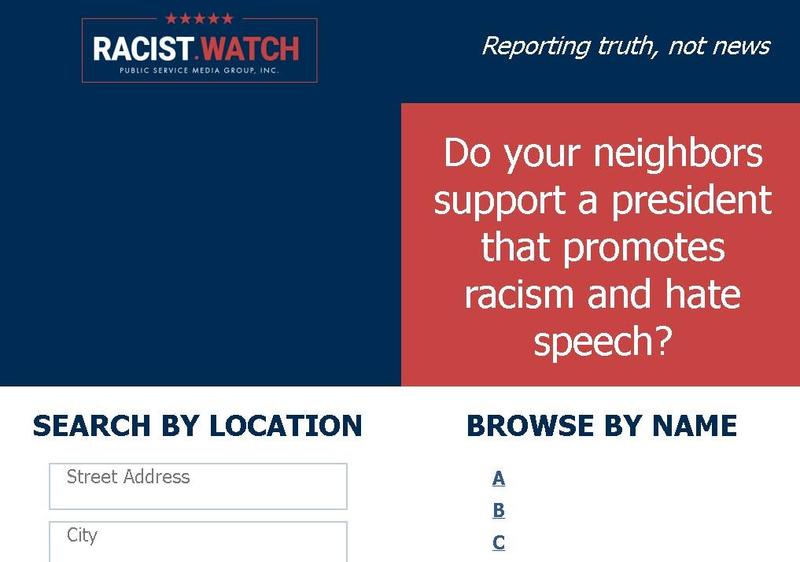 THIS IS HOW CIVIL WAR BEGINS

As it pertains to Hollywood, the worst that would have happened is that certain snowflakes would refuse to work with others simply because of their political leanings, but we see now, that some cowardly liberal(s) attempting to literally turn neighbor against neighbor in a time where radical liberals have been documented harassing and verbally and physically attacking Trump supporters.

A website, initially called “Racist Watch” was created on August 17, 2019, according to a domain lookup, which identifies names and locations of all donors to President Trump from 2016, and are adding recent donors to their maps.

The group calls itself “Public Service Media Group,” and the search function is set up, as shown in the screen shot above, to search out which of your neighbors donated to President Trump by address, or city and even by name.

Megan Fox over at PJ Media tested the function for New York City and published the following screen shot:

Look how many are even in deep blue New York City! If anything, people with Trump Derangement Syndrome are going to flip out when they search their neighborhood and find themselves surrounded by “racists.” I think they’re going to need a bigger safe space.

After the website was exposed, the site went down for maintenance, with the message “This site is under maintenance and will be up shortly with all new mapping of recent Trump Donors,” and apparently a name change to the website as it now says “Donald TRUMP. WATCH, instead of RACIST.WATCH. The URL for the website address still shows “racist.watch.”

As the note on the website now shows they fully intend to provide “new mapping of recent Trump donors.”

This site has only one function and that is to turn neighbor against neighbor, which given the documented violence we have already seen against Trump supporters, will lead to violence within communities.

Fox over at PJ Media, does see one upside to this website:

However, when I looked up my zip code I realized that this is a great tool to find new friends near you. It’s like a dating app for finding friends who aren’t crippled by hatred and mental illness. Isn’t it always a bummer when you think you’ve met someone nice and then they ruin it by telling you all their irrational fears about the president putting gay people in concentration camps?

This website can solve that problem. It’s my suggestion that everyone needs to look up their address on this site right now and identify people near them who are clearly decent, patriotic Americans and go bring them a basket of muffins or something. Go make a new friend today. Thanks “Racist Watch,” you demented loons.

Should radical and unhinged liberals decide to confront, harass or attack those identified as Trump supporters in their area, those same Trump supporters can band together to fight back, but again, one would have to be blind to not see the potential large scale conflict within communities that would bring forth.

COWARDS BEHIND ‘RACIST.WATCH’ ARE HIDING THEIR OWN IDENTITIES

Considering those behind this website are deliberately attempting to foment tension and even violence between neighbors and community members by openly encouraging people to identify and locate Trump supporters, it is ironic that in a domain look up for ‘https://racist.watch/‘, every bit of identifying information about who started the website, where they are located, etc…. is listed as “REDACTED FOR PRIVACY,” as shown in the screen shot below.