‘Extinction Rebellion,” was founded in Britain but has instigated zealots in multiple countries, to protest against “climate change,” formerly pushed as “global warming,” and it appears that these ongoing protests are starting to annoy the very target audience these protesters are trying to convince that the world must “reduce greenhouse gas emissions to net zero by 2025,” because in their words“we are in the midst of a mass extinction of our own making.”

Hundreds of these protesters across multiple nations have been arrested because their “protest” apparently includes blocking public transportation in the UK, and blocking traffic in the U.S., among other highly annoying antics, but it seems that ordinary citizens just trying to get on with their daily routine and life, have had quite enough of these climate change zealots.

Unlike Antifa groups, the Extinction Rebellion protesters are non-violent, but they are very annoying, especially for people trying to get to work to earn a living, and finding themselves unable to because these protesters are blocking the streets, holding signs that say things like “walk the talk,” while signing their little chanting songs and passing out flyers.

In the two clips below, which have recently gone viral, both of the same event, but from different angles, we see cars being blocked by the protesters in San Francisco, horns blaring and people angered, when one man, whom some have dubbed the “hero,” rips the sign out of two of the protesters hands, carries it off and chucks it over a fence, while the people who had been blocked cheer for him. Then when one of the protesters tries to get into his face with her phone camera, he takes it and snaps it in half.

In the close up version, when one of the protesters asks “what is wrong with you,” the man, wearing hospital scrubs, yells, “I got to go to work….” Before that he tells them all to “get the F*** out of the way.”

On Twitter, the close up version of this scuffle has received over 10.4 million views since October 18.

The second angle appears to be someone above the scene, perhaps in an apartment, while capturing the protest blocking traffic, and one of the people there can be heard asking if they should call the cops on the protesters for blocking the street before the guy in scrubs grabs the sign….. but again, it is clear who the “public” was rooting for.

Needless to say, liberals on social media are calling it an “attack” on the protesters, and trying to identify the man to dox him.

They later put a screen shot of the man’s face up asking against to help identify him, while others, as seen at Twitchy, are feeling no sympathy whatsoever for the little singing climate change zealots, with one woman stating “I’d donate to his go fund me .  That was the most beautiful video I’ve seen.  That sound of her cellphone scraping across the pavement will be my new go to sound when I need to go to sleep:) RISE UP AMERICA!” 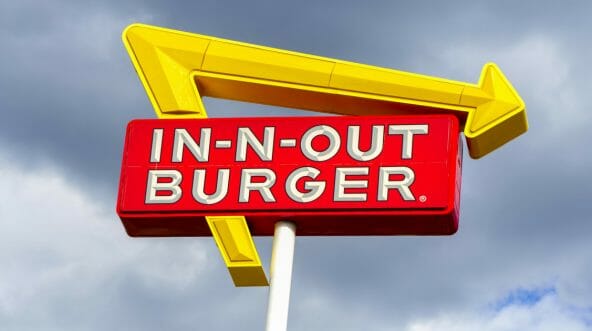 LEFTISTS PROTESTERS PHYSICALLY CARRIED OUT OF IN & OUT BURGER

The next example has two different narratives. The videos found online claim that Extinction Rebellion protesters carried a bullhorn into an “In & Out Burger” joint and an employee physically carried him out.

Others are reporting this was about leftists protesting at “In & Out Burger” because they donated to President Trump’s 2020 re-election campaign.