New Real Life Examples Of ‘Toxic Feminism’ – ‘You Are A White Male….So Shut Up!’

New Real Life Examples Of ‘Toxic Feminism’ – ‘You Are A White Male….So Shut Up!’ By Susan Duclos – All News PipeLine 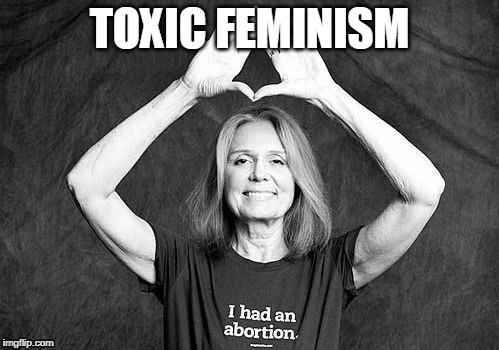 Seriously, that is a quote from a clip that has gone viral recently, of a board of trustees meeting in the Village of Oak Park, Illinois, where the group was discussing the terminology for the village’s equity, diversity, and inclusion statement, and an unhinged feminist trustee, Susan Buchanan, a white woman, informed the “white males” that they should have no voice because they do not suffer oppression.

On top of screeching at the “white male” and telling him to “stop it,” and to “shut up,” to the applause of an audience that sounds to be just as unhinged, this crazed woman also told the Mayor, Anan Abu-Taleb, a Palestinian immigrant, that he too should stop offering his input as well because “Your skin is light enough. Stop it!”

Watch below, this is what modern feminism has become:

As we have seen time and time again, after a modern day feminists gets caught on camera being an arrogant and insufferable shrew, they then decide to play the victimhood card.

In Buchanan’s case, she now claims she has been receiving criticisms, threats and calls for her resignation, making her the victim in all this because she “lost her temper at Monday’s board meeting,” but she “apologized,” so all should just be forgotten. 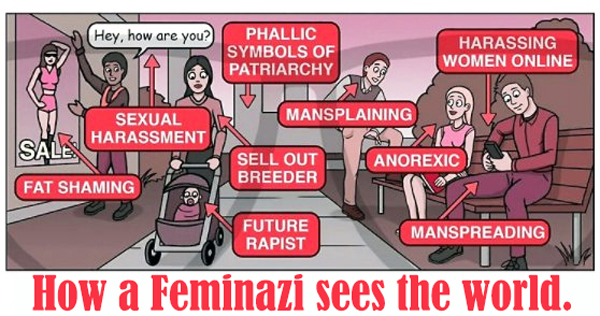 Over on social media, we see daily examples of the two prominent phases of modern day feminists, and just this morning we see yet another example over at Twitchy.

Former Miss America and failed congressional candidate Mallory Hagan decided to “virtue signal” with a post that started with “Dear every man in America,”  which always means some feminist, male or female, is going to attempt to tell other people how they should act, what they should do and what they should say.

Her message after the Dear Men:

I’m sitting at the bar by myself because I want to. Please be self-aware enough to know when we are simply not interested in carrying on conversation. 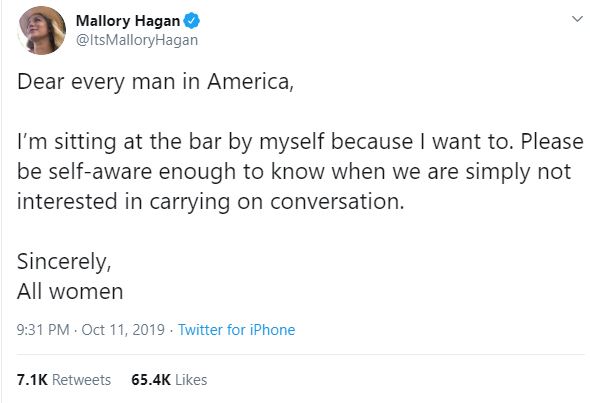 Hagan then followed up with another tweet, stating “Whoa. Haha so many triggered ass men. 😂 I didn’t say “don’t talk to people.” I said have some self awareness. Half y’all aren’t even self aware enough to know you’re the problem!”

First: She made the original statement publicly, so responses doesn’t mean the men, and the many, many women that called her out were triggered, as much as they were highlighting why someone with her type of attitude, was not someone they would even want to talk to, in a bar or anywhere else. It is a public discussion specifically addressed to “dear men in America,” so men had every right to join in the discussion.

Secondly: Many of the women that responded to her original statement, made it very clear that her arrogance in claiming to speak for “All women,” was not appreciated, and was not speaking for them.

Finally: The “hate men” and “blame all men for everything that is wrong in your life” mentality is the reason the majority of conservative women want absolutely nothing to do with the latest wave of feminism, because feminists these days act like the “Feminazis” they have been dubbed.

Make no mistake, it is not just men that are using that term, but we are noting more and more women calling out this type of arrogant and insufferable behavior. Most normal women do not hate men, nor do we take every chance we can get to openly insult them, criticize them, arrogantly think we can tell them what to do, what to say, how to sit and how to act, just because they were born with a penis.