East-West Trade War: Never Take a Knife to a Gunfight

East-West Trade War: Never Take a Knife to a Gunfight by Michael Ballanger for The AU Report

It’s a funny thing that happens when the stress of financial insolvency bubbles up to the surface. Decisions once considered “routine” (like brushing one’s teeth or walking one’s dog) suddenly have life-or-death outcomes, complete with cold sweats, sleepless nights and self-prescribed medicinal relief. Whenever I turn on the financial news stations, such as Fox, Bloomberg or CNN, I get the impression that I am watching Kabuki theatre, with exquisitely-designed puppets playing out exquisitely crafted scripts. I am immediately faced with the ageless problem of whether or not to consider the content “news,” or should I view it as simple “entertainment.”

By example, the saber-rattling of the United States of America in its anti-China rhetoric is playbill material of the highest order. You have in the red corner the aging heavyweight champion, long seated on the throne of global military and economic dominance, while in the blue corner, you have the spry young contender, hungry from decades of communist suppression and poverty with a highly motivated populace and a powerful and rapidly growing military. As much as the world may loathe it, it appears that the bell is soon to sound and the battle for global supremacy is about to begin.

The problem lies not in the war itself but in the collateral damage about to be inflicted upon the those close to the battlefield. However, at the end of the day, as the night when a youthful Rocky Marciano knocked an over-the-hill Joe Louis through the ropes, 330 million Americans trying to engage 1.433 billion Chinese is like taking a knife to a gunfight, and by that, I do not refer to an altercation of armies. I refer to an altercation of willpower.

For thousands of years, Chinese culture has taught people to think in terms of generations, while American culture has been trained in terms of days, hours and minutes. Since the end of WWII, America has fancied itself as the rightful heir to the hegemonic throne, aided and abetted by Hollywood, and its educational system that has promoted the concept that the only soldiers fighting on the side of freedom and against the Axis of Evil were the Yankees. All through the Cold War and now into the New Millennia, the Teddy Roosevelt concept of “speak softly but carry a big stick” has been replaced with “shoot first and ask questions later,” with the American forces, for the first to time invading a foreign nation—unprovoked (remember the imaginary weapons of mass destruction of the second Iraq Invasion?).

By contrast, the Chinese have opted for symbolic power, and as a result, the world is now ablaze with confrontations, literally everywhere, as the result of American-led imperialism. Only just recently has China flexed its muscle with the protests ongoing in Hong Kong, but by and large, the ramifications of two mammoth economies now in all-out conflict stands to be seen as epic, and there is very little if anything that can be done to prevent an economic winter in trade and standards of living.

The first casualties of such conflict will be currencies, where purchasing power begins to erode slowly but then completely vaporizes, as seen throughout history, in Wiemar Germany, Zimbabwe and, more recently, Venezuela. The first beneficiaries of such conflict are the ageless stores of value in gold and silver. Physical possession of one’s wealth is the cardinal rule of survival when financial Armageddon arrives; just ask any of the survivors of the nations hit with hyperinflations the importance of possession. Nowhere is the phrase “possession being nine-tenths of the law” more relevant than in chaotic societies.

The financial news and, more recently, social media have become the preferred conduits for financial propaganda by corporations, investment houses, politicians and presidents. Whatever the medium, managing both expectations and behaviors of the consuming public is used by everyone to advance either a product or a concept, and it has grown out of control to the extent that I now find it virtually impossible to differentiate between targeted messaging and actual reporting. So when I read that there is a “pending trade deal with China,” I completely discount it, because 90% of the time it is floated by either an administration official (like Larry Kudlow) or a Wall Street reporter (like Steve Liesman) in order to herd the algobots into buying stocks.

Larry Summers was the master of “behavioral economics,” and it was here that was born the acceleration of the asymmetrical wealth effect as an economic tool by which policymakers could sway consumer buying trends. From the Crash of ’87 onward, the importance of elevated stock markets morphed into an important policy tool, to the point where here, in 2019, President Trump appears obsessed with it and tweets algobot-sensitive buzzwords like “China deal” and “lower rates” in order to goose the markets. The underlying reason for all of this is to distract the masses away from the reality of the disintegrated middle class and eroded living standards, all the direct result of the errant actions of the Federal Reserve and its global central banking brethren, who collectively have brought a new level of disrespect for the integrity of purchasing power of all currencies in all nations. “If stocks are up and gold is down, things must be good, right?” Perception is nine-tenths of reality.

Comments are found in the graphic provided below. 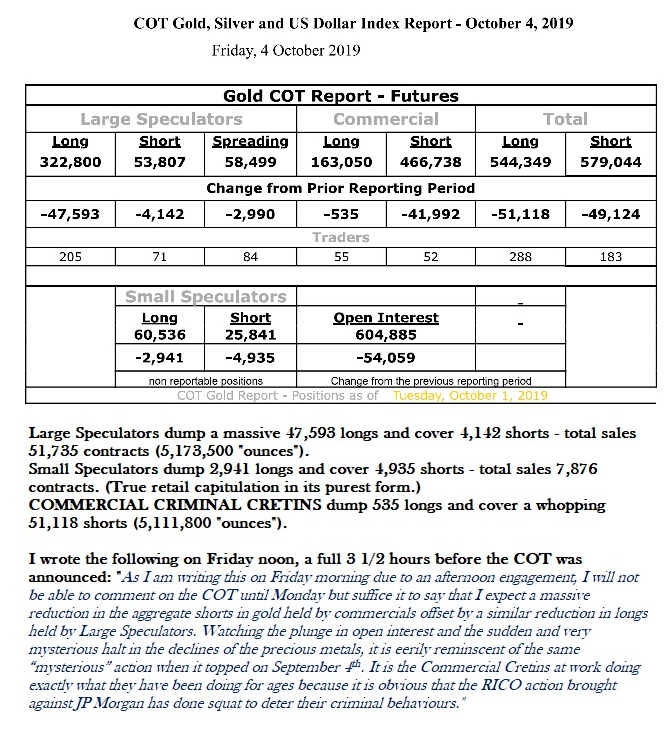 I scooped the chart shown below from my buddy David Chapman (enrichedinvesting.com), with whom I used to work while toiling for Union Securities from 2004–2011. David is a market historian and a card-carrying member of the Society of Technical Analysts, and feels that the markets have topped, as shown in the breakdown from a rising wedge formation from last week.

With bearish chart configurations such as this, I normally opt for a smattering of shorts and put options. As we have seen in the past, they have tended to be lucrative until that point where the screams from Wall Street and the sitting President force into action the Working Group on Capital Markets (the PPT), after which short sellers get immolated in a frenzy of government-triggered buy orders from a financial source that rarely, if ever, gets a margin call, and has deep, unlimited pockets. Market adversaries like the U.S. Treasury are not to be trifled with because they cannot and do not lose. Hence, I opt for volatility trades such as the TVIX or the UVXY, or calls on the VIX index. It is akin to betting on “weather” as opposed to choosing “sun” or “rain.”