The Implosion Of The Democrat Party On Full Display

Before providing some examples of a day that many Democrats in the House of Representatives would likely prefer to forget, although that will be difficult since their humiliating display of incompetence was broadcast live, we would like to point out that rank and file members of the House and the Senate make $174,000 per year as of 2019. – Source

Please keep that in mind as we proceed with what I am calling “Corey Lewandowski’s greatest hits” and he sat down to yet another hearing, and another set of questions, as part of the theatrical dog and pony show that House Democrats claim is an impeachment investigation or inquiry, depending on who is discussing it.

As Lewandowski makes crystal clear in his opening statement, he has already testified before Congress on three separate occasions, which explains his sarcasm, snark, and openly combativeness as House Democrats grandstand for the cameras, becoming more and more frustrated by Lewandowski as the hours moved along.

It is also noteworthy before getting into the total clown show dubbed as an “investigative procedures,” that President Trump asserted executive privilege on any testimony that was not contained in the Robert Mueller report. (Here is the letter sent to the committee chairman Jerrold Nadler)

THE OPENING STATEMENT SHOULD HAVE GIVEN THEM A CLUE

Lewandowski’s five minute opening statement was brutal as he referenced the Trump 2016 campaign as “historic” multiple times,  called out House democrats for attempting to undermine the 2016 election results, stated that he, unlike Hillary Clinton, never deleted his emails, highlighted that after the Mueller report was released the “fake Russia collusion narrative” fell apart and declared House Democrats’ antics was nothing more than “harassment of the president.”

“It is now clear the investigation was populated by many Trump haters who had their own agenda – to try and take down a duly elected president of the United States,” he said. “As for actual collusion or conspiracy, there was none. What there has been, however, is harassment of this president from the day he won the election.”

Frankly, after hearing his opening statement alone, it was clear he was going to decimate the House Democrats.

Instead of doing the smart thing and faking some type of emergency to get Lewandowski away from them, the Chairman, Jerrod Nadler, allowed the proceedings to continue, which led to some highly amusing moments as House Republicans, along with Lewandowski, made them look as unethical and petty as they truly are.

Here are some of the greatest hits by Lewandowski, with some help from Republican House members.

As to the video above, one of my favorite parts was when Rep. Eric Swalwell got snarky asking Lewandowski about putting his notes of his conversations with the President in his safe, asked Lewandowski “how bigs that safe,” and with a total straight face Lewandowski informed Swalwell “its a big safe congressman, there’s a lot of guns in there.”

The entertainment value there was because Swalwell once stuck his foot in his mouth when social media users warned that attempting to grab legal gun owners weapons would result in a war, and Swalwell replied “And it would be a short war my friend. The government has nukes.”

Another interesting moment is when Lewandowski referred to Swalwell as “President” Swalwell, as the Democrat representative was the first Democrat presidential contender to drop out of the 2020 democrat race.

Western Journal points out a few more moments where Lewandowski’s sense of humor was on full display, like when New York Rep. Hakeem Jeffries asked him if he was Trump’s “hitman, the bag man, the lookout, or all of the above?”

Lewandowski shot back with “I think I’m the good looking man, actually.”

To top it all off, the Democrats also provided Lewandowski the opportunity to use this farce of “investigative procedures” to promote his own Senate run for New Hampshire. 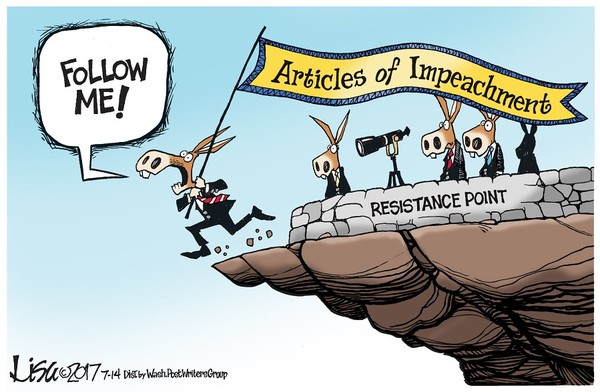 AMERICANS HAVE NO TASTE FOR THIS IMPEACHMENT PUSH

Every poll to date, by multiple polling organizations has shown Americans have no taste for impeachment, so this farce of an “investigation procedure” into whether they should initiate impeachment proceedings, when they don’t have enough House votes, and it would be dead on arrival in the Senate, is political theater, all on the taxpayers dime.