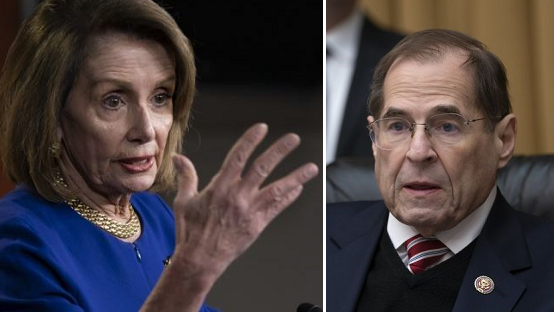 Pelosi’s comments came during a closed-door Capitol Hill meeting of Democrats last week, where she complained that Judiciary Committee aides have advanced the impeachment push “far beyond where the House Democratic Caucus stands,” according to Politico.

“And you can feel free to leak this,” Pelosi added, according to several people who were there.

It was the latest sign of the widening schism between Pelosi and Judiciary Committee Chairman Jerry Nadler, two longtime allies who are increasingly in conflict over where to guide the party at one of its most critical moments.

Both Pelosi and Nadler, who have served in the House together for more than 25 years, insist their relationship remains strong. But their rift over impeachment is getting harder and harder to paper over amid Democrats’ flailing messaging on the topic and a growing divide in the caucus. –Politico

And while Pelosi aides told Politico that Nadler has coordinated with her office on investigations, legal strategy and messaging – and Pelosi has signed off on all the Judiciary Committee’s court filings against Trump, the House Speaker has been expressing skepticism for months that a successful impeachment in the House would only lead to “exonerating” Trump on the campaign trail after the effort dies in the GOP-led Senate.

Pelosi has privately clashed with Nadler over his aggressive impeachment agenda, arguing the public does not support it and it does not have the 218 votes to pass on the House floor. So far, about 137 Democrats say they would vote to open an official impeachment inquiry.

The relationship between the two veteran lawmakers has become strained. While Pelosi has blocked the House from formally voting to open an impeachment inquiry, Nadler declared he is authorized to begin one even without a House vote. –Washington Examiner