Foreign Exchange Trading Soars to $6.6 Trillion a Day, US Dollar is Total King

Foreign Exchange Trading Soars to $6.6 Trillion a Day, US Dollar is Total King by Wolf Richter for Wolf Street

It happens every three years: The Bank for International Settlements released its Triennial Central Bank Survey about the global foreign exchange (FX) and over-the-counter (OTC) derivatives markets, as it occurred in April. The numbers are ginormous, and get more ginormous with every survey, with trading volume measured in trillions of dollars per day. This is a huge data trove, and I will focus here on global FX trading. 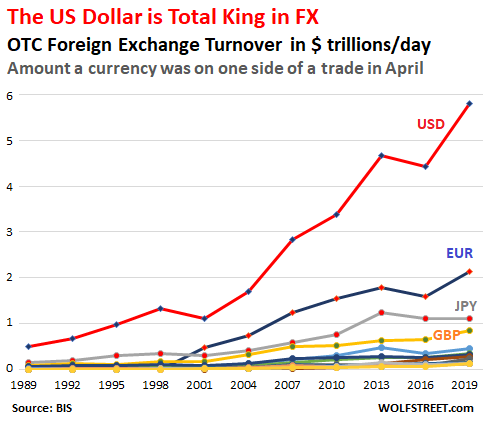 The sudden appearance of the euro in 2001 as the second largest currency out of nowhere indicates that at that time, it had just replaced five currencies, including the biggie, the Deutsche Mark.

The chart above shows the top 16 most traded currencies. Four have a significant share – USD, EUR, Japanese yen (JPY), and British Pound (GBP). The remaining 12 of the top 16 currencies are the limp spaghetti at the bottom of the chart, including the Chinese renminbi (CNY).

In terms of the share that a currency is on one side of a trade, the US dollar remains total King, at 88.3%. Its share has remained relatively stable over the years, despite three factors: