Gold and Oil Blow Sky High At The Opening

With the events of the past 24 hours it is no wonder that these commodities responded the way they did when the markets opened Sunday evening.

As has been reported approximately 50% of the Saudi Arabian oil production was taken off-line on Saturday Sept. 14, 2019 when largest oil fields were attacked by drones.

As ZeroHedge reported on Sept. 14

After the United States was quick to point the finger at Iran for the early Saturday explosions that rocked Abqaiq facility and the Khurais field — forcing production to be shut and with it 5.7 million barrels a day of oil production lost — Iran has warned it stands ready for a “full-fledged” war.

Iranian foreign ministry spokesman Abbas Mousavi slammed Washington for a “maximum pressure” strategy that has turned to “maximum lies,” saying that because of the former’s “failure [the US] is leaning toward maximum lies”. FM Javad Zarif also said these were a continuation of efforts to pressure and shame into compliance under US hegemony.

This sent minor shock waves around the world and major tremors throughout the energy sector. Traders, of course, began licking-their-chops at the prospect of making lots of wealth off the current misery.

As the politicians point fingers, threaten more war and oil burns we the people wonder when the bombings will start and how to protect ourselves from the crushing rise in gas prices that will surely go into effect almost immediately. If we get to the end of the coming without a major spike in gas prices it would not be normal.

As the price of oil spiked right at the opening of the market gold followed suit and silver took note but didn’t react in the same manner as oil and gold. 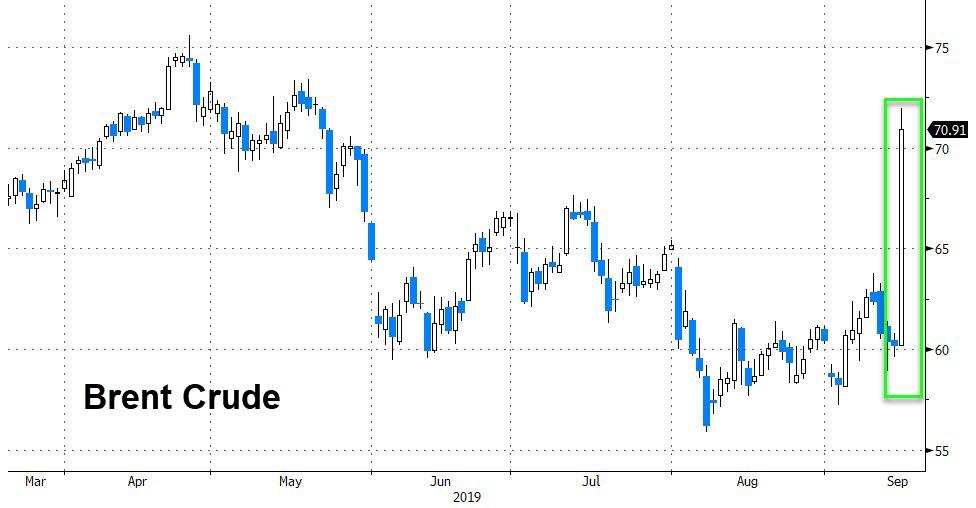 Not only did oil jump up by approximately $12/barrel (20%), gold jumped and is currently still climbing.

We fully expect to see the metals to continue moving higher, at least, as long as the fires are burning. Earlier today, Sunday, the oil fields were close to being contained but not 100%.

With this additional instability being thrown into the mix we see gold having a great week ahead. Gold loves crisis and there is no shortage on the horizon.

This situation will not calm until at least Tuesday or Wednesday and if it continues into the later part of the week look for the metals to respond accordingly. If this situation does somehow, miraculously, get calmed down by mid week then we should see the metals pause and catch their breath before continuing to move on a sustained upward trend. I get the feeling that gold is no longer seeing unicorns and rainbows on the horizon and is going to signal exactly what it sees coming – chaos and crisis. Gold knows the system is broken and there is nothing anyone can do to stop it from telling those that are listening.