David Stockman on the Coming Financial Panic and the 2020 Election

Doug Casey’s Note: David Stockman is a former congressman and director of the Office of Management and Budget under Ronald Reagan.

Now, anyone with connections to the government should elevate your suspicion level. But as you’ll see, David is a genuine opponent of government stupidity. Although his heroic fight against the Deep State during the Reagan Administration was doomed, he remains a strong advocate for free markets and a vastly smaller government.

We get together occasionally in the summer, when we’re both in Aspen. He’s great company and one of the few people in this little People’s Republic that I agree with on just about everything. Absolutely including where the US economy is heading.

I read his letter the Contra Corner every day and suggest you do likewise.

International Man: We seem to be near the top of the “everything bubble.” Almost nothing is cheap… anywhere. What are your thoughts on where people should put their money for prudence and for profit?

David Stockman: I would recommend recognizing that the “everything bubble” is the most extreme, exaggerated, severe financial bubble in world history. It will inevitably collapse, and there will be massive losses, even greater than occurred in 2008 and 2001.

So, the first thing is to stay out of the casino. By that, I mean the financial-market stocks, bonds, and everything else.

These markets are so artificial. They’re just chasing what the central banks are doing. There’s no honest price discoveries or supply and demand; nobody’s discounting the future of economic growth, productivity, and investment. You’ve got the chart monkeys, 29-year-old day traders who are in charge of the market.

When the big correction comes, there are going to be massive losses, and the panic will be great. All correlations will go to 1—which means everything will fall: the good, the bad, and the indifferent.

There’s this old saying among traders that when the cops raid the house of ill repute, they carry out the good girls, the bad girls, and the piano player too. That’s essentially what’s going to happen.

You can’t be saved by picking high-yielding stocks or conservative blue chips or stocks that provide daily necessities like food—it doesn’t matter. Everything’s overpriced right now because of this huge financial distortion.

When the real correction comes and the central banks are revealed to be impotent and powerless, then everything is going to collapse. You’ll be in harm’s way no matter how clever you’ve been in trying to pick and choose. And stay away from the bubble stocks like Amazon or Beyond Meat or any of those.

The time for speculation is over. We’ve had 30 years of central bank subsidized speculation. We’re going to go into the time and era for capital preservation, and that means the highest priority is to not lose money. It’s to keep your capital safe.

I think the only way to do that is in very short-term, liquid instruments.

I don’t think the U.S. government is going to disappear. I don’t think we’re going to have a national bankruptcy or anything like that. There’s going to be a tremendous fiscal disaster coming. But 90-day Treasury bills will continue to pay you their meager interest, and they will be a safe place to put your money.

We have to recognize that the 30-year experiment in what I call “Keynesian Central Banking”—which is almost like central planning—is over.

Therefore, the central banks of the world are going to be in enormous disrepute. They’re not going to be your friends or your savior.

Remember the Time magazine cover from the late ’90s, “The Committee to Save the World”? It had Robert Rubin, Alan Greenspan, and Larry Summers on the cover. They’re now going to be the ogres who destroyed the world. 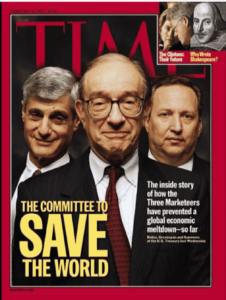 The one thing that Donald Trump is going to accomplish in his misbegotten tenure is that his ferocious attack against the Federal Reserve will tear away the veil that it’s a beyond-politics cabal of geniuses who are safeguarding your livelihood.

He’s going to tear it apart. He’s going to totally besmirch and destroy the credibility of the Fed, at least in the eyes of his base. It’s going to create an enormous political debate about central banking.

Now, he’s coming at it from left field. He’s totally wrong. But Trump is unlike other presidents who were totally choreographed and scripted and moved their lips in the way that their advisors told them to.

And he’s going to go after the Fed. We haven’t seen anything yet. And I relish the prospect. They need to be beat to smithereens with a strong, lethal political club, and that’s Trump. And after the fragments end up all over the cutting room floor, we can figure out what to do next. But you must take down this institution.

The Fed is the number one, the number two, and the number three enemy of prosperity, capitalism, free markets, individual liberty, and the wealth of people in the world today.

Central banks have to be totally discredited and taken down.

The one thing that Trump is going to accomplish—as he desperately struggles for re-election—is he’s going to finally rip off the Band-Aid. We’re going to have a real debate about this awful curse of Keynesian central banking.

International Man: I think that’s the silver lining. For the first time, we have a president who is regularly tweeting about the Fed and bringing it to the attention of average Americans, many of whom have no idea what the Fed is or does.

Will Trump be able to pin the blame for the next recession on the Fed? What do you think the implications are for that?