TDC Note – No -you misunderstood, I said DQ, not QE. You know, Dairy Queen, you moron!!

To push through QE and to preserve his legacy, Mario Draghi just started the countdown on central banking.

Apparently ripping a page out of Jean-Claude Juncker’s play book – “When it’s serious, you have to lie” – outgoing ECB President appears to have been caught in a big fat fib. 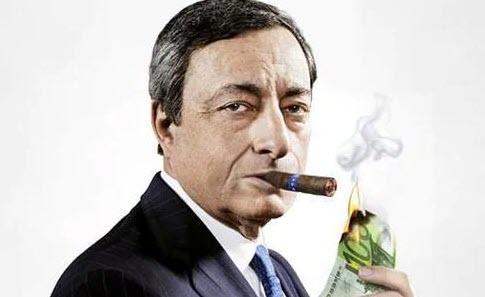 In his grand finale press conference today, Draghi unleashed QEternity (albeit with the limits we have noted), proudly proclaiming that “there was no need to vote” because there was “full agreement on the need to act” and a “significant majority” were for QE.

When pressed by a reporter, he further refused to detail who dissented – apparently signaling that it was as good as consensus as it could be.

“There was more diversity of views on APP. But then, in the end, a consensus was so broad there was no need to take a vote. So the decision in the end showed a very broad consensus.

As I said, there was no need to take a vote. There was such a clear majority.”

It turns out – he lied (just as he lied to Zero Hedge when he said there was no Plan B over Greece… when there was).

Bloomberg is reporting that in an “unprecedented revolt”, ECB governors representing the top European economies defied Mario Draghi’s ultimately successful bid to restart quantitative easing, according to officials with knowledge of the matter.

The unprecedented revolt took place during a fractious meeting where Bank of France Governor Francois Villeroy de Galhau joined more traditional hawks including his Dutch colleague Klaas Knot and Bundesbank President Jens Weidmann in pressing against an immediate resumption of bond purchases, the people said. They spoke on condition of anonymity, because such discussions are confidential.

Those three governors alone represent roughly half of the euro region as measured by economic output and population. Other dissenters included, but weren’t limited, to their colleagues from Austria and Estonia, as well as members on the ECB’s Executive Board including Sabine Lautenschlaeger and the markets chief, Benoit Coeure, the officials said.

Indeed, as Reuters adds, the QE motion was actually passed with a “relatively narrow majority” which explains why Draghi refused to take a vote as it would show that only Europe’s B and C grade nations – such as Italy, Spain, Portugal, Estonia, Malta and Cyprus – were for a restart in debt monetization.