Gold and the ‘Real’ Interest Rate

Gold and the ‘Real’ Interest Rate from The Speculative Investor – Blog

[This blog post is an excerpt from a commentary published at TSI on 1st September 2019.]

It’s well known that the US$ gold price often trends in the opposite direction to the US real interest rate. This relationship is illustrated by the following chart in which the real interest rate is represented by the yield on the 10-year TIPS (Treasury Inflation Protected Security). 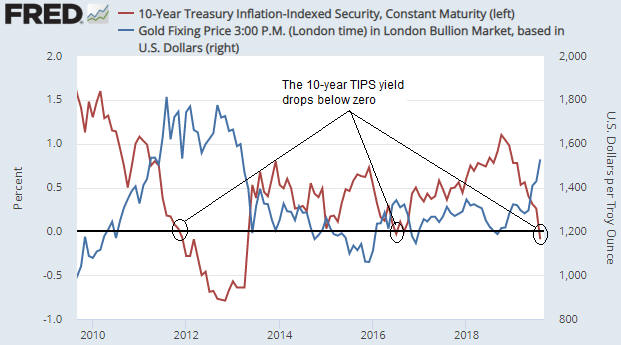 Considering only the 2016 case the answer to the above question seems obvious, because in July-2016 the TIPS yield reversed course and began trending upward soon after it dipped into negative territory. In other words, the downward reversal in the gold price coincided with an upward reversal in the real interest rate. However, in 2011-2012 the real interest rate continued to trend downward for more than a year after the gold price peaked.