Democrats NEED To Push ‘Race’ To Divide America To Have Any Chance Of Winning 2020 By John C. Velisek – US Navy, Retired – All News Pipeline

The ruling class has declared that the greatest challenge to civility in our country is the majority of white males in our country that are “white supremacists.” The ‘progressive socialists‘ have called those members of our society violent. It is clear that anyone who the leftist elites dislike enough will be tarred with the label “White supremacist.” If you are unfortunate enough to be labeled as such, you can expect to at the very least be shamed and protested. The intention is to use the strong-arm tactics that they can employ with impunity to silence any opposition, to violate the free speech rights and to malign anyone who disagrees.

The federal government knows that the number of white nationalists groups are very few. What the progressive socialists have done is designate any group they need to as white nationalists. Groups that have black, Hispanic, gays and Jewish members have been called white nationalists. Not mentioned is the all-white groups such as Antifa who are the actual fascists within our country.

Social media is complicit in giving the cover to the progressive socialists to ban citizens who consider themselves patriots and question the order that they look to force on the American people. They will use watch lists to destroy careers and to ruin reputations with lies and innuendo. The progressive socialists and media will label anyone who donates to President Trump as white supremacists hoping to stop both the donations and anyone who may support Trump. Joe Scarborough on MSNBC has already stated that if you support Trump, you are funding white supremacy.

The progressive socialists deep within the Democrat Party have made hating white people a dominant part of the party platform. They do not feel that they need any white votes other than the low information snowflake vote. They can depend on the black majority and the votes of as many illegal aliens they can get through the system. But the question is, will this work when the progressive socialists also demean black Americans who do not resent white America? African-Americans are starting to understand that this administration is leading the way in the upward mobility of all Americans. In all the screaming we hear about “white nationalism” and “white supremacy“, it is the progressive socialist Democrats that have taken the black vote for granted. Promising to do everything they can to make things better during elections, and soon forgetting them afterward. It is the leftists who exclude those who they feel are inferior and use the moral superiority they feel to demand we follow them. 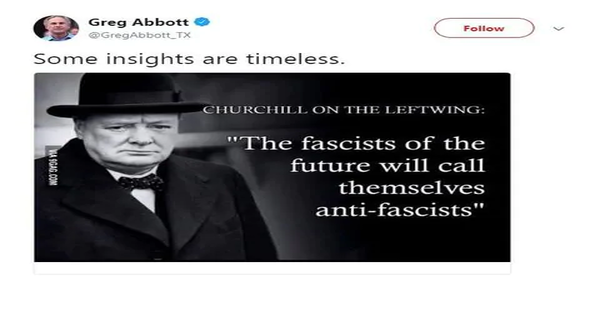 It is the foundational idea of the progressive socialists that if you are white and disagree with the leftists, that you are the reason for the terrorism in the country today. If given the opportunity, they will use every agency of the federal government to surveil you, your friends, your business associates, and anyone else they deem necessary. There have already been discussions of designating anyone who may identify as following white supremacy ideology to assess whether you will take a turn towards violence. The first requirement for this special attention is to be conservative. If you are a liberal brown shirt such as Antifa, you will be ignored and allowed to continue beating older men and women with your face covered and no law enforcement to step in. This pre-emptive assessment will be used in conjunction with red flag laws to leave you defenseless in the face of the coming onslaught.

Patriots are now being classified by our universities and the Department of Homeland Security as right-wing extremists because you are suspicious of the federal government. Believing in individual liberty and freedoms is another reason to be declared an extremist. You can be declared a right-wing terrorist because of your religious affiliation, and of course, being accused of being a white supremacist. It has clearly been shown that if you are targeted by the ruling class, they will take your guns and even your livelihood without due process or the ability to use the rights that have been afforded the citizens of this country by the founding fathers.