Read Between The Lines When Globalists Push For A ‘Post Human Future’ While Emphasizing: ‘The End Is Already Beginning!’

In this August 25th story over at NBC News, they reported that while for thousands of years, human beings have reigned over our planet as the only intelligent and self-aware species, ‘that could soon change, perhaps in our lifetimes‘ and as their story reported, ‘not long after that, homo sapiens could vanish from the Earth entirely‘.

Also reporting that ‘Cyborgs will replace humans and remake the world‘ and ‘Our supremacy as the prime understanders of the cosmos is rapidly coming to end‘, that NBC story was just one of several that has come out within the past few weeks reporting we are rapidly entering a ‘post-human age‘.

As NBC reported, author James Lovelock explains in his new book called “Novacene“ that those who will rule over the future ‘will have designed and built themselves‘ with Lovelock claiming ‘the self-sufficient, self-aware descendants of today’s robots and artificial intelligence systems‘, what he calls the ‘Novacene‘, which literally means the ‘new new age‘, will be the ‘new supremacists‘ of that ‘new new age‘ that doesn’t include ‘homo sapiens‘.

So while leftists and the msm continue to insanely scream ‘white supremacist‘ about what’s happening in America today, with a wise shift in America towards ‘nationalism‘ and the abandonment of ‘globalism‘ and all of its failures, the ‘supremacists‘ of the future likely won’t be fully ‘human‘ at all. And as the NBC News story warns, soon after that time, there may not be any room for human beings in the world, left nor right, we’ll all simply be looked at by the ‘new rulers‘ of our planet as part of the background, like the trees or plants are to most human beings.

The following excerpt comes to us from their story in a section titled “The end is already beginning“.

The first stages of the Novacene are already underway, Lovelock argues. He cites the example of AlphaZero, a computer program that taught itself to play the game Go — and then quickly went on to become the world’s best Go player. Today’s computers can already process data far faster than we can; with fully independent artificial intelligence, he says, tomorrow’s cyborgs will easily become a million times smarter than we are.

Lovelock imagines cyborgs filling every evolutionary niche on the planet. “I think of cyborgs as another kingdom of life,” he says. “They will stand to us in much the same way as we ourselves, as a kingdom of animals, stand to plants.”

What would cyborgs look like? Lovelock is intentionally vague because he expects that they’ll rethink the basic rules of design in ways that we puny humans cannot imagine. “Cyborgs would start again; like Alpha Zero they would start from a blank slate,” he writes in his book. He speculates that they might look like spheres, though when pressed he says, “It’s entirely possible they would have no form at all,” existing mostly as virtual forms inside computers.

Whatever their form, the cyborgs will be so far beyond us in intellect that they may dismiss us as part of the planet’s background landscape. Alternatively, they might appreciate us in much the way that we appreciate plants. This possibility appeals to Lovelock, who likes to spend days in the garden around his cottage home in Dorset, England. “Think about the way you go to a great arboretum,” he says.

Once established, the cyborgs will remain dominant on our planet. “The Novacene,” Lovelock says, “will probably be the final era of life on Earth.”

And while that might sound like a huge stretch to some and an impossibility to others, four new stories out over the past week+ show us how insanely fast we’re already moving towards that monstrous possibility of a morphing between man and machines whether we like it or not. We’ll take a look at each of those stories in much more detail further below but first, their titles.:

“Scariest Thing You’ll Read All Day”: Report Sounds Alarm Over Brain-Reading Technology and Neurocapitalism “Your brain, the final privacy frontier, may not be private much longer.

“Brain-reading tech is coming. The law is not ready to protect us. In the era of neurocapitalism, your brain needs new rights.

Mind-reading AI may spell end to humanity as we know it, but not because it will enslave us 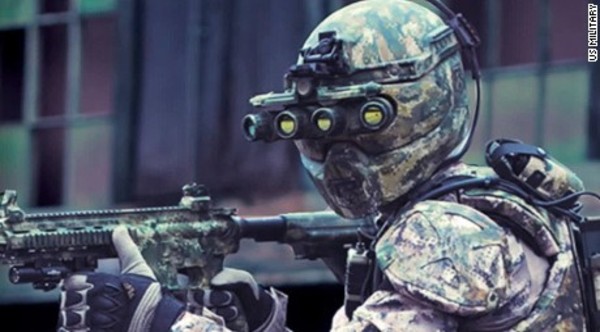 While some might believe ‘Cyborgs‘ to be a long way off still, all the way back on March 7th of 2016, CNN published this story titled “US Military Spending Millions To Make Cyborgs A Reality“ via the development by DARPA of an advanced ‘brain implant‘ that would allow a human brain to communicate directly with a computer.

And while CNN reported that a spokesman for DARPA had claimed that the program wasn’t intended for military applications and was instead to be focused upon assisting injured US Veterans who may have lost the use of their limbs or other body functions due to wartime injuries, does anybody really believe that will be the case with the health of US Veterans even now put behind that of illegal immigrants by Democrats in America and the ‘deep state‘ always seeking the next military advantage? From the CNN story.

The goal of the proposed implant is to “open the channel between the human brain and modern electronics” according to DARPA’s program manager, Phillip Alvelda.

In January, DARPA announced it plans to spend up to $62 million on the project, which is part of its Neural Engineering System Design program.