‘The Next Great Extinction Event Will Not Be Global Warming, It Will Be Global Cooling’

‘The Next Great Extinction Event Will Not Be Global Warming, It Will Be Global Cooling’ By Stefan Stanford – All News Pipeline

With The Pentagon Unleashing DARPA To Fight ‘Fake News & Disinformation’, Remember This!

With ‘apocalyptic‘ hurricane Dorian’s slow crawl towards the United States with its 200+ mile per hour winds shoving the Amazon fires off of the ‘front page‘ of the ‘climate alarmists radar‘ as DB Daily Updates reports in this new story that Whatfinger News had linked toMonday morning, we’re going to be taking a look within this ANP story at ‘climate change‘ considering that the United Nations has their major ‘Climate Change Summit‘ coming up in September and this new report that the US military has just unleashed DARPA in an effort to fight ‘fake news & disinformation’.

With that group of ‘climate change skeptics‘ including those who have said that it is not possible to project global climate accurately enough to justify the ranges projected for temperature and sea-level rise over the 21st century as well as scientists who have said that the observed warming is more likely to be attributable to natural causes than to human activities, it’s clear that even amongst the so-called scientific ‘experts‘, there is a huge amount of disagreement upon ‘climate change‘ so how might DARPA handle that in determining what is ‘fake news‘? Will DARPA just run with the globalist/democrats talking points even if totally false?

Let’s first take a look at this DB Daily Updates story before looking below at a totally alternative theory on climate change that would make most leftists heads split. Rather than ‘global warming‘ being the biggest threat that our planet faces as many leftists claim, it’s ‘global cooling‘ we should be much more concerned about.

The only positive thing about Hurricane Dorian is that it gives the Climate alarmists something to virtue-signal about other than the Amazon rain forest fires. – Hey, at least Hurricane Dorian is the real deal. Still, Dorian’s a big deal, one that is pounding the Bahamas as I write this, and no one in its path should take it lightly. It’s a real danger to human lives.

Then there are the fires in the Amazon rain forest, which have over the last 30 days been the subject of a major, focused campaign in the media to stoke climate alarm. Unlike Dorian, this is not a real thing, at least in the way the media and our celebrity virtue-signalers have portrayed it. The media has, of course, focused its efforts on trying to blame the entire problem on the government of Brazilian President Jair Bolsonaro who, like President Donald Trump, is a populist. What a surprise, right?

Yes, the number of fires in the Amazon are up in 2019 as compared to 2018. Yes, they are slightly above the 10-year average. But, as you can see in the chart below, they are way down from most years during the first decade of the 21st century, a time during which Brazil had a socialist government, a time during which no one in the Climate alarmist community or our fake news media attempted to blame Amazon fires on the Brazilian government. Funny how that works.

And while the number of fires in Brazil may be up slightly in 2019 as seen in the chart below in comparison to 2018, even NASA has admitted that the area burned by wildfires all across the planet in 2019 has dropped by 25% according to this new story over at the Washington Times. 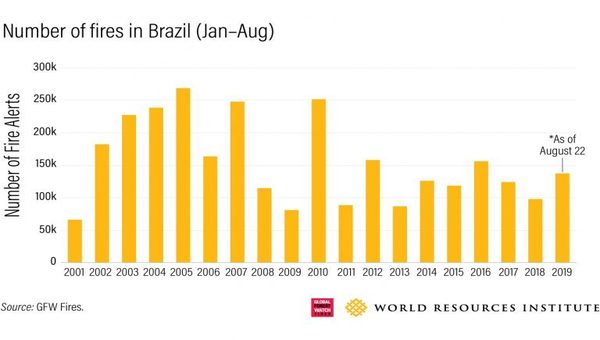 According to this new story over at Breitbart that Steve Quayle had linked to on his website Monday morning, Pope Francis has just issued an emergency appeal for ‘drastic measures‘ to combat what he and the globalists are now calling a ‘combat emergency‘, a term designed to further frighten the masses since ‘climate change‘ and ‘global warming‘ no longer do the trick as Celeste warns in this new SQAlert.

As Breitbart reported, according to the Pope, “Human beings have caused a climate emergency that gravely threatens nature and life itself” and while the Pope mentioned nothing of the proof we now have that government’s can modify the weather as reported in this August 31st ANP story, the Pope’s words echo those we’ve been hearing from the left over and over again for the past 10+ years despite much scientific objection to the ‘global consensus’. Once again, from this story over at DB Daily Updates.: