Coming up we’ll hear some very interesting comments from a first-time guest, Jeffrey Christian of the CPM Group. Jeff talks about who’s been buying gold, and who hasn’t been – at least not compared to levels of a few years ago, tells us why they’ve moved up their price forecasts for gold and silver a couple of years, and also answers the question about whether or not he believes there is widespread manipulation in the precious metals markets. You’ll want to be sure to stick around for my conversation with Jeff Christian, coming up after this week’s market update.

As investors glean takeaways from the Jackson Hole symposium this week , gold and silver markets are bouncing off of some near-term technical support levels.

Gold prices sold down to the $1,500 level on Thursday. As of this Friday recording, the monetary metal trades at $1,527 an ounce, up sharply today and now showing a 0.8% gain for the week. Silver prices are also closing the week on an up note and are coming in 1.9% higher now so far this week to bring spot prices to $17.52 per ounce.

Turing to the platinum group metals, platinum now shows a weekly gain of 1.6% to trade at $867, while palladium is putting in a 1.2% advance to trade at $1,471 per ounce, although it is actually down nearly $20 today and acting like a bit of an outlier compared to the other precious metals here on Friday.

As for Jackson Hole, Federal Reserve chairman Jerome Powell headlined a list of other central bankers, academics, and financial elites at the annual Wyoming gathering. Powell was widely expected to signal a rate cut ahead during his speech on Friday. But many on Wall Street and in Washington were hoping he would make a bigger, broader commitment to monetary stimulus.

President Donald Trump is urging the Fed to slash rates by 100 basis points. On Tuesday, President Trump also said he would consider new tax cuts to stimulate the economy. The following day, he appeared to change his mind, saying we don’t need tax relief after all because “we have a strong economy.”

Perhaps he will change his mind again if new warning signs of a recession flash. Or if the Federal Reserve stubbornly refuses to provide the monetary stimulus the president has been pushing for ahead of his re-election effort.

One idea that was under consideration by the White House and perhaps will be again in the future: a payroll tax cut. Reducing federal withholdings from paychecks would put money back in the pockets of workers to spend into the economy. A temporary payroll tax cut has garnered bipartisan support in the past as a stimulus measure. But anything that might put some money back in the pockets of taxpayers and boost the economy ahead of the 2020 election is now likely to garner stiff resistance from Democrats in Congress.

Another tax cut proposal on President Trump’s desk would index capital gains to inflation. The beauty of this proposal is that it could be accomplished by the Treasury Department through a rule change at the administrative level – bypassing the need for legislation to be passed by Nancy Pelosi and the Democrats. Of course, if this occurs, they would likely sue the Administration for cutting taxes unilaterally — and that will put the Democrats in a tough position with voters.

Under current law, nominal gains on assets including stocks, real estate, and precious metals are taxable events – even if those gains are entirely the result of the currency losing value.

For example, if you sell a gold coin for 25% more dollars than you originally paid for it… but the cumulative impact of inflation has also reduced the value of those dollars by 25%, then you have no gain in real terms. The gold coin retains the same purchasing power as when you bought it. Yet you could still owe taxes on it.

When the government gets to tax its own inflation, it makes it doubly difficult for investors to get ahead in real terms.

Indexing taxes to an inflation rate would certainly make for a fairer system, but it wouldn’t stop the inflation itself. The government could also sneak back in an inflation tax by understating the actual inflation rate – similar to how it reduces real Social Security benefits by indexing cost of living adjustments to a manipulated Consumer Price Index.

In order to stop the government from abusing its power to inflate, the Federal Reserve must be stopped from creating unbacked currency out of nothing. A move toward a non-inflationary sound dollar isn’t likely to happen anytime soon. However, it may be politically feasible to change the unfair tax treatment currently applied to hard money.

Earlier this year, Congressman Alex Mooney of West Virginia introduced the Monetary Metals Tax Neutrality Act of 2019. The bill would exempt most physical gold and silver bullion from taxes on gains – putting sound money on a level playing field with the fiat dollar, which isn’t taxed when sold or exchanged in commerce.

A more modest first step toward treating precious metals more fairly in the tax code would be to end the application of the arbitrary 28% “collectibles” rate. Last year, Congressman Mooney got United States Mint Director David Ryder to agree that abolishing the discriminatory tax rate on precious metals would help the coin investing community.

Rep Alex Mooney: As you know, the IRS currently classifies these precious metals and coins as collectibles, like Beanie Babies and baseball cards, and then requires taxpayers to report capital gains, which are taxed at a discriminatory high collectibles rate of 28%. My view, which is backed up by language in the U.S. Constitution is that gold and silver coins are money, and indeed these American Eagle coins are legal tender. If they are indeed U.S. money, it seems to just be no taxes on them at all, so why are we taxing these coins as collectibles?

David Ryder (U.S. Mint Director): That’s a very good question. I would like to see. It would help our investor community, collector community if it weren’t taxed.

Changing or abolishing the collectibles rate itself would require an act of Congress. But the Trump administration could go around Congress by instructing the IRS to stop classifying non-collectible bullion products as “collectibles.” Doing so would get rid of an arbitrary tax code interpretation by IRS bureaucrats that makes no logical sense.

The total taxes collected on precious metals transactions in any given year are a tiny fraction of the capital gains taxes generated by conventional investments that are eligible for lower long-term rates. Treating physical bullion the same as stocks for tax purposes wouldn’t have a meaningful impact on overall federal revenues. But doing so would be a huge gesture of fundamental fairness toward a community of investors that is often looked down upon by Wall Street and the political class.

Many gold and silver bugs turned out in 2016 to vote for Donald Trump. Although he isn’t exactly pursuing sound money policies from the Oval Office, he does retain a significant amount of popularity within these circles. In fact, Money Metals exclusive 1-ounce Donald J. Trump presidential silver round is one of our more popular items. We will soon introduce a gold Trump round as well, stay tuned in the coming weeks for details on that new product.

Surely, Trump would agree that it’s wrong for the IRS to punish patriots who hold Trump silver and gold rounds – and other forms of precious metals. 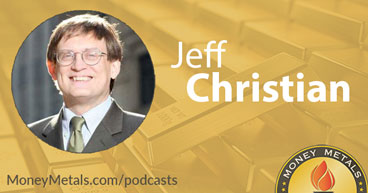 Mike Gleason: It is my privilege now to welcome in Jeffrey Christian of the CPM Group, a leading commodities research consulting, investment banking and asset management company. Since its founding in 1986, CPM has provided fundamental analysis of global commodity markets and it’s perhaps best known for its research and analysis of the metals markets, along with its overall economic analysis of a number of different commodities and offers its research for commercial hedgers and for institutional and high net worth individual investors.

Jeff, thank you very much for coming on today and welcome.