China’s Orwellian Social Credit System Is A Huge Warning To America, Giving Us A Great Reason To Prepare While We Still Can By Stefan Stanford – All News Pipeline

– The Way We’re Headed, It’s Only A Matter Of Time Before THIS Fully Arrives In America!

In this August 18th story over at Activist Post that Steve Quayle had linked to on his website on Monday morning, Chris Menahan reports upon a stunning announcement made by the Global Times; the nation of China had banned 2.56 million people, who they term ‘discredited entities‘, from purchasing plane tickets during the month of July while another 90,000 ‘entities‘ had been banned from buying high-speed rail tickets in July as well.

As the Activist Post story reported in its’ opening sentence, “this is the system our ruling oligarchs are trying to implement in America“. And with ‘big tech‘ already implementing their own form of ‘social credit‘ system where they have been cracking down upon and censoring Christians and Conservatives simply for their political and religious views, while censoring and doing anything they can to punish websites such as ANP who publish news which they disagree with and don’t want the masses to know, Paul Joseph Watson warns in this new story that the way we’re quickly headed, it’s only a matter of time before THIS arrives in the West.: 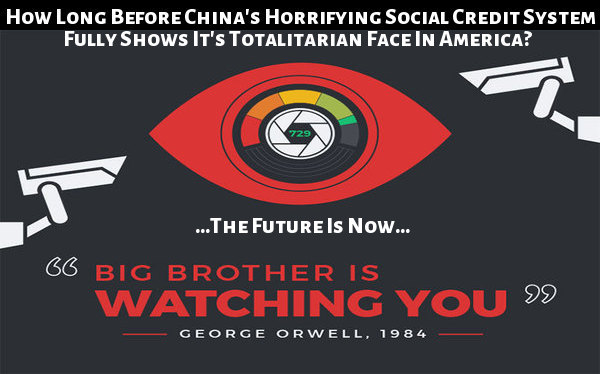 Imagine going to buy groceries with your credit card, but then having your payment declined because someone in an office in San Francisco thinks you posted something “hateful” on the Internet.

And while you may think that possibility to be a stretch here in the USA, we’ve already been rapidly hurdling in that direction and as Watson reports, “while many on the left and in the media decry China’s Orwellian social credit score system, they simultaneously advocate for a similar thing in the west, where people are deplatformed and have their right to engage in commerce revoked because of their political views.”

Yet while Conservative/independent news websites attempting to get the truth out to Americans are punished, censored and de-platformed, as Menahan also reported within his story, “on the other hand, media outlets which push propaganda in accordance with the desires of our ruling oligarchs are rewarded by having their content algorithmically artificially boosted and handed millions of dollars.”

So we’ll be taking a look within this story at not only where China is now, giving us a taste of where the ‘oligarchs‘ are attempting to take America in the ‘present‘ to ensure the globalists ‘desired future‘ for our country, but we’ll also re-visit the website Deagel.com, which has been bizarrely forecasting the United States to have a major ‘depopulation event or events‘ over the next few years which takes our 320+ million population down to only 100 million by 2025 as well as forecasting America to be a 3rd world nation by 2025.

Before proceeding, let’s first take a look at this story over at Bored Panda titled “Here’s How China’s ‘Social Credit Score’ Punish And Reward Citizens, And It Sounds Like Dystopian Fiction” to get a look at just how China is punishing their own people based upon ‘behaviors‘, some as simple as distrusting the government.

The ‘Dystopian future’ is here, and there’s literally no escape from it. While European countries fight for the safety of personal data on the Internet, China has adopted a Big Brother-style country-wide people tracking system. And we don’t mean the simple surveillance cameras as the Chinese took it to a whole another level with facial recognition and gait tracking so smart that you would never be able to cheat on.

Well, the tracking part might be counted as a security measure, but where the facial recognition software data is actually used is absolutely mind-blowing. The government records your credit history, fulfillment capacity, identity characteristics, social relationships, behavior and preferences, and based on your choices they will give you a social score from 350 to 950. If you fall into the ‘good citizen’ category with a score of more than 700, you’ll get better loan rates, you can skip queues, rent things without a deposit and even get better matches on dating sites. If you fall into the ‘bad’ category with lower scores you may be restricted from well-paying jobs, your kids will not be able to go to a good school and not only you’ll be banned from buying domestic flight tickets but also leaving the country. If that isn’t scary, we don’t know what is.