In this very important August 7th story over at the website of Paul Craig Roberts, Ronald Reagan’s former Assistant Secretary of the Treasury for Economic Policy, Roberts reports that much of what we’ve been witnessing across America recently has been an open invitation to tyranny following the release of an FBI document which characterizes ‘conspiracy theories‘ as a potential form of ‘domestic terrorism‘, with Roberts warning: In effect, the FBI’s document reduces the First Amendment, that is, free speech, to the right to repeat official and prevailing explanations. Any other speech is a conspiratorial belief that can lead to the commission of a crime.

For those who haven’t yet read it, we’ve embedded that FBI document at the very bottom of this story in full for you to read yourselves to form your own opinion about what their document means yet as we had reported on ANP back on August 3rd within this story titled “Is This The ‘Atom Bomb’ That Will Take Down The 1st Amendment And America? With The FBI Dropping This New Bombshell, Let’s Talk ‘Conspiracy Theory“, corrupt politicians and corrupt government agencies will quickly label any true stories about their corruption as ‘conspiracy theories‘ in an attempt to destroy those who are seeking truth.

And then comes the big BUT which we’ll be happy to emphasize again and again.:

And as we’ll explore within the remainder of this ANP story, with ‘truth now treason in the empire of lies‘ and the globalists who’ve long been hiding ‘truth‘ pushing to have it vanquished from America, much of what has long been called ‘conspiracy theory‘ by the mainstream media and ‘official agencies‘ is very real indeed, with our focus within the remainder of this story on ‘Rex 84‘, ‘Main Core‘and official US government plans for the ‘mass roundup of Americans‘ most would still call ‘conspiracy theory‘ in 2019 at a time when Democrats are pushing ‘red flag gun laws‘ which basically amount to a repeal of the 2nd Amendment ‘Soviet-Union-style‘. 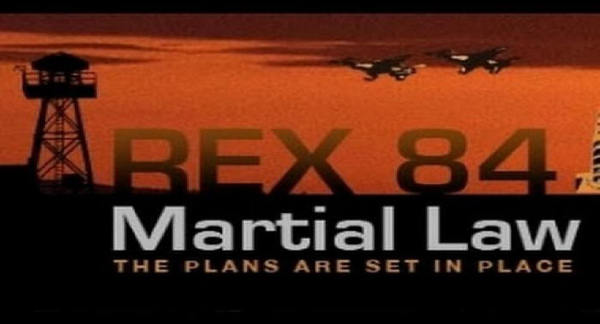 As we had reported on ANP on August 17th, while the mainstream media and most Americans would call it ‘conspiracy theory‘, there has been a very real plan in place for decades to destroy America’s national sovereignty and push us into a totalitarian ‘communist state‘. Yet like America’s Founding Fathers intended, Americans should be very well prepared to repel any totalitarianism or tyranny creeping into our nation.

Thus, for decades now, the ‘deep state‘ has expected ‘resistance‘ to such plans so they put several different programs into place to ‘quell‘ such resistance once the ‘globalists totalitarian end game‘ was enacted, including ‘Main Core‘ and ‘Rex 84‘ among them. Let’s first take a look at ‘Main Core‘ via Wikipedia.:

Main Core is the code name of an American governmental database that is believed to have been in existence since the 1980s. It is believed that Main Core is a federal database containing personal and financial data of millions of United States citizens believed to be threats to national security.  The data, which is believed to come from the NSA, FBI, CIA, and other sources, is collected and stored without warrants or court orders. The database’s name derives from the fact that it contains “copies of the ‘main core’ or essence of each item of intelligence information on Americans produced by the FBI and the other agencies of the U.S. intelligence community”.

As of 2008, there were allegedly eight million Americans listed in the database as possible threats, often for trivial reasons, whom the government may choose to track, question, or detain in a time of crisis.

Rex 84, short for Readiness Exercise 1984, was a classified scenario and drill developed by the United States federal government to detain large numbers of United States citizens deemed to be “national security threats”, in the event that the president declared a National Emergency. The plan was first revealed in detail in a major daily newspaper by reporter Alfonso Chardy in the July 5, 1987 edition of the Miami Herald. Possible reasons for such a roundup were reported to be widespread opposition to a U.S. military invasion abroad, such as if the United States were to directly invade Central America. To combat what the government perceived as “subversive activities”, the plan also authorized the military to direct ordered movements of civilian populations at state and regional levels, according to Professor Diana Reynolds.

Existence of a master military contingency plans (of which REX-84 was a part), “Garden Plot” and a similar earlier exercise, “Lantern Spike”, were originally revealed by journalist Ron Ridenhour, who summarized his findings in an article in CounterSpy.

Contingency plans by the US Government for rounding up people perceived by the government to be subversive or a threat to civil order have existed for many decades. For example, from 1967 to 1971, the FBI kept a list of over 100,000 people to be rounded up as subversive, dubbed the “ADEX” list.

And while we’d love to see some kind lists created of anti-America politicians who’ve committed treason against our nation, or a list of the ‘trojan horse Islamic terrorists‘ who got into America during the Obama administration, so that they can either be prosecuted to the fullest extent of the law for treason or be rounded up and deported before they’re able to launch terror attacks against innocent Americans, many have warned that the ‘perceived enemies of America‘ on any official US government list can be surmised by taking a look at the state of Missouri’s MIAC Report demonizing Patriots or looking at many other official US government documents.