Crisis Ahead by Martin Armstrong for Armstrong Economics

The world is in a complete midlife crisis or some may say an end of life crisis. I am overseas as the world is simply going nuts. At times, I feel more like a shrink having to reassure people that it will all be OK. Both Europe and Asia are having a very bad string of days.

Asia is concerned that China will intervene in Hong Kong. Protesters in Hong Kong seem undeterred by China’s thinly veiled threat of sending in the armed forces. But Beijing would pay a steep price if it were to send in troops politically. Trump has stated that he regards it as an internal matter for China, while even Mitch McConnell said sanctions would be appropriate. Footage has surfaced on the Chinese internet showing columns of armored vehicles heading south and converging on the city of Shenzhen. The videos seem to suggest that the Chinese People’s Armed Police Force, a heavily armed paramilitary unit, is gathering on the Hong Kong border.

There is a great concern in Asia that if China sent in troops to Hong Kong, this will set off a crisis in confidence in Asia as a whole and may lead to the decline in the yuan and an even a break in the Hong Kong peg. 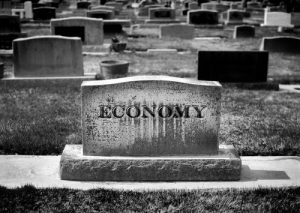 Meanwhile, back in the old world, the EU seems more intent on preserving their power than any rational review of economics. They seem to be doing whatever they can to bury the European economy under this crazy idea of federalizing Europe in a half-ass way that still leaves the individual states in an impossible position to ever reach a unified agreement about anything.

Moreover, the former Chancellor Philip Hammond has accused the PM of trying to wreck the chance of a new Brexit deal, by making demands the EU could never accept.