While we at ANP and many other Independent News websites have documented the ongoing decline of the liberal establishment media in the aftermath of the 2016 presidential election, from “fake news” reports to the increasing liberal activism, as many of their pundits became infected with Trump Derangement Syndrome and set themselves up as the opposition party AKA the propaganda arm of the DNC, we note they may have finally reached the tipping point of no return.

A few recent public displays of outright craziness by MSM personalities exemplifies the point that the ongoing media meltdown that has been occurring over the course of the last three-plus years, is now complete.

Reference: “Fredo” insult stems from the movie ‘The Godfather’ where Fredo was the dumb and weak brother.

Well start with CNN, where time after time, on-air personalities have called people like Congressman Devin Nunes, and Donald Trump Jr., “Fredo,” during different show segments, once on Chris Cuomo’s own show.

Co-founder of the Federalist, Sean Davis, highlighted at least three times that people were called “Fredo on CNN: “Devin Nunes was referred to as “Fredo” on CNN in March. CNN’s David Gregory compared @DonaldJTrumpJr to “Fredo” in February. And in January, CNN’s Ana Navarro referred to @DonaldJTrumpJr as “Fredo”…to Cuomo on his own show.”

In fact, back in January 2019, Cuomo Prime Time’s official and verified Twitter account posted a video of a portion of his show where a pundit referred to Donald Trump Jr. as “Fredo,” and highlighted the video with the quote itself, saying “.@ananavarro slams Don Jr. for likening border wall to zoo fence: He’s an “entitled, rich, spoiled little brat whose only call to fame is being his daddy’s son.” “[D]addy kept Fredo back home…Who cares what [he] says. I don’t want to talk about that entitled little brat.”

On August 12, 2019, YouTube personality “THAT’S THE POINT with Brandon” published a 2:09 minute video that someone sent to him of a confrontation between Cuomo and another man that called him “Fredo,” in which Cuomo loses his mind, threatens to throw the man down the stairs, and attempts to claim that the term “Fredo,” is an ethnic slur against Italians, comparing it to “the N-word.”

The video description states “Footage sent in by a TTP fan. A fan of news went to ask Chris Cuomo for a photo, mind you the man who asked him DID NOT know his real name and knows of him only through The RUSH LIMBUAGH SHOW and on that show Rush repeatedly calls him “FREDO” so the man legitimately thought his name was FREDO. At this point CHRIS CUOMO LOSES IT AND THREATENS THE MAN WITH VIOLENCE!”

Video below and MAJOR LANGUAGE WARNING as Cuomo drops F-bomb after F-Bomb during his ranting and raving.

“Fredo” became the top trending hashtag on Twitter almost immediately, and people from the right and the left, and other Americans of Italian descent, took Cuomo to task for claiming “Fredo” was an ethnic slur, rather than just an insult of someone’s intelligence.

This brings up two very important points: 1) Cuomo, being a radical liberal, seems to enjoy the same mindset as Antifa goons, where commentary, insults, or anything spoken that offends them or hurts their little  feelings, can be cause to threaten physical assault and bodily harm, and; 2) CNN is standing by Cuomo, claiming that his threatening violence against someone over an “ethnic slur,” was “defending” himself.

CNN VP and spokesman, Matt Dornic, responded on Twitter, with the statement “Chris Cuomo defended himself when he was verbally attacked with the use of an ethnic slur in an orchestrated setup.  We completely support him.”

We haven’t seen any statement from CNN on why their own network allows their pundits to use that same “ethnic slur” (which it isn’t, it is just an insult) against a sitting Congressman or the President’s son. 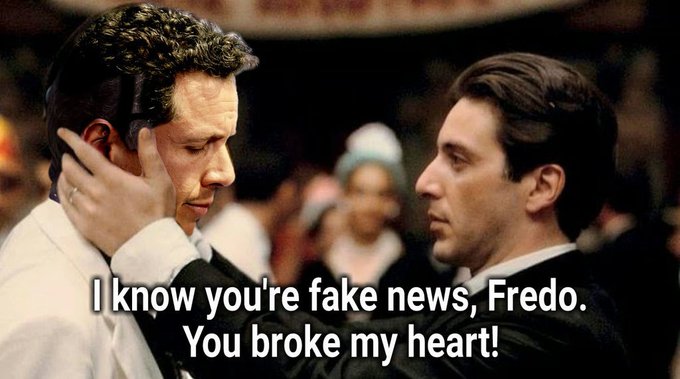 Of course, Twitter being Twitter, this whole fiasco gave meme makers a bit of entertainment, kicked off by GrrrGraphics Cartoons, who posted the one above with the message “Fredo, Cuomo, Fredo, Cuomo ‘I’m smart and I want respect or “I’ll f*ckin ruin your shit.’ Post your best memes!”